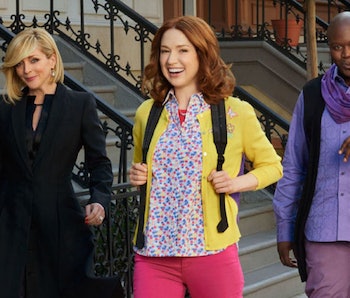 Last January, The Unbreakable Kimmy Schmidt ended its run after Season 4, and for once it wasn't because Netflix pulled the plug. The show ran its natural course and the creators decided to end it and move on. That may explain why, a year later, Kimmy Schmidt will be back on Netflix on May 12 with her own interactive special.

Kimmy vs. the Reverend is an interactive special featuring Ellie Kemper and Jon Hamm in the titular roles, with the original cast returning and quite a few guest stars including Daniel Radcliffe, Amy Sedaris, and Fred Armisen. It will bring back the optimistic Kimmy and her friends as they once again face her former captor, Reverend Richard Wayne Gary Wayne. While it's far from the first interactive special Netflix has released in conjunction with an original series, it's the first foray into comedy.

The interactive special has a finicky history with Netflix. The technology was tested with some kids shows but didn't get its big debut until Black Mirror: Bandersnatch, which met with mixed reviews. The issue with the interactive feature in a drama like Black Mirror is eventually it becomes less of a television show and more of a full motion video video game: there's a competitive aspect that lessens the immersive quality of the show. This is why it worked well in children's content, but not quite in Bandersnatch.

The next big ticket interactive special was You vs. Wild, a Bear Grylls survivor show intended to ask viewers "Could YOU survive in the wilderness?" but it seemed to be interpreted as "How many ways can YOU kill Bear Grylls?" Viewers could force Bear to jump across ice chasms, confront a crocodile, and, in one frankly irresistible choice, eat animal droppings. It was a fun way to while away an afternoon, but it wasn't the future of television.

That's what makes Kimmy vs. the Reverend so interesting. While the interactive feature didn't quite gel with drama and reality, perhaps the absurdity of multiple choices and storylines will lend itself naturally to comedy and provide another tool for other Netflix original comedy series. It's a grand experiment, but using Kimmy Schmidt pushes the odds a little in Netflix's favor. As one of their oldest and most loved original comedies, viewers are more likely to go into an interactive special with an open mind and replay and rewatch if only to get more time with their favorite ex-cultist.

Kimmy vs. the Reverend premieres on Netflix Tuesday, May 12.