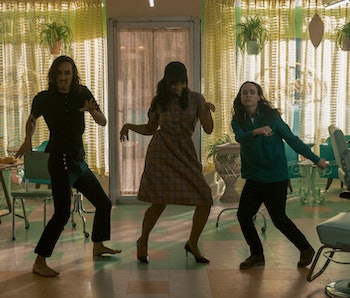 The Umbrella Academy has incorporated time travel since Season 1, with Five teleporting himself into an apocalyptic future before joining the Commission, an agency tasked with maintaining the timeline. While Five is essentially a grown man stuck inside his 13-year-old body, the years he spent in the future mean that he's now older than the rest of the Hargreeves siblings. A Season 2 Easter egg reveals an expected side-effect of time travel and it’s possible it may reshape the sibling dynamics in The Umbrella Academy Season 3.

Spoilers ahead for The Umbrella Academy Season 2.

In Season 2, Five transports himself and the rest of the Umbrella Academy to the 1960s. However, they all touch down at different points in time — Klaus and Ben in 1960, Allison in 1961, Luther in 1962, and Diego, Vanya, and Five in September, October, and November 1963, respectively.

With the variations on the time spent in the 1960s, reddit user Ms_Anxiety points out that the remaining Hargreeves are no longer the same age, despite the fact that they share a birthday. With Five being the obvious exception (he’s in his late 50s now), Klaus is now the oldest — three years in the 60s, plus the year he served in Vietnam in Season 1 — followed by Allison, Luther, and Diego. Vanya maintains her status as “Number Seven,” but is now officially younger than the rest in years.

Five’s time spent living in the future and with the Commission have informed (and changed) his outlook on life. He’s no longer the impulsive 13-year-old who time-jumped away to prove something to his father. In Season 2, Five had a thoughtful, nuanced conversation with Reginald. It’s one something definitely wouldn’t have been able to do as a teenager.

While the years the Umbrella Academy lived in the 1960s aren’t as substantive as Five’s additional 45 years, they might reshape the way the siblings function as a unit in Season 3. After all, we saw how their individual experiences in the 60s have developed them as people. Diego became a bit more hopeful and less angry; Luther was more understanding and forgiving; Allison was able to be honest about her powers without shame; Vanya was far more peaceful; and Klaus was no longer relying on alcohol to get him through the days.

It’s possible Season 3 will bring their age differences to the forefront with regards to how they’ll tackle the issue of an alternate timeline together. A year older is a year wiser, right? Perhaps Allison will have some pertinent information regarding the years spent in the 60s that will come into play in Season 3, or Klaus’ time with his cult will factor into this new Sparrow Academy. Whatever the case, the Umbrella Academy’s ages will perhaps allow for a new dynamic to evolve, one that doesn’t rely on the number labels Reginald gave them as children.

The Umbrella Academy Season 2 is streaming on Netflix.

More like this
Entertainment
5.1.2022 11:30 AM
Netflix May 2022: 9 mind-blowing sci-fi shows and movies you can't miss
By Dais Johnston
Entertainment
5.9.2022 5:54 PM
Mike Myers unravels his “silly” multiverse in Netflix’s Pentaverate
By Mónica Marie Zorrilla
Entertainment
5.13.2022 11:30 AM
You need to watch the most thrilling South Korean time-travel movie on Netflix ASAP
By Nam Cheah
Related Tags
Share: