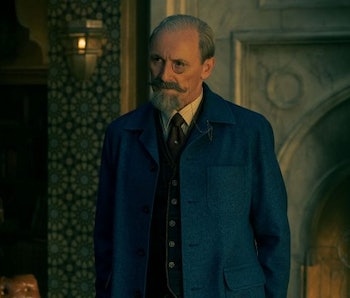 The Umbrella Academy Season 2 was chock full of twists, turns, new characters, and unresolved mysteries. While the Hargreeves siblings are preoccupied with stopping another apocalypse, Sir Reginald Hargreeves is revealed to be working alongside the Majestic 12, a secret society made up of very powerful men.

However, the Majestic 12 isn’t exclusive to The Umbrella Academy. It's actually inspired by a real-life organization awash in conspiracy.

Major spoilers ahead for The Umbrella Academy Season 2.

The Majestic 12 are first introduced in Umbrella Academy Season 2 Episode 4. When Diego and Five realize their father may have played a role in the assassination of JKF, they follow him to a fancy party to find out what he’s up to. It’s ultimately revealed that he's working with the Majestic 12, a secret organization made up of scientists, military, and government officials.

In real life, the Majestic 12 (aka MJ-12 or MAJIC) is the name of a supposed top-secret research development and intelligence organization believed to have been formed under the leadership of President Harry S. Truman. According to UFO theorists, the committee was created to investigate and subsequently cover up the infamous Roswell UFO sighting in 1947 — it’s not a coincidence that Sissy and Harlan are passing through New Mexico in The Umbrella Academy’s Season 2 finale.

However, it wasn’t UFO conspiracy theorist William Moore got a hold of the supposedly classified documents in 1984 that the Majestic 12 truly came into the limelight. Despite the documents being debunked, the Majestic 12’s supposed existence has been central to alien conspiracies for decades. Of course, the FBI has since made it clear that these documents and the secret society itself are completely “bogus.” Even some known conspiracy theorists are convinced that the documents are nothing more than a hoax.

Regardless, the group became famous enough that even renowned astronomer Carl Sagan gave them (and the documents) a mention in his book, The Demon Haunted World: Science As A Candle In The Dark. The concept of MJ-12 has also appeared in The X-Files and History Channel’s Ancient Aliens. Meanwhile, the short-lived 1990s series Dark Skies, which was all about UFO conspiracies, suggested that an alien race called the Hive was behind JFK’s assassination, with the lead characters having to stay one step ahead of the Majestic 12 while uncovering alien plots.

In The Umbrella Academy, the organization’s members were, in fact, involved in JFK’s assassination which, according to Reginald, wasn’t part of the plan and resulted in him killing the remaining 11 members. The incident is what led to the revelation that Reginald himself is an alien (which explains his obsession with the moon in Season 1). So, at least within the framework of the show, the Majestic 12 was onto something.

Whether Reginald carried on with this secret society and recruited new members is unclear, but there’s hope that Season 3 will provide some clarity about the elusive group and what Mr. Hargreeves is really up to.

The Umbrella Academy Season 2 is currently streaming on Netflix.