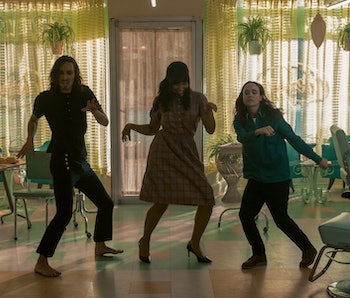 The Hargreeves made a mess of the timeline at the end of The Umbrella Academy Season 2, and fans have been waiting to find out what comes next for the superpowered siblings ever since. Netflix hasn’t officially renewed the series for Season 3 yet, but the streamer has often greenlighted its successful shows behind the scenes ahead of a public announcement. A new production leak suggests that's what's currently going on with the The Umbrella Academy, and that the Hargreeves will be back in new episodes soon.

Spoilers ahead for The Umbrella Academy Season 2.

In this instance, however, the working title doesn't seem to have any obvious connection to the show's plot. In the entertainment industry, chroma keying is a visual effects technique that layers one image with another — crucially, the technique is used when CGI and green screen are being employed.

Working title aside, the Season 3 production leak is great news, especially considering how many shows Netflix has already cancelled this year (RIP Altered Carbon and I Am Not Okay With This). That said, The Umbrella Academy has been a big hit for Netflix, landing in its top ten most-watched list and garnering over 3 billion overall minutes of viewership in the first week following the release of Season 2.

Netflix renewed the show for Season 2 in April 2019, two months after the first season debuted and a month ahead of the second season’s production start date. Of course, the ongoing pandemic is likely to blame for the delayed renewal confirmation. However, if we’re to follow the show’s history, then it’s possible that Netflix won’t officially announce The Umbrella Academy Season 3 until January, a month ahead of the series’ return to filming.

Season 2 ended on a massive cliffhanger that saw the Hargreeves siblings returning to the present day after living for a while in the 1960s. While they expected things to still be the same as they left them despite having meddled with time, they were shocked to discover that the Umbrella Academy had been replaced by the Sparrow Academy, a new group of kids Reginald Hargreeves seemingly adopted.

Fans have speculated that the Umbrella Academy’s interactions with their adoptive father in the 60s — as well as the departure of Grace, Reginald’s girlfriend and the real-life inspiration for the Hargreeves’ AI mom — is what ultimately led to their erasure in the present. It’s possible that Reginald, who didn’t even want children, saw what a mess they’d created and changed gears shortly after meeting with them.

If the Sparrow Academy wasn’t enough of a twist, the formerly deceased Ben is revealed to be alive in the alternate timeline, effectively changing his entire dynamic with his original siblings. At least the Hargreeves managed to thwart the apocalypse a second time!

The Umbrella Academy Season 3 will more than likely explore all of these storylines. The only thing we need right now is an official confirmation from Netflix, but the production leak might be enough to tide fans over in the meantime.

The Umbrella Academy Season 2 is streaming on Netflix.