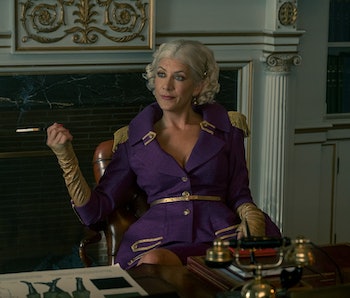 The Commission has played a crucial role in the first two seasons of The Umbrella Academy. The Handler, the Commission’s scheming head honcho, claims that the agency’s goal is to ultimately maintain the timeline at all costs. That includes assassinating major public figures and others throughout history and — at least in 2019 — preserving the apocalyptic catastrophe caused by Vanya. How the Commission got started is still a mystery, but an interesting new theory may reveal a much more sinister plot.

Spoilers for Season 2 of The Umbrella Academy.

A big chunk of Season 1 was focused on the Commission preventing Five from stopping the apocalypse altogether. The Handler even sent Hazel and Cha-Cha after him to ensure the — and the apocalypse —remained intact. In Season 2, the Hargreeves’ trip back to the 1960s changed the course of the timeline for good.

When they returned to the present day, it was to an alternate version that saw the Sparrow Academy as their replacement. With the Handler dead and the apocalypse thwarted once more, The Umbrella Academy Season 3 could reveal that the Commission had ulterior motives for wanting the apocalypse to happen beyond the excuse of maintaining the timeline.

Reddit user Tidemand suggests that the Commission wanted the world destroyed so that they could start over by selectively reintroducing species in a world free of humanity’s previous mistakes. With no wars or pollution, the Commission would basically serve as an artist painting on a blank canvas, shaping the world as the agency saw fit. It’s deeply troubling to think about.

If the Commission is indeed plotting to rebuild in a post-apocalyptic world, it’s possible that they discovered the cataclysmic event in 1955 and time-traveled to the future to stay out of the past timeline. That would certainly explain the unchanging aesthetic of the costumes and building. Perhaps the Commission even hired assassins to take out figures all to ensure the apocalypse happened. Its employees did seem very preoccupied with the event.

The Inverse Analysis — The Commission’s plans for the timeline are no secret, so it would be a massive twist if this theory proves correct. The only information we have about the Commission comes straight from its top brass, so it’s safe to assume that certain information has been omitted. That said, it’s possible its employees weren’t lying about their goals to maintain the original timeline at all. Prior to Five’s meddling, Vanya would have destroyed the world anyway. Since the apocalypse is actually a part of the original timeline, the Commission’s bottom line remains, while the theory adds a sinister meaning to their goals.

The Umbrella Academy Season 2 is currently streaming on Netflix.