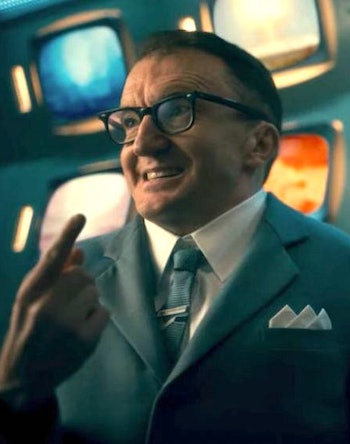 Ken Hall had a tough time with that meme-worthy secret handshake between Herb and Diego.

The actor and comedian, who plays Herb and provides the motion capture for Pogo on Netflix's hit series The Umbrella Academy, tells Inverse it took an entire day to learn. "I kept messing it up — thankfully the final cut looks great," Hall says. "I love the fact that [Herb] and [Diego] have this kind of bro-ish relationship now."

Hall hasn't yet heard any official word about a possible Season 3 renewal of the Netflix series, but it seems all but inevitable given the show's popularity. The Season 2 finale found Herb assuming temporary leadership of the space-time regulation authority known as the Commission.

"I can see him maybe enjoying the comforts of having a bigger office, y'know, indulging in a bit of that power," he says of Herb in a possible third season of The Umbrella Academy. "'I'm also curious, like, what does he do with his time off? I want to see his personal story. Does he have a bowling team that he plays with on Tuesday nights?"

When he's not performing in one of the biggest shows on the planet, he's one-half of the improv duo 2-MAN NO-SHOW alongside partner Isaac Kessler. Hall spoke with Inverse about his high school days, his fond memories of Jeff the Grey, and favorite comedy icons growing up.

I was a very insecure, scared, fearful, anxious, worried, lonely kid. That was a big chunk of my life up until maybe I was about 30 or so, when I started to make some changes in my life. I quit drinking, started really working for the first time.

For a big part of my teens and throughout my life, music has always been where I found comfort and community identity. I was really big into punk in my teens and 20s. I played drums in a punk band for about six years. That was a community of people that kind of embraced me.

When I was growing up, I never felt like fit in. I look different. I'm 4' 7" and three-quarters, major scoliosis, so I don't fit in. I know it's hard to feel excluded or alone or bullied — all that kind of stuff. So when I discovered punk, it just hit me on such a cellular level.

My favorite band was a Scottish punk band called The Exploited. I think I heard them for the first time when I was maybe 12, or 13. Their album, Let's Start a War, I put it on and after just the first few bars I'm like, "Oh, this is it."

I remember when I was, gosh, probably six or seven, seeing the Sex Pistols on TV. And I was like, why are they acting like animals? It was so exciting. I love the energy of punk. It's different, how I perform on stage, but there is a similarity in the sense of the commitment to the energy. We love absurdity and playing games and including our audience, and we really go for it.

I remember going shopping in these head shops in downtown Toronto back in the day. They were pretty seedy. My grandmother was the best, so sometimes she would come along on these shopping excursions, or sometimes I would go with my brother. I just found that such an exciting world to step into.

I can't remember what I saw, but I remember the sound of the dial-up as you were getting connected. There was this excitement and anticipation of checking out this new technology, which by today's standards is completely laughable because it's so slow. And it looks terrible, but even so, everyone was like "Oh my God, this is groundbreaking."

The Exploited was probably my first search. I can't remember.

I had crushes and such, but I wasn't in any relationship for a very long time. I had never felt like that was a thing that could happen for me. Those are years where I started drinking and doing drugs, focusing on just surviving and looking to fit in.

In hindsight, I wonder what would have happened if I actually told the girls I liked that I liked them. It would be cool to turn back time and have the knowledge that I have now, the comfort I have in my own skin. I was trying to escape a lot of real pain that had gotten buried and kind of exponentially was getting buried — you're just sort of anesthetizing the loneliness, the disconnection, not really feeling like you fit in in the world.

I wasn't a big academically-minded student back in the day. I got more of my learning outside.

But I really liked teachers that had a sense of humor, and there's two teachers that came to mind. One was a science teacher named Mr. Fisher, who really didn't have a filter. I found that quite exciting because it made him seem like a real person. My art teacher was also a real jokester.

Comedy was huge for me, and something I really appreciated. I grew up watching a lot of British comedy and Robin Williams. I love physical comedy, like John Ritter from Three's Company and Mr. Bean.

Becoming a series regular on People of Earth as Jeff the Gray. For me, that was gigantic. I'd been doing TV for probably six or seven years. Landing that was such a massive game-changer, because I had opportunities to work with, like Greg Daniels to credit the office and in King of the Hill, Wyatt Cenac, Ana Gasteyer, Oscar Nunez — a ton of amazing improv, sketch, stand-up comedians. I got to go on Conan O'Brien for San Diego Comic-Con, which was just delightful. Got to meet a whole ton of fans and stuff. For me, that was massive.

Now I teach at Second City in Toronto, but before that I was a student for 10 years auditioning to be part of the main stage companies, touring companies, and the boat cruise. And I failed every year for 10 years. Hard.

Finally, I realized, you just want me to be me. You want to hear my point of view? I think I can do that. And everything just kind of fell into place. But that 10 years was kind of hard because a bad audition sticks to you like a film. It makes you feel like you've gotta take a shower.

But it's so healthy and so good for you to fail, and to fail publicly, in front of other people and to survive and to be okay. It takes so much of the pressure off. So yeah, those failures hurt, but I think there's a lot of good learning within there.

So 10 years from now, I hope there's a vaccine!

A big thing I'm trying to work on in my life is having compassion and kindness for myself. It's been a really hard time for the world in so many ways. So many people have been affected. But I think there's there's a lot of potential for some really good healing from that.

To be honest, I think it would be quite a surprise. I wish I could have the opportunity to go back and be like, "Hey, I know things don't feel so great right now, but trust me, they get better."

When I was younger, I thought change was a bad thing. Like, when you change, you sell out. But that was the thing I discovered with improv: you can be open to possibilities and have no expectations about where it's going to go.

I'd also tell my 15-year old self to take an improv class. We don't need to do the whole twenties thing, just jump right to the good stuff.