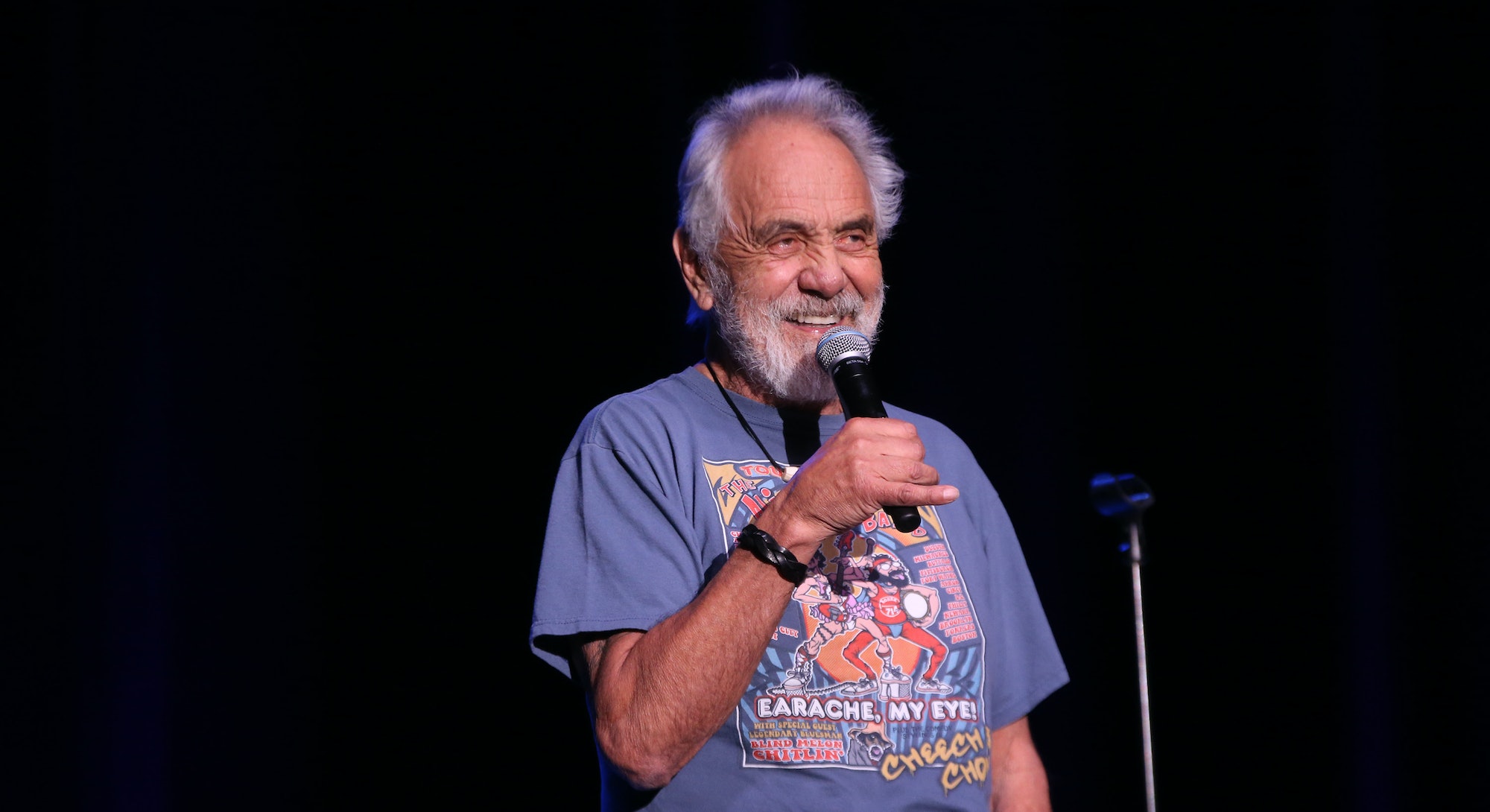 Ever since Cheech and Chong went their separate ways in 1985, Tommy Chong’s made a career out of cameos. He’s the friendly old stoner who shows up in your favorite movie or TV show to offer the main character some advice (or a joint). He’s the jolly 81-year old turning up on reality shows like The Masked Singer and Dancing With the Stars. He endorsed Bernie Sanders in 2016! But in Richard Stanley’s trippy new movie, Color Out of Space, Chong tries something new: horror.

Based on a short story by H.P. Lovecraft, Color Out of Space follows a family whose farm is invaded by a mysterious extraterrestrial parasite mostly portrayed as a bright neon pink light (and sometimes as something much scarier). Nicolas Cage plays the patriarch who slowly loses his mind as this alien bends the laws of nature, space, and time. Chong plays a hermit living on their property in what he tells Inverse is the role he’s always wanted.

“I don't mind being a hermit because that's basically what I am anyways,” Chong says. “Might as well make some money doing it.”

While not a huge horror fan, the actor, writer, director, musician, cannabis rights activist and comedian enjoyed his time on the set of Color Out of Space and says he’s game for another scary movie if the script and director are right. In an interview with Movieweb, he also said he’s working on the script for a Cheech and Chong horror movie.

That didn’t come up in my conversation with Chong, but we did discuss the state of stoner comedy, why he hated being on The Masked Singer, and his favorite comic book movie: the Oscar-nominated supervillain origin story, Joker.

“I loved Joker,” Chong says. “I loved that movie. Because even though it's not about an actual superhero, it was the most humane, a great message movie about gun violence, about mental illness, about all those great things — and comedy. To me, it just peeled back a layer of society that needs to be looked at.”

So I watched Color Out of Space last night. It's pretty freaky, and I thought you were great in it. You haven’t done much horror before, though. How did the experience compare to other roles you’ve played?

Oh, it was really, really a lot of fun. I really enjoyed it, mainly because I didn't have to do that much. Usually, with films, they've got, you're running around, or you've got yourself running around, but this was quite comfortable. I don't mind being a hermit because that's basically what I am anyways. Might as well make some money doing it.

Without going into spoilers, the last scene you’re in is really bizarre. What did you do to prepare for that?

Not a whole lot. I had Richard Stanley, the director, he kind of hovered around me. Because of my age, I don't retain a whole lot of dialogue, you know? And so he just coached me through the whole process. You've just got a guy with a vision and apparently it worked out pretty good.

“When you do things for the right reasons, then you end up with a good product.”

What was it like working with Richard Stanley. He’s made some pretty wild movies. Are you a fan of his earlier movies like Hardware?

Well, I never really knew his work. I was so busy doing my own stuff that I never had a chance to get into that genre. But when I did and I saw his body of work, and then when I met him, what a sweet man. He's another copy of myself. The thing about movie directors is, we're a very curious bunch. We love to see what makes things work, and that's what Richard and I have in common. He knew my work and I knew a bit of his work and it was a meeting of the minds. He's doing it for all the right reasons and now I'm doing it for all the right reasons. And when you do things for the right reasons, then you end up with a good product.

It sounds like it was a good experience, so are you interested in doing more horror movies in the future?

It depends on the director and the story. If the story holds up and you've got the right director, man, it's a no brainer. That to me is more important than how much and where. That's the way I look at everything. All my life, that's the creed I follow. I don't do anything for money, but I'll do everything I can for the project.

A big part of your image is your connection with marijuana and the stoner comedy, which I love, but obviously, the way the public thinks about weed has changed a lot in recent years, especially in America. So I'm curious, do you think the fact that Americans are becoming more accepting of weed has an impact on the type of comedy you've done and the relevance of stoner comedy in general?

Oh, absolutely. We freed a lot of minds. There were so many stereotypes. It's coming to light now, but very few people realize how much of a racist law the marijuana laws were, and still are. Because if you think about it, you're taking a medicine that's been proven for thousands of years. If you read the Chinese literature or the Indian literature, they used cannabis for thousands and thousands of years because they knew the medical side of it. And then you take a racist country like America looking for a law to replace prohibition.

Prohibition was the first racist law, and when that failed then they had to come up with another one. And who better to attack than Mexicans — like Donald Trump's doing now — and demonize marijuana? Up until then, it was called hemp or cannabis, and now it's evil marijuana, you know, reefer madness. So being a part of people that the racist law was intended to be against, all I've really done is just been there when they find out how wrong they were, and how right we were.

So with the popularity of CBD and marijuana becoming a luxury item, do you think there’s still room for stoner comedy in the year 2020?

Well, the thing is, marijuana or any kind of substance abuse is what we call a trigger in the movies. If you want to show society, you pick whatever's popular at the time. That's why Red Skelton would do these booze jokes. His whole act was about being drunk. W.C. Fields had the same kind of thing, and Bob Hope and Bing Crosby. We just updated it from booze to weed. So now you've got Cheech and Chong running around, smoking too much and getting into all sorts of mischief. It was just a sign of the times.

Now they're trying to do a lot of TV and jump on that bandwagon. Cameron Crowe had one called Roadies and then Chuck Lorre came up with a dispensary comedy and they all failed because they're using the old alcohol kind of program where you do something naughty, and that's not the way it is anymore. Up in Smoke is very dated now, no matter what you say. Even though it was 40 years ago, that's the way it was back then. That's not the way it is now.

So what comes next? What do you think is after stoner comedy?

Well, Color Out of Space is a good example. Now we're going to pull the extraterrestrial into the conversation, which is not a bad idea. I think that might be a little indication of what's to come.

You were recently on the reality show The Masked Singer. What was that like?

It was actually quite horrible because, well, we're famous, but we have to wear a mask. No one knows who we are. So you spend all this time being like Hannibal Lecter, you know, in isolation, and then you're only brought out to sing a song and you can't talk to anybody. Oh my God. You know, being part of that, they don't who you are, and everything had to be done in secret. I'm used to having my adoring fans around taking pictures, but when I did the mask thing all I like to do is try to learn the song and then try to sing it with a mask on. But other than that, you know, as far as being a part of a popular show, that was a big thrill.

Ok, one more random question. I’m curious if you’re a fan of superhero movies. Do you like Marvel or DC movies?

Well, I love comics and to me, the greatest movie, and I'm not exaggerating, I think the greatest movie that I've seen recently is a comic book movie. It was called Joker. I loved Joker. I loved that movie. Because even though it's not about an actual superhero, it was the most humane, a great message movie about gun violence, about mental illness, about all those great things — and comedy. To me, it just peeled back a layer of society that needs to be looked at.

And as far as the other superhero movies go: everything passes, nothing stays forever, especially superheroes. You Superman and Batman, for a while there they were the hottest things around, and now there are other heroes. and there's going to be others after that.

So true. Well, thanks for your time, Tommy, and again, I thought you were really great in Color Out of Space. I hope you do more horror.

I hope so too.

Color Out of Space is in theaters now.