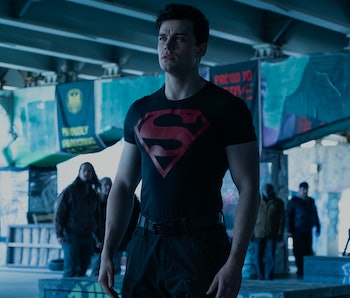 Will Superman ever fly into the Titans universe? One star of the DC Comics television series on HBO Max isn’t just hopeful to see it — he has a general idea of how it could happen.

At New York Comic Con, Titans star Joshua Orpin previewed the upcoming fourth season of the HBO Max series to the press during a pre-panel roundtable interview. The actor described Season 4 as “bigger and better than ever before” and a personal favorite.

“It's personally my favorite season of all the seasons we've done,” Orpin said to members of the press, including Inverse. “I'm a little biased because Connor is somewhat front and center this season.”

Orpin adds Titans is, at its core, an ensemble show where “everyone gets their moment in the sun.”

“There's no kind of elevation of one character at the expense of any of the others,” Orpin says. “We see everybody come together as a team. we see all the individual character arcs and it all comes together beautifully.”

Still, Orpin teases that Season 4 has a special emphasis on Conner Kent, a genetic clone of both Superman and longtime villain Lex Luthor.

“We’re going back and picking up story threads and ideas we kind of introduced back in Season 2, when Conner first arrived,” Orpin says. “We’re delving deeper into those than ever before.”

Previews of Titans Season 4 have thus far emphasized the villain Brother Blood, played by Joseph Morgan, a cult leader who commands an order of ninjas. Brother Blood is set to stand in the Titans’ way when they return to San Francisco.

But while Brother Blood is taking up most of the attention for Titans Season 4, he’s not the only bad guy making his mark. It was in September when it broke that Titus Welliver (Bosch) had joined Titans Season 4 in the role of Lex Luthor. Welliver joins a long history of live-action Lex actors, including Gene Hackman, John Shea, Michael Rosenbaum, Jesse Eisenberg, and Jon Cryer.

“We've got Lex Luthor this season. Goes without saying, that's pretty significant for Connor,” Orpin observes. He then adds, somewhat cryptically, “All those things we've kind of talked about [in Titans] thus far, now we're going to see — if you know what I mean by that. About the duality of Connor. The Lex side and the Superman side. We're gonna get to see those realized this season.”

When asked point blank if there’s a possibility for Superman in Titans, Orpin says that it would be a Superman who fits the Titans canon rather than a crossover with either Henry Cavill or Tyler Hoechlin, who currently stars in The CW’s Superman & Lois.

“I think, if we ever did introduce Superman to our show, it would be our own version,” Orpin says. “It would be a new version. The Titans version. It would be cool to cross over with one of the versions that exist. But I think one of the things that Titans does so well is that it reinterprets characters in a way that they come into the world of the show, and they totally fit what we're doing.”

A few major DC figures have appeared in Titans already. Game of Thrones alum Iain Glen played Bruce Wayne (importantly, he never dressed up as Batman) in several episodes of the second and third seasons. Also in Season 2, Esai Morales (soon to star in the next two Mission: Impossible sequels) played Slade Wilson (aka, Deathstroke) a prominent anti-hero and villain in the DCU.

Orpin brings up the imminent arrival of Lex Luthor as yet another example of Titans reinventing known characters. “The Lex Luthor we're bringing to this season of Titans is maybe not one that we've seen in live-action before,” Orpin says. “Personally, as a fan, this made me excited. This is a guy that brings a lot of gravitas. This is like the comic book Lex Luthor. This isn’t to say the other versions aren't great, because they are. But this isn't campy or comedic or a larger-than-life villain.”

He adds, “This is a guy who's ambitious, ruthless. He’s the smartest guy in the room. He’s 20 steps ahead of everybody else. He's terrifying. And that's a version that we haven't really seen yet, I don't think, in live-action. I'm really excited for people to get to see that.”

While Lex Luthor is bound for Titans, the possibility of Superman still feels like a hope and a dream. But with Conner Kent around and evolving into his own superhero, “Superboy” is going to need someone to remind him of his Kryptonian roots. Maybe one day the Titans universe will find room to fit in one of DC’s biggest icons.