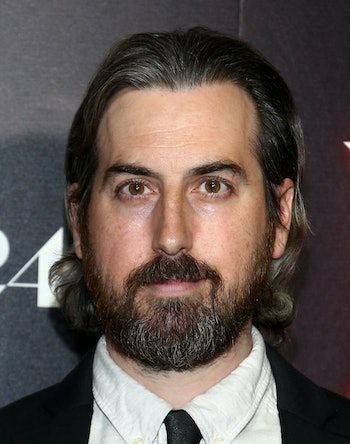 Ti West knows how to keep a secret.

There’s a good chance you went into X, his return to horror movie directing, without realizing that one of the stars plays two roles in the A24 slasher. (Spoiler alert: Mia Goth plays both a young porn-star and a murderous old woman, making that one scene with the two of them in bed even more disturbing.) And at the movie’s premiere, West revealed that he’s already filmed a prequel called Pearl, which stars Goth as a younger version of X’s wrinkled villain. There are plans for a sequel too, but we know even less about that. However, one thing is clear: there’s no way to predict what West is planning next.

“Whatever people might expect Pearl to be they are almost certainly wrong,” he tells Inverse.

West has compared the prequel to Mary Poppins, but when I ask if it might be a horror musical, he demurs. “It is a much more grandiose, different type of experience.”

X stars Mia Goth, Brittany Snow, Jenna Ortega, Scott Mescudi, Owen Campbell, and Martin Henderson as a group of young filmmakers in 1979 who run into trouble with their elderly hosts while shooting on their property. It also marks the return of West, who broke into indie horror scene with The House of the Devil (2009) and followed it up with The Innkeepers (2011) and The Sacrament (2013) before taking a detour into television.

While X certainly stays true to the slasher format, it’s another essential entry from A24, the studio that helped define modern horror through The Witch (2015), The Blackcoat’s Daughter (2015), Hereditary (2018), and Saint Maud (2019).

Speaking to Inverse, West talks about his return to feature filmmaking, his directorial choices in X, and what lies ahead for the film’s closely guarded prequel, Pearl.

Inverse: I loved X! I’ve been a fan of your work for a long time. I saw House of the Devil in college and it blew me away. I’ve been following your career since, so it’s been awesome to see you return with this one.

Ti West: Thank you! I appreciate that.

You’ve been working in the television space for a while so I’m curious about what you learned in there that might have influenced your approach to X.

I spent about five years doing episodes of television and I was figuring eventually I’d just make another movie, but I started thinking: Why would I do that? I was enjoying doing television.

So I started to think about what I liked about movies in general. The short answer is: I like the cinema of it all, the craft. If I was going to come back and make another movie, it would be very craft-focused, hence the movie about moviemaking.

The big takeaways from doing TV are just the sheer number of reps on set from doing like 17 episodes of TV in such a short period of time. If you’re a very successful director, best case scenario you’re directing one movie a year. That’s not that long to be directing. No other job is one where you only do it for a couple of weeks once a year. Doing television, I did like six a year. I was going from one set to another and you just get sharper from the number of reps and all the diverse people and equipment and stories. You just get better at it.

The horror genre has been particularly interesting in recent years. What excited you in terms of coming back to horror cinema? Your previous film was a Western so I wasn’t sure if you were planning on shifting genres or if horror is where your heart is.

I had never made a slasher movie, which was exciting. I don’t want to repeat myself because making movies is a huge endeavor. It’s two years. It’s very traumatic and it totally uproots your whole life. You have to really want to be doing it in a profound way.

I was fortunate to make so many horror movies in a row. Whatever itch I was trying to scratch was scratched. Could I make a jump scare and make the whole audience react? The answer was yes. Could I make something suspenseful? I felt like I could. Doing those things again isn’t necessarily appealing.

But I had never made a slasher movie. And I was thinking about craft, practical effects, makeup effects, and performance through that. So it just seemed like it was the right time. I never really thought of it as a return to horror.

You’ve talked a little bit about the prequel to X, Pearl, that’s already been shot, and a potential sequel. Assuming you’re not going to go the slasher route again, what else are you kind of looking to explore within the horror genre with those?

Yeah, I don’t have a desire to repeat myself, so Pearl for instance is not like X. The movies enrich each other in a really cool way. I made X knowing I was gonna make Pearl. There’s a lot of connective tissue between the two. And there’s obviously a related character. But whatever people might expect Pearl to be they are almost certainly wrong about what it is.

“Whatever people might expect Pearl to be they are almost certainly wrong.”

In modern horror, there’s sometimes a reluctance to be transgressive or salacious. X brings that back, but a lot of people have gotten comfortable with A24 being a certain type of horror. I don’t like to use the word elevated horror, but people attribute that to A24. Did you see yourself breaking the mold or the conventions of what we associate with modern horror by going back to some of the more exploitative elements of the genre?

No, I didn’t think much of it.

I wrote this movie because it was the sensible movie for me to make. And I went to A24 because I think they are making the best movies from a studio standpoint and they’re very respectful filmmakers.

I don’t necessarily know what elevated horror is. I kinda know, but I’m not entirely sure. I didn’t really think about what anyone else is making either as far as other contemporary filmmakers. You're so overwhelmed trying to pull your own thing off you don’t have a lot of time to think about anything else.

One of the things I’ve always appreciated about your films is the use of music and soundtrack. You mentioned Douglas Sirk and Mary Poppins influencing Pearl. I’m curious if you’ve ever considered doing a horror musical — or is that an element of Pearl?

Umm… I will say that the music in Pearl is once again from Tyler Bates, who did a completely different thing. And again, because I’m trying to be so cagey about any info, I’ll say it is a much more grandiose, different type of experience. So, as you suggest that music being important, I think you will feel the same when you see Pearl. The music is very much on display in a big way.

“It is a much more grandiose, different type of experience.”

Any word on the release date for Pearl yet? I have to ask.

[Laughs]. We kept the existence of the movie a secret for so long that now that everyone knows about it, I’m going to do my best to keep everything else about it secret. It won’t be a secret for that long. But in 2022, to keep anything secret is a miracle, so I’d like to hold as much information as possible.

Part of what’s been so fun about X is people not knowing what they’re going into, even down to the Mia Goth of it all. It’s a movie that benefits from not knowing a lot about it. Pearl’s no different. The less people know, the better!

X is currently playing in theaters.