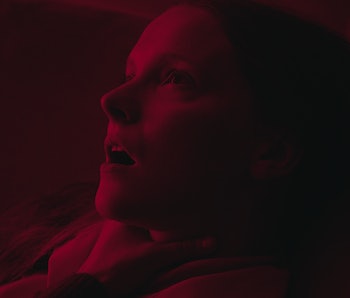 I saw Saint Maud a full month ago and I still can't get it out of my head. The A24 horror movie from first-time director Rose Glass premiered last September at the Toronto International Film Festival and officially releases in April. So you might be tempted to check out the terrifying new trailer that hit YouTube this week, but I'm begging you not to for one very good reason.

Saint Maud is the kind of movie best experienced with as little prior information as possible. Here's all you need to know going in: A young nurse named Maud (Morfydd Clark) is hired to take care of a middle-aged dancer, Amanda (Jennifer Ehle), who's dying of cancer. The story is told from the perspective of Maud, who's a bit unstable and decides it's up to her to save Amanda's soul. The story quickly goes off the deep end from there in some unexpected and twisted ways.

That's all I'll say about Saint Maud, and that's all you should know when you see it. The movie does some incredible things, both visually and thematically, that make it one of the most powerful character studies in recent cinema (horror or otherwise).

The new Saint Maud trailer reveals several of those powerful moments, spoiling some key scenes without the necessary context. By watching it, you're missing out on a great experience in theaters.

Of course, I understand why movie trailers need to do this. The best way to get people to see a movie is to tease some of its most exciting scenes, but after Hereditary, Midsommar, and The Witch, I think A24 has proven itself as a home for terrifying indie horror.

So skip the trailer and instead save the date for Saint Maud's actual release. You can thank me later.

And if you absolutely must watch it now, here's the cleverly titled "Ash Wednesday" trailer for Saint Maud:

More like this
Entertainment
5.13.2022 1:30 PM
Christina Ricci says Yellowjackets fans will love her monstrous new thriller
By Dais Johnston
Entertainment
5.10.2022 11:15 AM
5 years ago, Happy Death Day did one revolutionary thing no time-travel movie had done before
By Will Ashton
Entertainment
5.11.2022 11:30 AM
15 years ago, 28 Weeks Later improved on Danny Boyle's zombie cult classic
By Jeff Spry
Related Tags
Share: