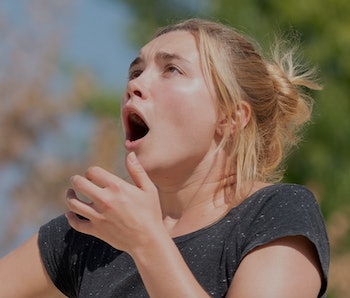 That deep, guttural gurgling sound that is nature’s way of something is wrong is like nails to our species’ instinctual chalkboard. It’s also practically its own musical cue in Ari Aster’s Midsommar. You first heard this growl in last year’s Hereditary, when Toni Colette went to a dark place to mourn her dead daughter. Now that sound is back to haunt us for yet another summer, but at least this time the view is stunning.

Blurring the lines between horror, summer thriller, and the worst break-up in movie history, Ari Aster’s newest film Midsommar is a confident, if self-indulgent masterpiece that mixes a spiked cocktail of tension, drama, intrigue, and brutal violence. It’s a thorough and stressful examination of PTSD pushed through the framework of a thriller, and it’s easily the most disturbing movie of the year that will inevitably be the most polarizing among moviegoers.

Personally, I thank the ancestors that it exists.

In theaters on July 3, Midsommar is the story of Dani (Florence Pugh), a twenty-something running on fumes with her shitty boyfriend Christian (Jack Reynor). In an effort to overcome her parents’ murders, she tags with Christian and his friends on a thesis research trip to Sweden where they embed in an isolated commune that worships very, very old gods. After hits of mushrooms, ritualistic meals, and one harrowing ceremony, the madness begins.

At a long and exhausting two hours and 20 minutes, Midsommar is, in a word, immersive. The heavy, rhythmic breathing of Dani’s panic attacks becomes our own as she finds herself falling deeper and deeper into the commune’s lifestyle. She’s so deep, she almost doesn’t notice when her friends start getting picked off one by one. Dani is a “Final Girl” unlike any other, one who adapts to her environment to not only live but thrive.

In what feels like a victory lap after Hereditary, Ari Aster takes his sweet time to lull viewers into his clutches in Midsommar. But like how the characters experience time, its passage is a vague notion. It feels more like the natural passing of seasons. As the sun sets and the scenery becomes cooler, you just know when the movie has reached its twilight. By then it’s too late to leave.

It would beinaccurate to call Midsommar a “cult” movie. There’s no one egomaniacal personality, nor echoes of Jim Jones or NXVIM. This is just a very old religion with very old ways (who, in an amusing twist, aren’t allergic to the outside world, such as in the kids watching Austin Powers). But like a cult, they’re suffocating and lax with the truth. Nor are they above murder to maintain their way of life. This is the last place someone like Dani, still struggling with PTSD, needs to be.

No spoilers here, but Midsommar is a sharp portrayal of gaslighting that informs Dani’s ending. Whether it’s the commune or her own boyfriend, Dani is never sure who to trust as she slowly loses trust in herself. This not only adds necessary drama to the conflict but intrigue over what becomes of Dani. I’m excited for more people to see Midsommar almost exclusively because I want to know what others think of Dani’s story.

Dani’s trauma is an effective narrative tool that can engulf a viewer, perhaps too effectively. Whether its Aster’s maliciously smart direction or Pugh putting on an acting clinic that would warrant a Best Lead Actress nomination in a just world, Midsommar knows how to distress an audience in ways few horror movies actually can. And it’s all so uncomfortably breathtaking.

The scenery and photography of Midsommar is utterly gorgeous, as if the cinematographers shot the film on the Windows XP desktop hill through an Instagram filter. The endless summer sun produces an atmosphere that is at once relaxing and unnerving. You might feel safe to trip balls, but that’s just when the eldritch magic of Midsommar works best: You’re left unprepared for the darkness when it creeps in.

Between Hereditary and Midsommar, Aster’s sensibilities as an auteur are crystallizing. Aster’s got a perverse taste for violence made plain. In Hereditary, a little girl’s head is hacked off by a pole and left on the side of the road to rot under sun, flies, and maggots. In Midsommar, bodies plummet to the ground, and if they survive, their heads are smashed to goo by a sledgehammer.

These are all “Rated M for Mature” levels of violence played with aggressive normalcy; smashing heads make a simple mushy sound, like hammering a bowl of spaghetti. Aster thrives in that nether-realm where bodies are mutilated to terrifying violence but the films are never gleeful like in ‘80s slashers or Takashi Miike pictures. Midsommar is perhaps the most violent movie of the year, but you can’t call it Mortal Kombat.

Like Hereditary last year, I anticipate critics will praise Midsommar while many people flat out hate it. It’s long, its characters are unlikeable, and the juxtaposition of beauty and monstrosity is distressing on a primal level. And outside Dani, it isn’t a very smart movie in regards to its world-building (good luck keeping up with the commune’s impenetrable, weird-to-be-weird mythology).

To that I say: Good. Really, Midsommar is no more than just the work of a confident director who knows exactly what he’s capable of pulling off. And in a summer packed with underwhelming blockbusters atop a post-Avengers: Endgame malaise, Midsommar is giving us the escape into madness we deserve. It’s a movie where half-dead victims gargle their blood and it’s the only time you think, yes, that’s exactly what I needed to hear.

Midsommar is in theaters July 3.