“You have to make the money to buy a ticket.” 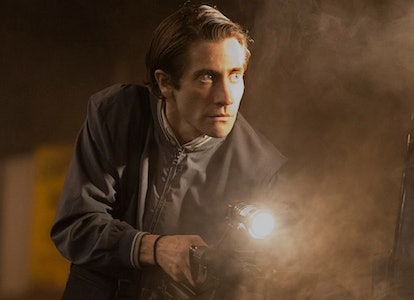 It’s a tale as old as time: A guy down on his luck finds something that could change his fortune, but over the course of the story learns about himself. Usually, this protagonist is determined to make a better life, no matter what it takes. But one 2014 movie new to HBO Max tells this story with a key difference: The hero learns the wrong lesson. It may not mean a happily ever after, but it sure makes for a great thriller.

Nightcrawler begins with a portrait of Leo Bloom (Jake Gyllenhaal). If the hustle-and-grind mindset had a mascot, it would be him. He lies, cheats, and steals, but is also ready to deliver a heart-wrenching monologue at the drop of a hat about why he deserves a job. But he can’t get one, largely because of the lying, cheating, and stealing.

Nightcrawler is streaming now on HBO Max. Here’s why you should watch it, and what you need to know before you do.

Suddenly, a job falls into his lap. He stumbles across freelance cameramen racing to capture exclusive footage of crimes and crime scenes to sell to news stations. To Leo, this is a perfect opportunity. He pawns stolen goods to get a police scanner and video camera, and sets off to make something of himself.

This isn’t just a short-term gig for Leo. He knows what it takes to be successful, and he wants to build an empire. The next tool he needs is an assistant, which he finds in a homeless man named Rick (Riz Ahmed). Rick isn’t as ambitious as Leo, but he needs the money and is willing to learn.

In Leo’s worldview, you can’t succeed by playing fairly. That means extortion, blackmail, and even tampering with evidence or withholding it from the police are all fair game. This has tragic, predictable consequences, but don’t expect Leo to change. In the high-stakes world of TV news, bad behavior is often rewarded.

Nightcrawler is a fascinating portrait of one man’s rise to success juxtaposed with his descent into callous self-interest. Leo is someone you ping-pong between empathizing with and actively rooting against, which is a tightrope screenwriting act.

This accomplishment is supported by Gyllenhaal’s wide-eyed intensity. He plays Leo Bloom with such an intense focus that by the end it’s clear he doesn’t even care about his own well-being as long as his business is successful. It pairs well with Ahmed’s naiveté as Rick, and together the two have discussions that sound like the internal monologue of someone torn between good and evil.

Just like real Los Angeles nights, the action of Nightcrawler is non-stop and morally dubious. It also carries a sharp criticism of modern news media. At what point does crime coverage become spectacle? When do newscasters become implicit? This may be a rags-to-riches story, but the rags look pretty good in comparison.

More like this
Culture
November 19, 2022
ICYMI: Spike Lee’s underrated heist movie is about to leave HBO Max
By Alex Welch
Culture
November 21, 2022
Roland Emmerich's most ridiculous movie isn't quite as funny as it used to be
By Mónica Marie Zorrilla
Culture
November 16, 2022
You need to watch the most underrated time-travel movie on HBO Max ASAP
By Dais Johnston
Related Tags
Share: