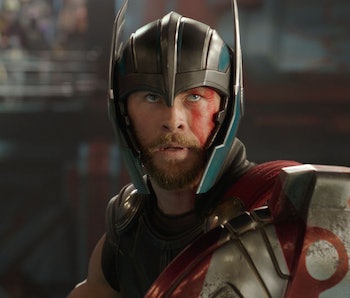 Are you not entertained? As if in response to those wondering how Taika Waititi will follow up Thor: Ragnarok, the 2022 Marvel movie Thor: Love and Thunder has just added another major Hollywood actor to join Chris Hemsworth, Natalie Portman, Tessa Thompson, and Christian Bale in the Marvel Cinematic Universe: Russell Crowe.

While Crowe’s role is yet to be revealed, speculation is wide open as the role is a “small” one that may have giant ramifications for the MCU — by way of a truly bizarre connection to Avengers: Endgame.

What Happened? — On Monday, Deadline and The Hollywood Reporter reported that Russell Crowe has joined the cast of Thor: Love and Thunder in a small, secretive role. The news was confirmed after Crowe was seen with the cast and crew of Thor on March 26, where the likes of Hemsworth, Portman, Waititi, Jeff Goldblum, and more attended an NRL (National Rugby League) game between the South Sydney Rabbitohs and the Sydney Roosters. (Crowe is famously a lifelong fan of the Rabbitohs.)

Both Deadline and Hollywood Reporter say that Crowe’s role is “a mystery” and a “fun cameo.” Deadline further reports that Crowe’s part is “one of many surprises” like Matt Damon’s cameo as an Asgardian stage actor in 2017’s Thor: Ragnarok. (Speaking of Damon, the Bourne star is also confirmed to reprise his cameo role in Love and Thunder.)

The plot for Thor: Love and Thunder is another secret Marvel is keeping close to the chest, for now. We know Thor’s ex-girlfriend Jane Foster (Natalie Portman) will return, in position as a new Thor. Jane’s ascension is inspired by writer Jason Aaron’s run on The Mighty Thor, where a cancer-stricken Jane Foster also wielded the powers of Thor.

Crowe Flies Stage Right — Though it would be rich for an actor like Russell Crowe to play a character that’s big and important in the Marvel Universe — like, say, Galactus — chances are Crowe’s role is a lot less serious, and maybe a lot more fun.

Here’s the thing: When Marvel casts a big-name actor for a big, important role, it’s always made to be a big deal. There’s always a fancy announcement or some kind of reveal at Comic-Con, like Cate Blanchett as Hela for Ragnarok or Tony Leung as the Mandarin for Shang-Chi. Marvel didn’t say anything about Crowe, and in fact wanted to keep it a secret. That heavily implies that it is just a fun, small role that Crowe had time in his schedule to participate in. So don’t get a headache figuring out if Crowe is the next big villain, because the odds are that he’s not.

With that in mind, a colleague suggested Crowe could be “Thanos” in yet another Asgardian stage play detailing Thor’s adventures that recaps Avengers: Infinity War and Avengers: Endgame, which is both extremely plausible and extremely amazing. Imagine Crowe in full Javert from Les Miserables mode, except instead of hunting down Jean Val Jean, he’s hunting down Infinity Stones. The “Stars” parody writes itself — and if you need to familiarize yourself with “Stars,” well, look no further:

Although, speaking of “Stars,” now that I think about it ... I firmly believe Crowe could be Star-Lord (someone Thor maintains a rivalry with) in an Infinity War/Endgame stage play. Maybe it’s the beard — a beard that could definitely apply more accurately to Thor’s final Endgame mode, but may not exactly fit his own self-image in his mind’s eye.

The Inverse Analysis — Regardless, the possibilities surrounding Crowe’s character are vast. The movie has a lot of ground to cover in terms of catching viewers up on Thor’s journey since Ragnarok, and Crowe could very well be one of the central vehicles to pull it off — unless the film has something even more ridiculous in mind for this all-time iconic actor.

Thor: Love and Thunder will be released in theaters on February 11, 2022.

More like this
Entertainment
Jan. 17, 2023
Guardians of the Galaxy 3's Adam Warlock reveal may be a big misdirect
By Eric Francisco
Entertainment
Jan. 26, 2023
Corey Stoll could have the chops to make a live-action M.O.D.O.K. work
By Mónica Marie Zorrilla
Entertainment
Jan. 19, 2023
Ant-Man 3 interview proves Marvel is taking the wrong lesson from Jodorowsky’s Dune
By Ryan Britt
LEARN SOMETHING NEW EVERY DAY.
Related Tags
Share: