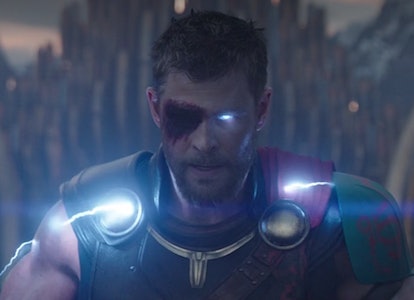 The cast of Thor: Love and Thunder continues to grow. Director Taika Waititi's highly-anticipated Thor: Ragnarok sequel started filming a few weeks ago, and all signs point towards it being yet another ambitious standalone outing from Marvel Studios.

Like its predecessor, Love and Thunder looks to feature a stacked cast of established MCU characters, including Chris Hemsworth’s Thor, Tessa Thompson’s Valkyrie, Natalie Portman’s Jane Foster, and the Guardians of the Galaxy. But new rumors indicate that they won’t be the only familiar faces making appearances in the film either.

Indeed, someone else from the Thor franchise may be making a surprise return as well — from beyond the grave, no less.

The News — This past weekend, Chris Hemsworth shared photos from an ‘80s-themed birthday party on his Instagram, and featured in the photos are none other than Idris Elba and Matt Damon.

For his part, word of Damon's return following his Ragnarok cameo has been circulating for some time now — but Elba's return? That's new. His presence in the Instagram photos suggests that he may be reprising his role as Heimdall in Love and Thunder, which should come as a bit of a surprise, considering the character was tragically killed off in Avengers: Infinity War.

Granted, it should be noted that Elba has been in Australia the past few months filming George Miller’s Three Thousand Years of Longing. That means it’s entirely possible his appearance at this party was the result of being in Australia at the same time as Hemsworth and not because the two are working on Thor: Love and Thunder together.

However, given strict Covid quarantine rules across major studio productions, it's also possible that Elba was only allowed at the party because he’s already interacting with the Thor cast and crew.

Welcome to Valhalla — It is, of course, unconfirmed right now if Heimdall will be returning in Thor: Love and Thunder, and will probably stay that way until the film’s release next year.

Nevertheless, the possibility of the character showing up in the sequel does feed further into another popular Love and Thunder theory circulating online right now. According to that theory, Hemsworth’s Thor will travel to Valhalla, reuniting with dead characters from the MCU. Elba’s Heimdall is rumored to be one of these characters.

The rumor adds Heimdall to the long list of notable MCU characters said to have some place in Thor: Love and Thunder. Recent rumors have suggested Brie Larson’s Captain Marvel could also have a cameo in the film, while some Love and Thunder set photos have led fans to speculate that the sequel will feature Jeff Goldblum reprising his Thor: Ragnarok role as Grandmaster.

The Inverse Analysis — If Thor really does venture into Valhalla in Love and Thunder, it would certainly make sense for Heimdall to appear. The two characters had a close relationship in the previous Thor films (even if Elba’s screen time was disappointingly small across all three) and it’d be great to see Elba reprising the role at least one more time. After all, it wouldn’t be the first time Marvel has found an unexpected way to bring a Thor-adjacent character back to life.