“It was a lot of suffering for craft” 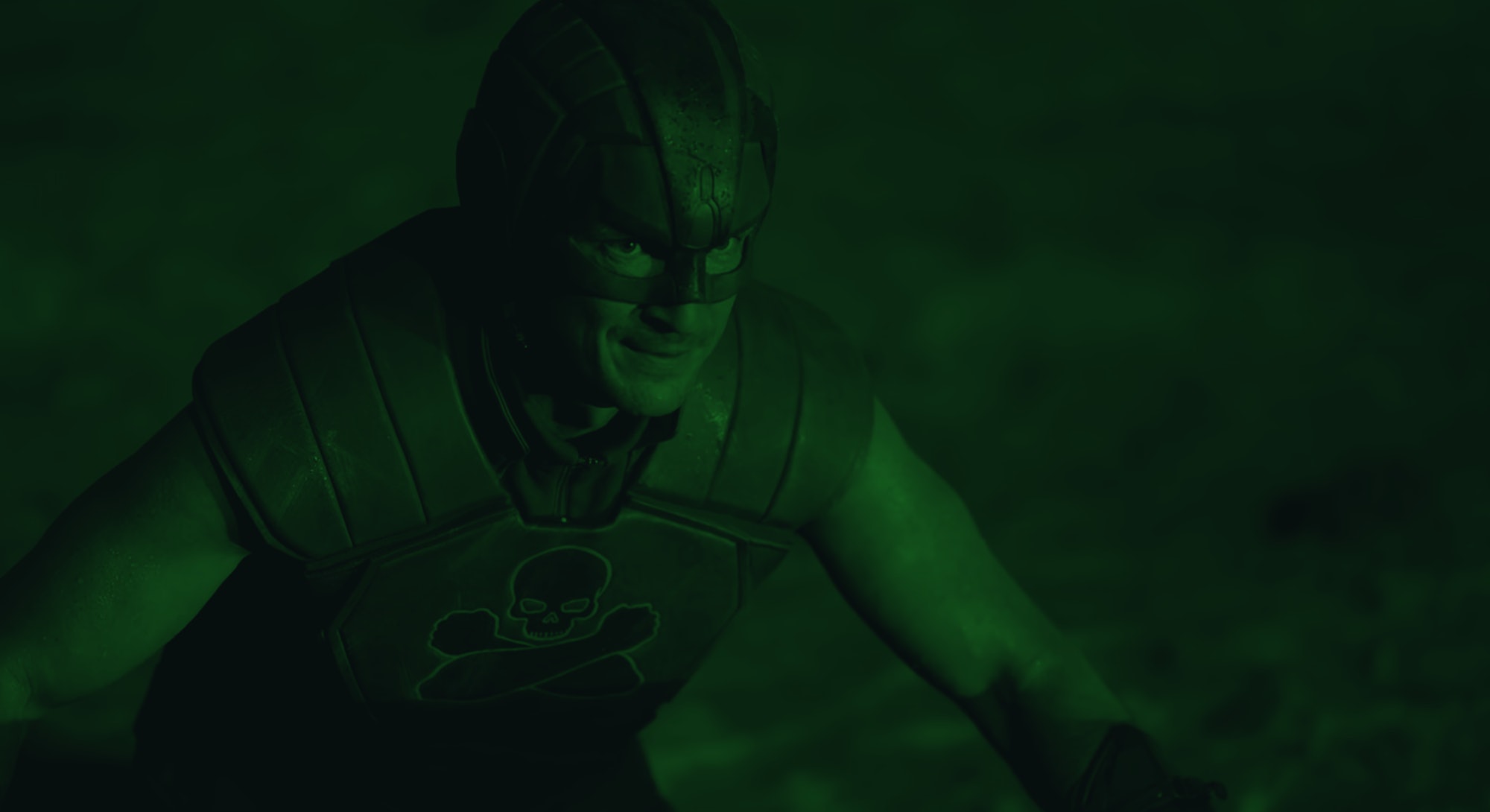 Standing on a fake beach for James Gunn’s The Suicide Squad, the actor was up to his elbows in sand, which made the bulky leather gauntlets he’d donned to play reformed villain T.D.K. (The Detachable Kid) less than comfortable.

As Fillion’s forearms sweated and stuck to the heat-trapping leather, coarse grains of sand caught between, he improvised.

“My solution was taking a pair of socks, cutting the toes off, and putting those on and the gauntlets on top,” he tells Inverse.

Fillion’s masked mercenary is an oddity even inside the stranger-makes-you-stronger world of The Suicide Squad, DC Comics’ most exuberantly balls-to-the-wall superhero blockbuster yet (and a quasi-sequel to 2016’s Suicide Squad).

As T.D.K., who has the strange ability to detach his limbs and control them from afar, Fillion commits to a tongue-in-cheek riff on Arm-Fall-Off-Boy (an honest-to-goodness comic-book character who debuted in Secret Origins #46, in 1989). As this weird hero dodges bullets along a South American shoreline, Fillion says all the sand offered him some uncomfortable realism to offset the manufactured mayhem.

“It was a lot of suffering for craft,” Fillion says. “Being sleeveless and wearing a leather chest piece that has no flex, any time you move your arm, you’re rubbing it on the edge of this leather. And when it’s skin versus leather, skin is going to lose.”

That said, Fillion’s the definition of a pro. Omnipresent on network television, the actor’s currently best-known for his lead role on ABC’s police procedural The Rookie. He previously spent eight seasons playing a novelist-turned-detective on Castle, also on ABC.

In an interview with Inverse, Fillion reveals what it’s like to work with frequent collaborator James Gunn, why he thinks T.D.K. went to jail in the first place, and — of course — that Uncharted fan film.

When you found out you were playing a character known as “Arm-Fall-Off-Boy” in the comics, what was your first reaction?

I’m not exactly playing that character. There are similarities. But it’s about trust. Whenever someone you trust calls you and says, “I want you in a project, and I want you to play this character,” you can trust it’s going to be great. I always look forward to figuring out the function of the part you play in the story. I love that process. When James Gunn gives you a function. It’s always going to be something worthy.

Where did “T.D.K.,” the name, come from? That’s not from the comics to my knowledge.

I’m a little embarrassed. I thought it stood for “The Dark Knight.” So, one of us is in for disappointment. I hope it’s not me.

What do you think got T.D.K. serving jail time in the first place?

Clearly, robbery of some sort. He has an ability that made him think stealing would be easy. Problem is: T.D.K. is not entirely bright. I think his weakness is his overconfidence. He thinks he’s the cat’s pajamas. He thinks he is superhuman. He’s not. He’s, at best, above average.

You mentioned building trust with James Gunn. What shorthand have you developed while collaborating with him on various projects?

That [trust] happened on Slither. What that trust translates to is that you have the ability to fail without repercussions. You can try something new. You can experiment to find something amazing and not worry about failure. I don’t mind failing if it helps us find something great. Failing in front of James is wonderful because he’ll really make it stink and we can laugh about it and move on. It’s that shorthand you have with old friends, not because you’ve known them for so long, but [because they’re] friends who are there no matter whether things are good or bad.

Have you ever had a role you feel you “failed” to play?

Yes. Back when I was a younger man, I spent two and a half years on a sitcom. My first half-season? I did a great job. My second season? Spectacular. My last season was the worst. I failed because I was trying to be funny rather than just being honest. It was a hard lesson to learn.

Two Guys, a Girl, and a Pizza Place? I have that on DVD.

That’s the one. I’m not going to say [the show was] a failure. Just to my learning experience, I slipped a bit. Also, where did you get a DVD of that?

Right here. Have you ever thought about a Two Guys revival?

A couple of years ago, I ran into one of my former cast members. We were laughing about old times, and he mentioned, “Wouldn’t a reunion be great?” Wouldn’t that be cool? Just do a one-off and see what happens. So yeah, it’s been mentioned. Nothing’s planned. Nothing’s in the works. But the idea has been tossed around.

No spoilers here, but did the scope of T.D.K.’s role allow you to experiment as an actor?

Again, it’s not about what I want. The role has a function. Once you understand what that function is, that becomes the driving force. That’s what I want. I want to serve the story.

Costumes thrill me. Halloween is my favorite holiday. Also, what [our] wardrobe department did was A) phenomenal and B) rushed. They had a time-crunch to get these things finished.

I had never been involved in a project that had costumes [play] such an integral part. For me, the experience was something you dream about. “I can’t wait to put on this costume and do these things.” But you don’t think about the downsides. If you are wearing gauntlets on a beach, sand gets in there. It will rub the skin off your wrists. It takes you down a peg. And I wasn’t the worst off. Poor Mayling Ng, with the hours she had to spend in make-up, and rubber plastered onto her... It was complex. Costumes fell apart because we’re in the water.

How was the headpiece?

It fit exactly [to my] head. I was surprised by how comfortable that was. Peacemaker’s [headpiece] didn’t look comfortable. But mine had flex. I could hear, I could see. I was fine with mine.

Before The Suicide Squad, you’ve voiced Green Lantern in DC’s animated films. What’s it like playing a wildly different character in the DCEU?

It’s nice to have a piece, you know? First and foremost, I’m a fan of these kinds of movies. This is exactly the kind of thing I’d like to do on a Sunday: saddle up with a big box of popcorn, sprinkle Buncha Crunch in there, and watch a spectacle. To play something unexpected, to stretch yourself a bit and widen your repertoire, it’s icing on the cake. I get to go to work every day doing a job I love. This is something no one can take away from me.

A few years ago you “scratched an itch” performing in Allan Ungar’s Uncharted fan film. Do you still have the itch to play Nathan Drake again someday?

It scratched an itch just being able to see it as a fan of the Uncharted franchise. Fans just wanted something. Right now, I’m super excited to see what they’re going to do with that property. Now we have Tom Holland and Mark Wahlberg, guys who have never let us down. I’m super excited to see them together. Two tastes that taste great together. I want to watch them on a Sunday with popcorn and Buncha Crunch.

I thought I was the only one who mixes popcorn and Buncha Crunch.

It’s perfect in the dark. You don’t know if you’re going to get a piece of chocolate.

The Suicide Squad opens in theaters on August 6.