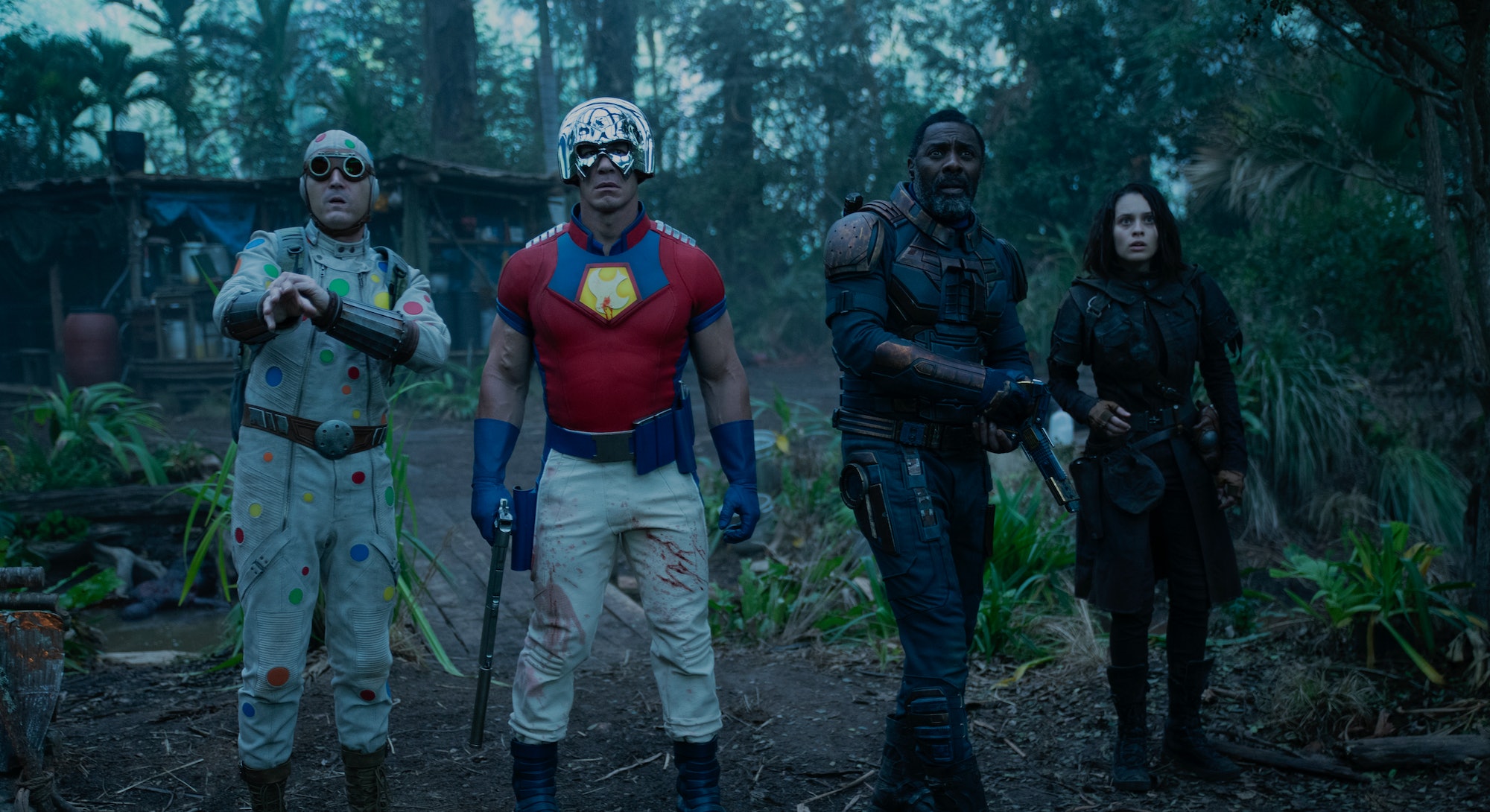 “You know the deal,” Viola Davis commands as the hard-nosed Amanda Waller. “Successfully complete the mission; you get 10 years off your sentence.”

While it may not soar the same sentimental highs as Gunn’s deceptively similar Guardians of the Galaxy, The Suicide Squad stands defiantly as a bloodletting hard-R romp that pops with more color than the John Ostrander comics it pays homage to — plus affections for dadcore war pictures like Platoon and The Dirty Dozen.

James Gunn and the rest of the team more than rise to the challenge in this DC Extended Universe sequel. Mission accomplished.

While The Suicide Squad is a sequel instead of a reboot, it’s obvious the producers are eager to have audiences forget 2016, when Ayer’s mangled-to-bits Suicide Squad drew more ironic laughter than genuine emotion. Continuity is minimal. Margot Robbie’s standout Harley Quinn returns from Suicide Squad and Birds of Prey, but there’s nary an explanation of how she’s here. She knows Captain Boomerang (Jai Courtney) and square-jawed Rick Flag (Joel Kinnaman) like old friends, but you won’t hear a reference to their last outing five years ago. Anyone who didn’t make the cut from Ayer’s film may as well not exist.

The premise, too, is mostly the same. Bad guys are sent by amoral Amanda Waller to do good on behalf of the United States. This time, the threat is in fictional Corto Maltese, a scenic, sun-drenched South American island where the Thinker (Peter Capaldi) controls a giant alien, Starro. (Originally a Justice League villain, Gunn’s use of this monster feels like an intentional joke that only makes sense to him.)

There’s a preoccupation with parenthood that serves most (but not all) of the Suicide Squad’s members. Bloodsport, whose strained relationship with his delinquent daughter is the inverse of Will Smith’s Deadshot and his child. However, Gunn seems unwilling to say anything definitive about family beyond the idea that it matters most who you choose to be with, a lesson he already nailed in Guardians of the Galaxy.

A superhero movie cosplaying as a ‘70s war movie.

The Suicide Squad is more auteur film than superhero blockbuster. Gunn’s take couldn’t be more different from Ayer’s, which suffered from meddling by a studio too focused on its rivalry with Marvel. Freed from build-the-franchise obligations, Gunn injects color and broad political satire into a superhero movie cosplaying as a ‘70s war movie, where lush green jungles and overexposed white sun stand in contrast to Ayer’s gloomy commercial for Hot Topic. Even a final battle with an obviously CGI Starro doesn’t deter The Suicide Squad from feeling vintage.

The first Suicide Squad was meant to be a dark, moody ensemble about supervillains challenged to do one good thing. Then, studio-enforced editing turned it into a pale Guardians of the Galaxy ripoff replete with unmotivated needle drops, drab color, and Batman cameos in an inert script.

As if the studio wanted Suicide Squad to be Guardians all along, DC snatched up Gunn — during a brief period when the filmmaker was ousted from Disney over bad tweets — and freed him to channel more of his transgressive Troma roots the Disney machinery would never allow. It was a smart hire. Gunn instinctually knows what belongs here and what doesn’t, and so much of it syncs up to his pre-existing sensibilities.

Full of memorable anti-heroes who feel wholly unto themselves.

But Gunn’s true talent was never just putting boomer music in genre epics; it’s his ability to earn trust from actors to get something unforgettable. While the film’s action set pieces are impressively staged, it’s his characters who really explode.

Robbie proves once again she can play Harley Quinn forever and never spin wheels, though she could do with a more meaningful arc. John Cena is a goddamn revelation as a deadpan do-gooder whose moral compass is as broken as it is misguided. Daniela Melchior is a secret weapon. Stallone’s King Shark is the DCEU’s answer to Groot.

You may not fall in love with these characters as much as Gunn’s Marvel misfits, but The Suicide Squad is full of memorable anti-heroes who feel wholly unto themselves.

The Suicide Squad is a true ensemble piece the first movie wasn’t. It doesn’t hit as hard in the heart as Gunn’s Guardians — its heroes are more selfish and self-serving, and the universe is more cynical as it sprays blood like Jackson Pollock with red paint — but thanks to Gunn’s careful and calculated stewardship, The Suicide Squad is a stone-cold classic that stands out as, paradoxically, one of the most original comic book movies since, well, Guardians of the Galaxy.

The Suicide Squad opens in theaters and HBO Max on August 6.