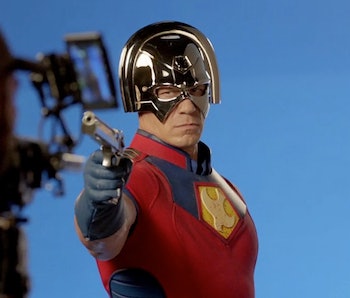 HBO Max is taking a page out of The CW playbook with an ambitious slate of upcoming DC Comics adaptations. The streaming service picked up a Green Lantern show, a Gotham spinoff set in the world of Matt Reeves’ The Batman, and several original shows that once called DC Universe home (Doom Patrol, Harley Quinn). Peacemaker, The Suicide Squad spinoff series, is also coming to the streaming service with John Cena in tow.

First announced in September 2020, Peacemaker follows the character from James Gunn’s The Suicide Squad (not to be confused with David Ayers' Suicide Squad from 2016). Gunn wrote all of the series’ episodes and directed a number of them as well. Gunn reveals why he wanted to do a series about this character in a press release.

"Peacemaker is an opportunity to delve into current world issues through the lens of this superhero/supervillain/and world’s biggest douchebag. I’m excited to expand The Suicide Squad and bring this character from the DC film universe to the full breadth of a series. And of course, to be able to work again with John, Peter [Safran], and my friends at Warner Bros. is the icing on the cake.”

What is Peacemaker all about? Here’s everything we know about the series, including its release date, plot, and cast.

Who is Peacemaker in the comics?

There are actually three different versions of Peacemaker in the comics. Cena will be playing Christopher Smith, the very first iteration of the character. Christopher is so passionate about bringing peace to the world that he often uses aggressive force to do so, founding the Pax Institute to take on dictators and other types of real-world villains.

He learns that the reason he's so committed to fighting evil is that his father was a Nazi. Peacemaker is notable for wearing a flight pack and an armored helmet (which he believes is haunted by the people he's killed). The character was also an inspiration for The Comedian in Alan Moore's Watchmen.

When is the Peacemaker HBO Max release date?

How many episodes are in Peacemaker?

Peacemaker will consist of eight episodes. HBO Max is taking a page out of Amazon's book with its release schedule. The first three episodes will drop all on January 13, and the remaining five episodes will air weekly after that.

Who is in the cast of Peacemaker?

Cena will, of course, be reprising his role as Christopher Smith. Steve Agee will also be joining the series, returning to play John Economos, one of two characters he's playing in The Suicide Squad (the second being King Shark). Jennifer Holland also reprises her role as NSA agent Emilie Harcourt (and happens to be the partner of James Gunn).

They will be joined by plenty of new cast members. Danielle Brooks (Orange is the New Black) plays Leota Adebayo, who Gunn describes as the co-lead of the series with differing political viewpoints than Peacemaker. Robert Patrick (Terminator 2) plays Peacemaker's father, Auggie Smith. Freddie Stroma will bring the role of Adrian Chase/Vigilante to life, playing a crimefighter who can quickly heal from injuries. Chukwudi Iwuji rounds out the main cast as Clemson Murn.

What is the plot of Peacemaker on HBO Max?

Cena's Peacemaker also believes in peace no matter the cost, and the HBO Max series will explore the character's origin story prior to joining the ranks of the Suicide Squad. According to Deadline, Belle Reve Federal Penitentiary will be included in Peacemaker.

It's possible that is where the titular character will start out and where he'll cross paths with Amanda Waller, the leader of the semi-secret government agency A.R.G.U.S. As it turns out, John Economos is working as Waller's aide while working as the penitentiary's warden. Surprise! Whether or not Peacemaker will end up there and if John will assist in his potential escape is unclear, but the twist certainly adds to the show's air of intrigue and mystery.

Is there a trailer for Peacemaker?

Yes! The highly-anticipated trailer for Peacemaker was released on December 3. You can check it out below.

Peacemaker premieres with its first three episodes on January 13, 2022 on HBO Max.