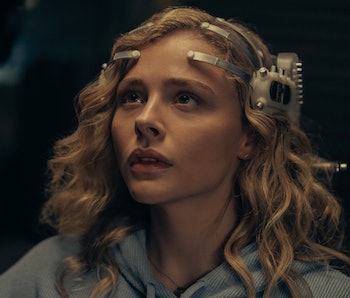 Depending on who you talk to, cyberpunk was probably invented by Philip K. Dick (by accident), codified by William Gibson, and then made utterly mainstream by Ghost in the Shell and The Matrix. In the 21st century, the cyberpunk aesthetic from the ‘80s and ‘90s carried over into sci-fi shows like Altered Carbon and Westworld. But now, with The Peripheral, cyberpunk has been reborn for a modern audience.

Based on the William Gibson 2014 novel of the same name, The Peripheral partly takes place in the 2030s and also in the 2090s. Throughout the series, the action alternates between these two settings, though it would be a pretty big spoiler to say exactly why.

Focusing on two gamers for hire — sister and brother Flynne (Chloë Grace Moretz) and Burton Fisher (Jack Reynor) — The Peripheral creates a tenuous link between the past and the future through what can only be called unconventional time travel. But saying this is a show about time travel would be a little like saying Westworld is a show about robots. And because Peripheral is produced by Westworld gurus Lisa Joy and Jonathan Nolan, the aesthetic comparisons between the two series are unavoidable.

But Peripheral finds what Westworld still sorely needs in its scripts from writer and showrunner Scott B. Smith. Instead of metaphorical ruminations about what all the sci-fi concepts represent, The Peripheral is refreshingly about what it’s about. Flynne and Burton play VR video games for rich people to make extra cash, mostly because their sick mother desperately needs very expensive medication. Flynne is the better gamer of the two and takes on a high-paying job that involves her testing out an experimental rig, which probably isn’t a game at all.

Flynne meets all sorts of enigmatic figures in the future-tense VR simulation, specifically Wilf Netherton (Gary Carr) and Aelita (Charlotte Riley), both of who are mystery boxes that won’t drive you nuts. Unlike Westworld or other prestige sci-fi TV, The Peripheral does reward you with answers in pretty much every single episode. Despite being really complex and with a lot of moving sci-fi parts, it’s actually pretty easy to follow. To Joy, Nolan, and Smith’s credit, this kind of high-low combination is also what makes all William Gibson novels so amazing.

Though the show isn’t a wildly faithful adaption of the Gibson book, if you were to look at the Wikipedia page for that novel for like two seconds, or read the book before the second episode drops, you’d still be spoiled on several big plot points. So although Gibson is an amazing novelist — and perhaps the most influential living science fiction writer on the planet — fans who haven’t read the novel may want to wait until after the show’s first season has aired to crack the book.

The surprises in The Peripheral are spaced out in interesting and smart ways, leading to a propulsive denouement at the end of every episode. These are full episodes, too. You can forget your 30-minute Mandalorian-style chapters. Each installment of The Peripheral is hefty, with a down-to-Earth feeling closer to Amazon’s other great 2022 sci-fi series, Outer Range.

After a two-episode debut, The Peripheral will have just one episode weekly for its upcoming eight-episode first season, and this is really the only negative thing to say about it. While the first episode is great, you might not get the full effect of the excellent cast until at least Episode 3. A particular stand-out here is T'Nia Miller, who, fresh from her show-stopping role in Foundation, might be the most intense and interesting thing about the entire show. She’s barely in the first episode but gets a lot more screentime in episode 2.

If you find yourself feeling like The Peripheral is a slow burn, stick with it. It may seem that way at first, but each episode is bigger and better than the last.

To be clear, this is Chloë Grace Moretz’s show, and you can’t imagine it working without her unique talents. It’s easily the best thing she’s ever done, but she’s supported by Jack Reynor, who is so good you feel like he’s a guy you actually know.

The Peripheral hits Amazon Prime Video with a two-episode debut on Friday, October 21, 2022.