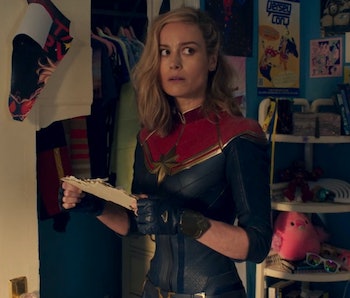 The Marvels may end up being more experimental than Marvel Cinematic Universe fans expect.

The Nia DaCosta-directed Captain Marvel sequel is set to hit theaters next summer, and will bring Carol Danvers (Brie Larson), Kamala Khan (Iman Vellani), and Monica Rambeau (Teyonah Parris) together on-screen for the first time. However, while Ms. Marvel’s post-credits scene does set up Kamala Khan’s role in The Marvels, the film’s plot has remained a tightly held secret for years.

That may be about to change. One new leak claims to reveal several key details about The Marvels’ story, including a section of the film that appears to have been directly inspired by one of Carol Danvers’ wackier space adventures.

The Leak — A Marvel insider known as DanielRPK recently shared a number of alleged plot details from The Marvels.

The MCU leaker claims that around a third of The Marvels will follow Kamala, Monica, and Carol as they journey to a planet where everyone sings instead of talking to each other. Apparently, Larson’s Carol is married to its leader, and the leak also claims that it’ll be on the film’s musical planet where Carol, Kamala, and Monica will be given new costumes.

Of course, given how little is actually known about The Marvels right now, there’s no way of knowing exactly how accurate these claims are. But the suggestion of a singing planet isn’t actually quite as wild as it sounds.

Welcome to Aladna — The singing planet mentioned in this Marvels leak sounds extremely reminiscent of a wacky location that Carol Danvers visits in the comics. Carol is taken to the planet Aladna by a mutant named Lila Cheney in 2014’s Captain Marvel Vol. 8 #9. Once there, Lila tells Carol that the inhabitants of Aladna all speak in rhyme.

Lila notes in the same issue that the planet’s native dialect sounds “like a song,” so Aladna could have easily served as the inspiration for a planet in the MCU where everyone literally sings to each other. Carol’s visit to Aladna also, notably, sees her try to help Lila out of an arranged marriage to the planet’s royal prince, only to end up accidentally taking Lila’s place as the bride.

That twist could very well have been the inspiration for Carol’s alleged marriage in The Marvels. That’s assuming, of course, that The Marvels actually does introduce a marriage between Carol and the leader of a planet of singers.

The Inverse Analysis — While the MCU has dipped its toes into different genres over the years, the franchise has yet to fully adopt the format of a musical. The possibility of The Marvels becoming a musical for a considerable portion of its runtime is, therefore, undeniably intriguing. Whether the film actually manages to pull off its supposed musical gambit, however, remains to be seen.