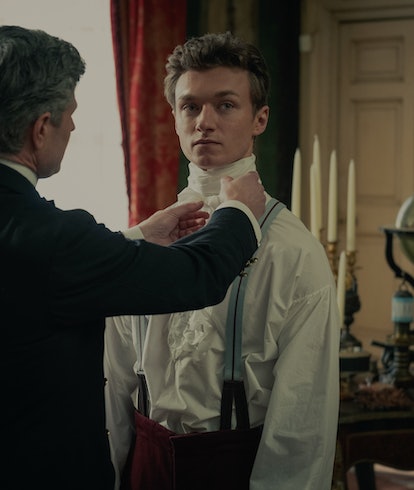 Part of the joy of any good mystery is the process. We love seeing smart people outwit not only criminals, but us, the audience, as well. Even when we’re wrong.

Watching a mystery reach its natural resolution, in all of its granular glory, feels like watching a magic show. Netflix’s The Irregulars is one such magic show, in more ways than one.

With an easy elevator pitch of Buffy the Vampire Slayer meets Sherlock Holmes (especially easy thanks to the literal presence of Sherlock Holmes), The Irregulars comes loaded with procedure. But as with all good magic shows, it comes with some pivotal twists: a few devilish supernatural twists that can never be explained, not even by the cast members themselves.

Take, for instance, Harrison Osterfield, who plays Leopold — better known to his friends as Leo. Speaking with Inverse, long after shooting the first season of the new Netflix thriller, Osterfield says he’s still mystified by The Irregulars. What’s more, he’s still horrified by it.

“I remember quite a few times being actually scared on set,” the actor tells Inverse. “Sometimes I'm definitely not acting; that is actually just me being terrified.”

As Leo, Osterfield presents exactly what you expect from a period drama male lead. He’s a prince, armed with a complicated relationship with his high-class background, a rebellious streak, and a dark secret he hides from most people. That’s a description of most romantic heroes from Mr. Darcy to the Duke from Bridgerton.

But in The Irregulars, Leo isn’t the hero. He’s the fish out of water.

“Sometimes I’m definitely not acting; that is actually just me being terrified.”

Instead, the heroes are the titular Irregulars, a group of rag-tag orphans who survived life in a Victorian workhouse only to end up living in a dilapidated cellar. Bea, Jessie, Billy, and Spike (played by Thaddea Graham, Darci Shaw, Jojo Macari, and McKell David, respectively) are doomed to a life of barely scraping by — until a man named John Watson (Royce Pierreson) walks in. Ring a bell?

This version of Watson is nothing like the classic Sherlock sidekick. He’s a foreboding figure. Adding to the enigma is this: Sherlock himself is nowhere to be seen — not right away, at least.

Bea and her crew are recruited by Watson, and Osterfield’s Leo falls in with them along the way. “I really went in as a blank slate and discovered this world as Leo would,” Osterfield says. “Netflix did an amazing job of creating these incredible sets and costumes where I just sort of slip into that.”

Most mystery shows involve one or more detective (or detective-adjacents) solving a crime, culminating in explanations that are laid out in clear terms. The Irregulars is no different — until it’s very different, thanks to actual magic. One of the Irregulars, Jessie, has the ability to explore people’s memories, for instance. The group comes up against foes as fantastic as the literal Tooth Fairy.

For Osterfield, this kind of fantastical story is completely in his wheelhouse. Before stepping in front of the camera, he started his career as personal assistant to none other than Tom Holland, earning Osterfield a credit on multiple Marvel movies. That experience carried over once it was his turn in the spotlight.

“I spent a bit of time being on these bigger Marvel sets, seeing how the sort of CGI world works and without really knowing anything about it beforehand,” Osterfield says. “Going into The Irregulars, they match that, which was incredible.”

“It doesn't matter where you're from or your background. What matters are the morals and ethics that you try and follow.”

The Irregulars manages a difficult task: finding mutual ground between reality and fantasy. The CGI-heavy effects help reinforce this idea, creating a grimy and dirty environment right at home with the show’s London slums. The motivation behind the visual effects often feels personal, deeply so. That’s very much the point, according to Osterfield.

“Even though there's this crazy stuff going on in this Victorian world with ghouls and monsters,” says the actor, “all the characters are very grounded. The narratives and storylines that emanate through them are very authentic.”

The biggest thing that separates The Irregulars from other mystical monster-of-the-week shows is the demographic. It’s clear from the start the teenage protagonists are meant to relate to teenagers in the audience, offering some Buffy-style romantic intrigue between heart-pounding action scenes.

“It really encapsulates all sorts of genres,” says Osterfield. “We've got the supernatural element, and I think there's also an amazing love story in there. It's a coming of age story with people finding their feet and finding friendships and growing up and being what a teenager is all about. And it’s a horror in there as well.”

Though The Irregulars is technically a Sherlock Holmes-universe story, it stands on its own two feet as a genre-bending supernatural show that gives some much-needed attention to the parts of society other Victorian shows shy away from. For Osterfield, that’s as important as all of the fantastic thrills and the head-scratching mystery.

“What Leo comes to learn is that it's not about your background or your class or anything like that, but what’s in your heart,” says Osterfield. “I think we can really take note from that in any sort of century. It doesn't matter where you're from or your background. What matters are the morals and ethics that you try and follow.”

The Irregulars premieres on Netflix March 26.