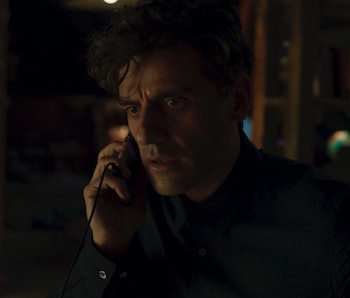 Marvel fans may be only a few weeks away from finally getting to see Moon Knight, but there’s still a lot they don’t know about the Disney+ series. Previous Moon Knight trailers have done a lot to sell the fractured, confused mental state that its central hero, Marc Spector (Oscar Isaac), will occupy throughout it, but the show’s actual plot has remained shrouded in mystery.

The same goes for the series’ place within the Marvel Cinematic Universe. While we know that Moon Knight will be set in the MCU, it’s still unclear what Marvel’s long-term plans are for the show’s hero, or how the events of the series will connect to the larger goings-on of the studio’s intricate universe.

That said, it looks like Marvel fans now have reason to believe that one longtime MCU hero will appear in Moon Knight.

The Rumor — During one of their recent episodes, the hosts of The DisInsider Show podcast revealed that they’ve heard Mark Ruffalo will appear as Bruce Banner in Moon Knight. The hosts didn’t offer much information beyond that, including what the nature of Ruffalo’s role will be or how much of a presence he’ll actually have in it.

However, this rumor does come several months after Ruffalo was spotted in the same Budapest hotel that Oscar Isaac was staying in while shooting Moon Knight . That incident is what led many fans to begin speculating about Ruffalo having a surprise role in the Disney+ series.

Now, this rumor raises the possibility that there may have been more to those fan theories than initially thought.

Welcome to the Team — As one of the few remaining original Avengers, Ruffalo’s Bruce Banner has the potential to take a larger, Nick Fury-esque role in the MCU moving forward. At least, that’s what his appearance in the Shang-Chi mid-credits scene seemed to hint at, with Ruffalo essentially showing up just to welcome Simu Liu’s Shang-Chi onto the MCU’s main stage.

With that in mind, it’s possible Ruffalo’s alleged cameo in Moon Knight could involve him trying to convince Oscar Isaac’s Marc Spector to join the Avengers. Similar to Shang-Chi, Moon Knight promises to be a powerful new addition to the MCU, so it’s not hard to imagine that his actions will catch the attention of someone like Bruce Banner.

Alternatively, it’s possible that Ruffalo’s appearance in Moon Knight could simply help set up his role in one of Marvel’s other 2022 Disney+ originals, She-Hulk. So far there’s been little to suggest that Moon Knight and She-Hulk will be connected in any way, but if Mark Ruffalo really does show up in the former there’s no reason to believe his appearance won’t have something to do with his role in the latter.

The Inverse Analysis — As is always the case with these kinds of rumors, there’s no way of knowing for sure whether Bruce Banner really is in Moon Knight until the series’ first season has finished airing on Disney+. That said, it’s not the most outlandish rumor we’ve ever heard, especially given that Ruffalo and Isaac were both in Budapest at the same time last year.

Unfortunately, even if he does have a role in the Disney+ series, it’s impossible to say what part Bruce Banner could play in Moon Knight’s story. However, with Mahershala Ali’s Blade also rumored to appear in Moon Knight, it’s looking like the upcoming Disney+ show may feature more notable MCU cameos and connections than Marvel wants you to think.