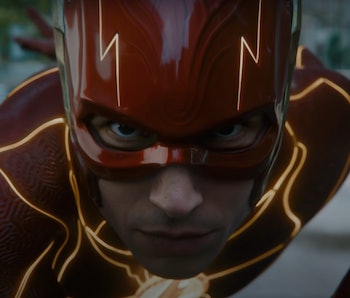 The Flash is shaping up to be one of the biggest DC Comics films that Warner Bros. has ever made. The film, which isn’t set to hit theaters until summer 2023, will bring to life multiple iterations of several familiar heroes. Ezra Miller, for instance, is expected to play two different versions of Barry Allen in The Flash, while both Michael Keaton and Ben Affleck are set to appear as their respective versions of Bruce Wayne.

Keaton and Affleck aren’t the only major names expected to appear in The Flash though. The film is rumored to feature appearances from a number of established DC Extended Universe characters, including everyone from Michael Shannon’s Zod to Temuera Morrison’s Thomas Curry. Now one new DCEU leak suggests that, in addition to Affleck’s Batman, The Flash may include a surprise appearance from another one of Ezra Miller’s Justice League co-stars.

The Leak — In response to a report about The Flash, Marvel and DC insider KC Walsh recently tweeted that Henry Cavill has already filmed scenes as Superman. If true, that would make The Flash the first superhero film since Zack Snyder’s Justice League to feature Cavill as the iconic DC character.

That said, if he is in The Flash, it’s unclear what Cavill’s role could be, including whether he’ll appear as the same version of Superman that DCEU fans have already gotten to know, or as an alternate reality version of the hero.

Flashpoint’s Superman — One of the few details we know for sure about The Flash is that it’s shaping up to be a loose adaptation of Flashpoint. That DC comic book storyline sees Barry Allen go back in time to prevent the murder of his mother and, in doing so, causes reality to be totally rewritten. The story primarily follows Barry after he makes his journey and finds himself in a timeline where his mother is still alive, but the Justice League doesn’t exist and the Amazons and Atlanteans are fighting each other.

At one point, Barry discovers a version of Superman who’s been kept in captivity in an underground facility by the American authorities ever since he was a child. He’s eventually freed and shows up during the storyline’s climactic battle to provide aid to Barry and his allies.

Depending on how faithful The Flash is to its source material, it’s possible that Cavill could appear in the film as a version of Superman similar to the one featured in Flashpoint. That said, given how much secrecy currently surrounds the film’s specific plot details, there’s no way to know for sure what Cavill’s role may be.

That’s assuming, of course, that this leak is even correct and the Man of Steel actor actually is in the film.

The Inverse Analysis — Henry Cavill’s future as Superman is up in the air right now. With no sequels to Man of Steel or Batman v. Superman seemingly in the works, it’s hard to know what Warner Bros.’ plans are for Cavill’s iteration of the DCEU hero.

But that’s why the rumors about Cavill showing up in The Flash are so intriguing. Not only do they suggest that fans will get to see the actor reprise his role as Superman sooner than they may have expected, but they also raise the possibility that Warner Bros. and Cavill may be working together to make Superman a major presence in the DCEU again. That’s an exciting possibility regardless of what role he could actually play in The Flash.

More like this
Entertainment
8 hours ago
DC’s New Secret Weapon is Director-Driven "Elseworlds" Movies
By Eric Francisco
Entertainment
9 hours ago
The Batman: Part II — Everything we know about the Robert Pattinson sequel
By Gabrielle Bondi
Entertainment
Jan. 26, 2023
Shazam! Fury of the Gods trailer pits the family against Helen Mirren and her dragon
By Mónica Marie Zorrilla
LEARN SOMETHING NEW EVERY DAY.
Related Tags
Share: