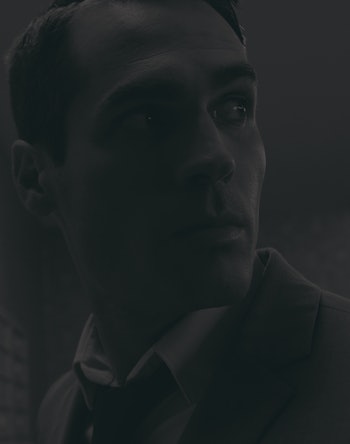 Deployed by politicians to target hyper-specific groups on Facebook, the service made it simple to put targeted ads in front of certain voters based on their interests. It egged on the culture war and swayed elections with propaganda, in the form of misleading ads in the Facebook newsfeed.

That sort of data scraping, profile building, and targeting can just as easily be weaponized to wreck your love life. At least, that’s the premise of The Beta Test, the third feature from actor, writer, and director Jim Cummings, whose previous films about high-anxiety men in high-stakes circumstances (Thunder Road and The Wolf of Snow Hollow) demonstrate how male performativity screws men up and makes life miserable for everyone caught in their orbit.

The Beta Test bakes that motif into a Los Angeles neo-noir about Jordan, a wannabe hotshot talent agent (played by Cummings) whose life unravels after he receives an anonymous letter inviting him to a one-time, no-strings sexual liaison. He accepts, then begins to wonder who sent him the invitation, and promptly starts to spiral.

For PJ McCabe, who co-wrote and co-directed the movie with Cummings, it’s also a chance to skewer some of his favorite noir movies.

“It’s like goofy Chinatown,” McCabe tells Inverse. “That was the idea, making fun of our favorite L.A. noir movie with this sad protagonist who’s not a cool noir guy, just this sad dude who got picked over the internet and is in over his head.”

Online spying may not look as creepy as a stalker with binoculars or as cool as a private detective doing the legwork on a case, but even a loser hunkered in his basement can do it.

Data and murder — Jordan’s downward spiral is set off when he becomes a victim of data scraping. In simple terms, data scraping is the compilation and storage of information from websites, usually for nefarious purposes. It might comprise harvesting personal information via social media and selling it to scammers and spammers.

Cummings thinks of data scraping in the same terms as modern warfare.

“This isn’t Zero Dark Thirty,” he tells Inverse. “This is Zero Days, the Alex Gibney documentary about Stuxnet.”

Once, if someone wanted to hurt a rival power, they had to get their hands dirty. Now, viruses and malware do the dirty work for them.

“It’s just as effective as bombing the place,” Cummings says.

The Beta Test only figuratively blows up Jordan’s life, but his efforts at sleuthing go from bad to worse until you sense he might prefer a fiery explosion. Cummings and McCabe were inspired by Michael Haneke’s 2005 movie Caché, the story of a husband and wife tormented by a series of anonymous tapes containing hours of footage of their home.

Pairing Haneke’s plot with Chinatown’s tone, Cummings and McCabe shaped The Beta Test into a story about lying and cheating. And, having sidestepped studios to make their film independently, the pair found a natural setting in the world of talent agencies, which Cummings says are “full of liars and cheaters.”

Jordan’s targeted because, as a shameless liar who puts on a swaggering macho front, his professional persona makes him a perfect mark. But nothing about Jordan’s peers is genuine either, which gave Cummings and McCabe a bridge between their Hollywood satire and the subject of digital harassment.

Other people in Jordan’s industry receive their own anonymous invitations. Unlike Jordan, they end up dead, victims in a data-fuelled conspiracy our sleazy hero needs to unravel. Someone’s out to get Hollywood’s talent agents, fusing an archetypical neo-noir conspiracy with satire and the perils of modern privacy invasion.

“It is feasible to find people, scrape their data, and pair them with someone local who’s perfect for them, and who might, with a little push, stray from their relationship.”

The Beta Test hinges on data scraping while belying its intricacies. But it’s real, and arguably more terrifying than the film portrays. “We had a buddy actually build the algorithm,” says McCabe. “It is feasible to find people, scrape their data, and pair them with someone local who’s perfect for them, and who might, with a little push, stray from their relationship.”

The bigger picture — A disastrous sexcapade is only one way that data scraping can ruin someone’s day. Erica Darragh, community manager for digital rights nonprofit Fight for the Future, spoke with Inverse about methods that affect people whose lives are less messy than Jordan’s.

Brokers stock databases with all manner of data purchased from the websites and apps that collect it, or data obtained through hacking. Then they create individual profiles to sell to, as Darragh says, “pretty much everyone.”

“Everyone” is a long list, but hiring and rental application services immediately spring to Darragh’s mind. “That information is used to make life-changing decisions,” she says. “Whether people can get a job, whether they can live somewhere. And it's not like a credit score where you can contest information that is incorrect or even see it. So there’s a whole sinister side of the way that data collection impacts people's lives.”

For another example, just look at headlines about the Facebook whistleblower saga, or 2016’s infamous villain, Cambridge Analytica.

“That was basically a psychological warfare military service company that transformed into a political consultant,” says Darragh. “They had all this data collected from Facebook and used it to create personality profiles of people, then used that information to create propaganda that was very specific to different groups.”

Cambridge Analytica’s efforts affected the outcome of the 2016 presidential election and Brexit and, if that wasn’t bleak enough, Darragh says data manipulation has “really gone downhill from there.”

On a sunnier note, she believes we’re trending toward more overt forms of surveillance — such as Amazon’s biometric technology that lets people pay for goods or scan concert tickets with a swipe of their palm — and awareness of data collection’s existence in contemporary life has grown as a result. But Darragh worries that people are “very much unaware or in denial of the consequences of that, too.”

It’s not a broad representation of data scraping’s real effects, but that works to The Beta Test’s advantage. It's a terrific movie full of dry, caustic humor, paranoia, and danger, wrapped up in the rich temptations of its setting and culture. But Cummings’ and McCabe’s work only scratches the surface of the threat data scraping represents today.