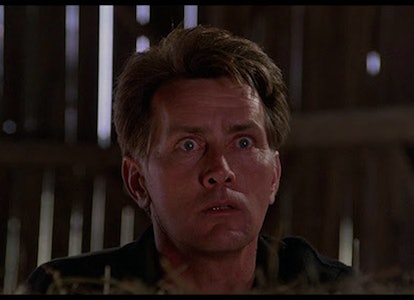 In the wide world of cult thrillers, it’s hard to find one without a gimmick. Maybe it’s a mockumentary, perhaps it’s multicolored, but every cult movie now has to have something to set it apart from the others.

Because of that, watching a straightforward thrillfest is almost a novelty, and this 1987 film centered on religion and ritual sacrifice is the “greatest hits” of all the best parts of a no-frills all-thrills experience.

Starring a pre-West Wing Martin Sheen, The Believers is a horror thriller directed by Midnight Cowboy’s John Schlesinger. Here’s why this cult-like movie is worth adding to your Amazon Prime Video watchlist.

The Believers follows therapist Cal Jamison (Martin Sheen), who has the perfect life: a great son, a hot wife, and a “don’t cry over spilled milk” outlook.

That is until some actual spilled milk causes his wife to electrocute herself when reaching for the coffeemaker. Then, all of a sudden, Cal is a single father moving to Manhattan to become the resident therapist for the New York Police Department.

Because of his job, he ends up embroiled in a scandal involving high-powered yuppies, a Cuban cult involving child sacrifice, and a truly terrifying pimple. Throughout, the movie delivers the scares and action at face value — for better and for worse.

On the bright side, the plot is genuinely tense, amping up from “uneasy” to “a matter of life and death” without noticeable plot devices. The story unfolds like a noir or a crime procedural, with Cal following the clues from point A to point B within the case and his own life.

Along the way are Jimmy Smits and Robert Loggia as cops on the case of a mysterious cult behind the overdose deaths of multiple children. And that’s just the tip of the dark iceberg of the real truth.

Unfortunately, having a Latin American fringe religion portrayed as a cult is still really problematic. In 1987, late great critic Roger Ebert touched on this in his review of The Believers:

“Every voodoo movie ever made has depicted bloodthirsty cults of savagely sadistic murderers, vengefully thirsting for innocent blood. There has been a lot in the papers recently about ‘Arab-bashing,’ the practice of creating strongly negative stereotypes of Arabs on TV and in the movies. I'm in agreement. But what about voodoo-bashing? Isn't it just as prejudicial?”

While the lack of some clever gimmick can be seen as a plus, it also exposes the sheer xenophobia that was rampant in the era. This isn’t a film that should be viewed non-critically. Santeria, the mystic-heavy Catholic sect demonized in The Believers, is a real religion that many use to find meaning in their lives. Defining it as a “cult” is a dangerous prospect, but that’s the message this film is delivering.

That’s why a film like this could only exist in the 1980s. There is no gimmick, but there also is no beating around the bush. It’s absolutely not a method that should be replicated, but in context, The Believers makes for a great movie night. Come for the cult sacrifice; stay for the scene where a bunch of spiders crawls out of a lady’s face.

The Believers is now streaming on Amazon Prime.