“We were gonna change the world.” 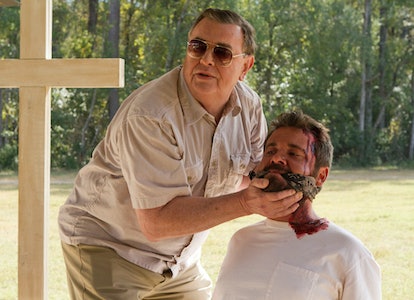 As horror genres go, found footage is a paradox.

In order to be believable, the footage can’t be too high-quality. Compare the shaky-cam grittiness of The Blair Witch Project with M. Night Shyamalan’s The Visit, which featured crystal-clear cinematography despite being supposedly filmed by a teen with a second-hand camera.

Typically, in order to be convincing, a found footage film has to look at least a little bit bad. Thankfully, one 2013 film found a loophole to avoid this issue — and used it to artistically interpret a shockingly real tragedy from history.

The Sacrament is a 2013 film directed by Ti West and produced by horror mogul Eli Roth. It begins unlike any thriller I’ve ever seen: with a Vice documentary intro. Not simply found footage, The Sacrament is also a mockumentary, attaching the Vice name to its framing device in order to add a whole new layer to its believability and realism. Everyone speaks as subjects do in Vice docs, with a philosophy of diving into the heart of darkness.

In this case, that darkness is Eden Parish, a idyllic commune in a foreign country. As the film opens, fashion photographer Patrick (Kentucker Audley) is invited by his sister, recovering addict Caroline (Amy Seimetz), to visit the commune. She allows two people from the Vice crew to tag along: cameraman Jake (Joe Swanberg) and reporter Sam (AJ Bowen).

Upon arrival, everything looks normal — or at least as normal as a reclusive commune can be. The people are happy, sustainably farming and living off the grid. Then the crew meets The Father (Gene Jones), the charismatic leader of the group who founded Eden Parish.

Over the course of barely 24 hours, the situation at Eden Parish goes from welcoming to deadly, with Sam, Jake, and Patrick all fighting for their lives and tasked with escaping to a helicopter before it’s too late.

If “a remote cult outpost in a foreign country that descends into death” sounds familiar, that’s because this film was heavily inspired by real events at the Peoples Temple Agricultural Project, better known as Jonestown.

Most importantly, just like in The Sacrament, Jonestown’s leader Jim Jones grew increasingly paranoid about outsiders entering the settlement and convinced dozens of followers to drink poison and take their own lives along with him — in order to die on their own terms, and not those of supposed invaders.

While exploiting any tragedy like this for a horror-thriller is ethically dubious, The Sacrament makes up for this by correcting a number of myths surrounding Jonestown. Most importantly, it underlines how the “mass suicide” wasn’t a suicide at all. Children were fed the poison unknowingly, and those who didn’t want to drink it and ran were shot dead.

Outside of its real-life inspirations, The Sacrament is a compelling thriller that avoids found footage traps thanks to its mockumentary format. This movie resembles an actual documentary because it’s meant to be one. It doesn’t have to look like a student film to be believable, and can even indulge in some shot-reverse-shot sequences thanks to Patrick serving as a second cameraman.

This format also absolves The Sacrament of another sin found footage films commit regularly: lackluster pacing. Portraying everything as seemingly ideal in the beginning of a horror film can be essential to the third-act rug-pulling of its plot, but this can also grow incredibly tedious. But because of The Sacrament’s polished documentary format, professional editing makes this more bearable, as tension quietly simmers to the point of horror.

If you’re someone who wants to know more about cults but gets squeamish around true crime-style documentaries, this lightly fictionalized account offers enough cinematic distance to keep things entertaining, while also delviering enough fact to make the film a sobering watch.

909 people died in Jonestown. The Sacrament doesn’t exactly honor their memory, but it makes up for this by correcting media misconceptions around their tragic deaths.

The Sacrament is now streaming on Amazon Prime.

More like this
Culture
6.24.2022 11:30 AM
You need to watch Rosario Dawson’s most underrated psychological thriller before it leaves HBO Max next week
By David Grossman
Entertainment
6.27.2022 11:30 AM
You need to watch the scariest movie of the 20th century before it leaves Netflix this week
By Eric Francisco
Entertainment
6.23.2022 11:00 PM
The Black Phone ending explained: Are the ghosts in Joe Hill's story real?
By Eric Francisco
Related Tags
Share: