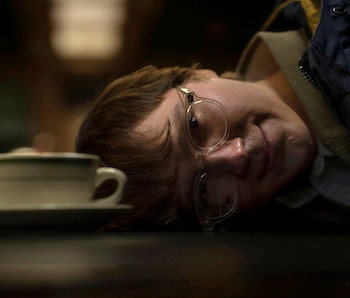 After waiting five years for its release, DC Comics fans finally got to see The Batman last week. The highly anticipated superhero flick from director Matt Reeves hit theaters around the world on March 4th and introduced fans to not only a new Batman (played by Robert Pattinson) but also new versions of Gotham City and several of its most iconic villains. That includes Paul Dano’s Riddler, who’s presented as a terrifying, Zodiac Killer-inspired criminal mastermind.

The film’s final act sees Dano’s Riddler imprisoned in Arkham State Hospital, where he quickly befriends Barry Keoghan’s Joker. The two villains meet in the film’s penultimate scene, which is the closest The Batman comes to directly teasing what may lie in store for a possible sequel.

That said, The Batman does have a brief, seemingly minor post-credits moment, one that it looks like Warner Bros. is using to build some more hype among fans.

Rat With Wings — At the end of The Batman’s credits, viewers are briefly shown a goodbye message from The Riddler as well as a flash of a link to one of the websites the serial murderer uses in the film. At first, the moment seems like nothing more than a cheeky parting message to audiences, but it looks like there may be more to the “scene” than fans initially thought.

The website in question, www.rataalada.com, has recently been updated with a new cipher and a countdown that, as of this writing, is at 56%. There’s no indication as to what may be revealed when the progress reaches 100%, but one can assume that comic book readers are already hard at work deciphering The Riddler’s latest cipher.

Notably, the cipher’s file name is “Its_Not_Over_Yet.jpg,” which suggests that The Batman fans may be treated to quite the surprise when the countdown finishes.

It’s Not Over Yet — There’s no way of knowing for sure what surprises Warner Bros. has in store. However, if we had to guess at what the studio is building towards, there are two possibilities that seem likely.

The first is that the countdown will end with the release of a deleted scene in which Robert Pattinson’s Batman sneaks into Arkham State Hospital and has a conversation with Barry Keoghan’s Joker. Reeves has spoken a lot in recent days about the scene and has repeatedly expressed his excitement about releasing it to the general public at some point. Given all the hype currently surrounding both the film itself and Keoghan’s cameo appearance in it, there’s a real chance that’s what fans will see when this countdown reaches 100%.

Alternatively, it’s possible that this countdown will end with Warner Bros. announcing that it’s officially moving forward with a sequel to The Batman, or with the studio setting a release date for the comic book film’s follow-up. That would certainly be a way to keep the current hype for The Batman alive, and would assure fans that they can look forward to more adventures from Pattinson’s brooding Caped Crusader.

The Inverse Analysis — Coming off The Batman’s immensely successful opening weekend, it’s not hard to see why Warner Bros. would want to capitalize on all the attention the film is receiving. Whether the studio chooses to do that by officially announcing a sequel, releasing some bonus content, or unveiling something else entirely, remains to be seen.

At the very least, this Riddler update proves that fans won’t have to wait as long as they thought for more Batman content.

The Batman is playing now in theaters.