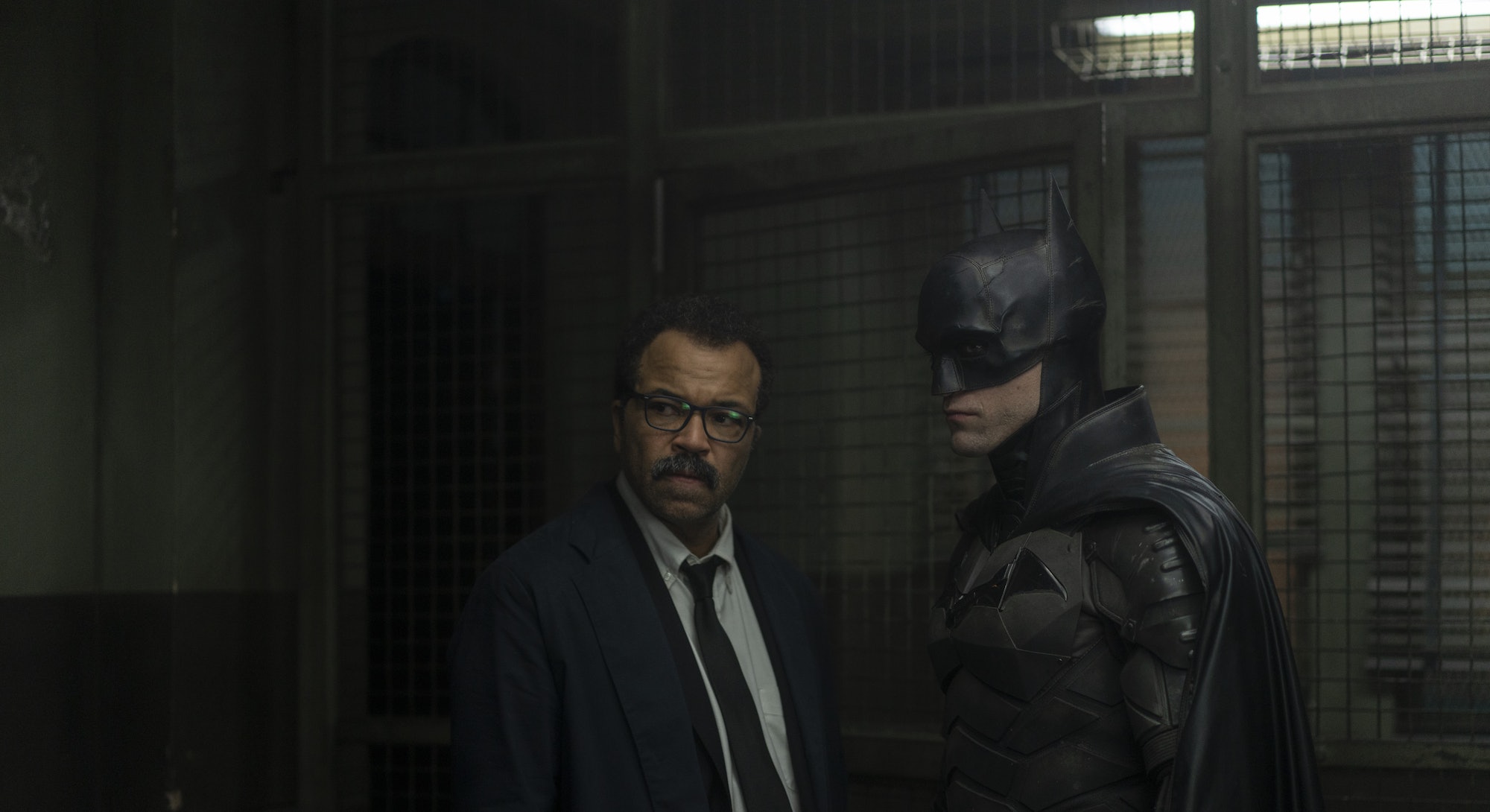 Within the pantheon of timeless fictional icons, very few characters have reached the level of versatility that Batman has enjoyed over the last 83 years.

From his roots as a pulp avenger in the early ‘40s to the neutered science-fiction adventures of the post-censorship ‘60s, into the all-too-familiar vengeance-driven vigilante that has persisted since the mid-80s, Batman can (and probably has) existed in any possible depiction you can imagine. However, there are a few elements of Batman that remain immutable.

Bruce Wayne is rich. Bruce Wayne is white. Batman straddles a fine line between vigilante and police consultant, enjoying both the fruits of a friendship with Commissioner Gordon as well as the freedom to break whatever laws and civil liberties he wants. Despite his many on-screen iterations, The Batman is the first movie that actively forces Bruce Wayne (Robert Pattinson) to confront his complicity in upholding the status quo. At his core, Batman is a character who has deeply-rooted political implications, ones that are becoming more incongruent with the scrutiny of modern audiences.

For proof of this phenomenon today, take a look at the discourse surrounding the character on social media. Hardly a week goes by without a viral TikTok, someone recycling a version of a post about Batman being a fascist or how his wealth would do more for Gotham City than his karate chops and judo kicks can. And no matter how many times the comics showcase that Bruce Wayne is a dedicated philanthropist or reinforce that Gotham’s problems are far too structural and supernatural to be fixed through monetary means, this rhetoric still permeates much of the contemporary discussion regarding Batman. There’s a simple reason for this: Comic books don’t really matter that much in the perception of general audiences.

Batman’s continued endurance as a global icon is solidified by his popularity on-screen — the character has been rebooted five times by as many filmmakers. Because most live-action adaptations choose to strip him from the heightened reality of the medium that birthed him, the premise betrays a right-wing slant. Tim Burton’s Batman is a libertarian power fantasy: a billionaire with resources that allow him to supersede the inept police force to catch The Joker, a force of consistent pure evil — and a depiction of criminality that would make Reagan blush.

“The Batman takes a microscope to the character’s relationship with the police.”

The Nolan films are slightly more self-aware, with The Dark Knight trying to position Harvey Dent as a valid systemic alternative to Batman’s violent methods. But Dent and Gordon are both public officials who bend the law for Batman to operate extrajudicially in their favor. The entire affair carries an underlying implication that sometimes the forces of “order” have to sully their hands to catch the forces of “chaos.” Because the movie unintentionally treats Batman as a necessary appendage of Gotham’s carceral state, things start looking vaguely authoritarian in retrospect.

Ironically enough, Zack Snyder’s Batman in Batman v. Superman is the only one whose methods are framed as villainous, but the movie focuses that lens solely on his attempt to murder Superman. Bruce’s moral arc comes from recognizing Kal-El’s humanity. Still, the film has no qualms reveling in the iconography of Batman shooting regular criminals, blowing them up, or hitting them with his car. Snyder’s Batman is the textbook definition of a fascist. Although it’s based on Frank Miller’s deconstruction of the character in The Dark Knight Returns, Snyder’s film lacks the self-awareness required to take this interpretation of the character to task.

Truthfully, there has never been a cinematic interpretation of Batman that interrogates his methods in a deliberate, unflinching way until The Batman. From the opening sequence, it’s evident that Reeves is enamored with the character. His vision of Gotham City feels lifted directly from the page, and he approaches the material with an earnestness that surpasses the MCU’s sardonic attempts at “sincerity.” But it’s in his treatment of Batman (and Bruce Wayne) that is the clearest example of his love for the source material. The movie is intimately aware of Bruce Wayne’s material privilege, and instead of running from it, Reeves seizes the opportunity to make it a critical element.

In the scene where Bruce steps out of isolation for the first time in months to attend a funeral, an idealist progressive named Bella Réal, who’s running for mayor, corners him. She chides him for not doing more with his money and resources to help the city, especially in the face of his father’s philanthropy. While the scene is deeply ironic due to Bruce’s nightly activities, there’s an undercurrent of truth to it as well. Unlike the comic books, where Batman squares off against nursery rhyme zombies or an eco-terrorist who can control plants, the problems Gotham faces in The Batman are indeed problems that Bruce’s wealth could at least alleviate. It’s something he doesn’t even realize he takes for granted.

“Crime isn’t a phenomenon that can just be punched into submission.”

But Bruce Wayne’s wealth isn’t the only element of the mythos Reeves is interested in deconstructing. The Batman also takes a microscope to the character’s relationship with the police. Here, Batman is well-and-truly on the other side of the law. Except for Jim Gordon (Jeffrey Wright), the police don’t like him, and the feeling is mutual. Every time Batman interacts with the police, there’s a palpable sense of discomfort; to them, Batman represents a level of oversight that they’re not used to having to contend with.

Just like in the real world, the police of Gotham City squirm under scrutiny. Jim Gordon remains a confidant to Batman not because his status represents some virtuous idolization of the judicial system. It’s because Bruce trusts him as a good person.

This isn’t simply window dressing either. Reeves and screenwriter Mattson Tomlin bake this distrust of structural institutions into the heart of the story. The Riddler’s (Paul Dano) entire motivation in the film is exposing the institutional corruption of Gotham City’s trusted officials and the city’s political system as a whole. While he is a serial murderer, the movie never frames his grievances as “wrong.” Unlike Burton’s depiction of the state as inept or Nolan’s presentation of the police as a thin blue line between order and chaos, The Batman directly invokes the city’s rotting political and judicial structures as the root of Gotham’s perpetual depravity. It mirrors our present time when Americans and citizens across the globe are becoming more disillusioned with those who wield institutional power.

Paul Dano as The Riddler in Matt Reeves’ The Batman.Warner Bros.
Catwoman, aka Selina Kyle, is played by Zoë Kravitz.Warner Bros.

By indicting the powerful for the effects of their corruption, The Batman ultimately gives viewers the most nuanced understanding of criminality ever depicted in a Batman film. The movie opens with Bruce reflecting on his first two years as a vigilante, wrestling with the nature of Batman and the seeming non-effect that he’s had on Gotham. Up until this point, Bruce has been weaponizing fear and brutality against the city’s criminal element, but he’s never truly understood the root cause of what breeds criminality: desperation.

When Bruce first meets Zoë Kravitz’s Selina Kyle, he’s eager to pass judgment on her illicit activities. She is an accomplished thief with intimate ties to the city’s criminal underworld, after all. But his desperation for a deeper human connection allows him to get close enough to her to see all of her edges. She grew up an orphan, just like him, but without his privilege and wealth, she was pushed into a life of hardship that ultimately leaves her with no choice but to turn to crime. Even The Riddler is someone who was forced to react violently because the world at large refused to acknowledge him or his struggles. Instead, it emphasized the rich and powerful while the rest of Gotham languished in poverty and squalor.

Both characters force Batman to grapple with his methods, as well as underline how crime isn’t a phenomenon that can just be punched into submission. This subtext is incredibly timely, as the past few years have seen America face a long-overdue reckoning concerning the violent nature of policing and whether the methods employed by the state to crack down on crime have ever truly worked in the first place.

These elements come together to form a scathing indictment for the character, and at first glance, it would seem as if the movie validates those same social media criticisms. But Matt Reeves, in his tangible appreciation for Batman as a force for good, cleverly uses the movie as a way to shift the conversation and position Bruce as something other than a glorified cop with fewer restrictions.

The film's opening narration sees Batman, a creature of shadow that exists as a symbol of violent retribution against criminals, pondering his ineffectiveness at actually changing the material conditions of his city. Nearly three hours later, the movie ends with another narration - Bruce realizing the potential power of Batman as a symbol for hope, juxtaposed against footage of him saving lives in broad daylight. Bruce realizes the people don’t need another urban legend hiding amongst the darkness. He purposefully demystifies the legend of Batman because, after the deceit and distrust from the people who swore to protect them, Bruce realizes that the citizens of Gotham need something tangible to put their faith in.

The Batman does not have picture-perfect political ideas. At the end of the day, it’s still a superhero movie with a messy understanding of authority and systemic issues — and there’s plenty of footage of Batman cracking skulls and breaking laws. But by pitting Batman up against institutional corruption in his first outing, Matt Reeves deviates from previous incarnations of the character. Snyder, Nolan, and Burton all see Batman as someone who holds power above the citizens to protect them from forces they can’t understand.

Here, Bruce Wayne’s grand realization is that Batman has to fight for the will of the people, amongst the people, against the very same institutions that make hollow promises to protect them — because no one else will.

The Batman is now playing in theaters.