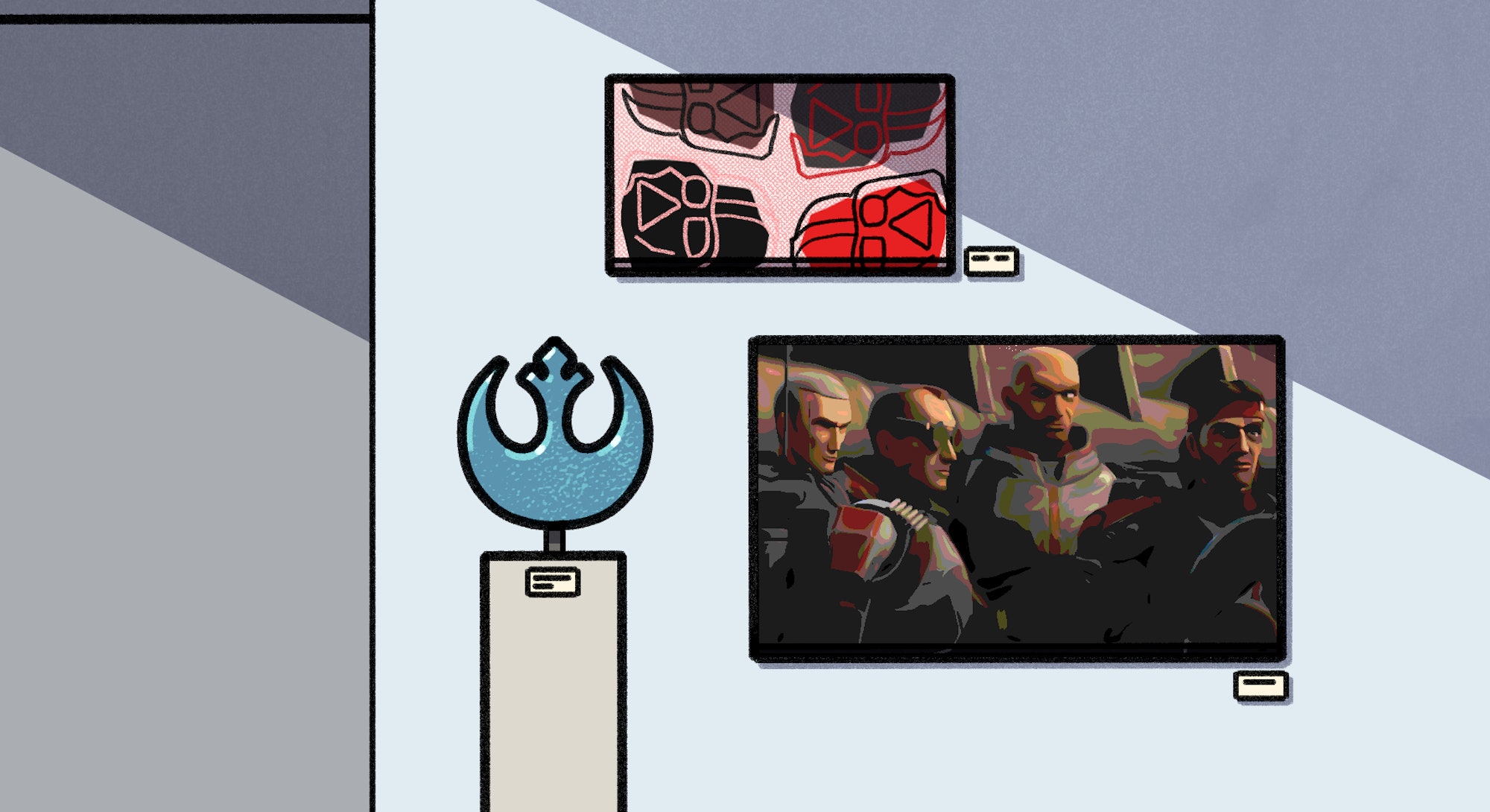 The legacy of Luke Skywalker, Princess Leia, and Han Solo — as it exists throughout nine big-screen installments — altered the movie-going experience forever, transformed science fiction as we know it, and cultivated a global fandom still thriving 44 years later.

Keeping in lock-step with fan demand, Disney+ has ramped up its small-screen Star Wars lineup. Its latest is Star Wars: The Bad Batch, which appropriately premiered on May 4, aka “Star Wars Day.” The new animated series delves beyond the computer-generated Clone Wars into that mostly untapped era between the prequels and the original trilogy.

Bad Batch follows Clone Force 99, a squadron of irregular clone troopers who were introduced in a mostly forgettable Clone Wars Season 7 arc. In the new series, the unlikely group of heroes struggles to find where they fit in after the rise of the Empire and the call for all Jedi to be destroyed puts their lives in turmoil. (Because of their mutations, these clones are mostly unaffected by Order 66.)

For Tessa Van Boxtel, the release of the series means the chance to finally see new characters and untold stories that have only been teased in other Star Wars media.

“While Star Wars Rebels gave us some background to the clones being decommissioned, fans will now get to experience firsthand what happened to the clones who defied or joined the Empire,” Boxtel tells Inverse.

“Frankly, I'm kind of burnt out on Jedi and Sith taking up the spotlight,” says Emily Barr, another Star Wars fan.

Putting that epic conflict in the background is a big pivot for the fandom (even The Mandalorian still hinges on the popularity of “Baby Yoda”), but it’s an intriguing and refreshing one. After over four decades of whooshing lightsabers, a little change may be just what the Jedi Master ordered.

When Star Wars first premiered in theaters in May 1977, no one had any inclination of the groundswell the movie would cause. George Lucas, a relatively unknown director with only two movies to his name — THX 1138 and American Graffiti — struck a chord in Hollywood when his otherworldly take on Joseph Campbell's “Hero's Journey” touched down.

Aside from the movie’s unlikely set of quirky heroes and dastardly villains, remote planets, and jaw-dropping practical effects, the allure of Star Wars was its layered good-vs.-evil journey. Audiences had never seen a villain like Darth Vader, and the conflict between the evil Empire and the Rebel Alliance immersed fans like never before.

Scott Zillner has been there since the very beginning. “I was able to watch it in a drive-in theater back in ‘77 and had the toys early on,” he says.

Matthew Woesner was just a kid when the prequels hit theaters, but his age didn’t stop him from immediately falling in love with the franchise.

“The Duel of the Fates was one of my most defining moments as a child.”

“I absolutely loved the movies, and the concept of Star Wars just seemed so cool to me,” he explains. “Laser swords and magic Force powers were all I needed to have my attention.”

For Van Boxtel, who grew up on the original trilogy, the moment she became a fan was when she stepped into the theater to see Star Wars: The Phantom Menace for the first time at age 11.

“The Duel of the Fates was one of my most defining moments as a child,” she says. “I will never forget the feeling I had when Darth Maul ignited his double lightsaber and the music began booming on the theater speakers. Between that and the pod race scene, I was hooked.”

As hooked as each fan is with the Star Wars canon, they all agree there's a lot of promise with The Bad Batch, and they point to the series that inspired it as proof.

“The Clone Wars have some of the best storytelling and expansive arcs in the entire Star Wars universe,” Zillner says.

The animated series gave George Lucas and his protégé, Dave Filoni, the opportunity to dive deep into Star Wars lore, revealing everything from the origins of Force ghosts to where the Force itself comes from. But one of the most iconic moments in the franchise is still largely unexplored.

Audiences have only seen the fallout of Order 66 (Emperor Palpatine's command to kill all Jedi) from the perspective of the Jedi and Sith. Seeing how it played out for the rest of the galaxy might be The Bad Batch’s biggest hook.

“Very little is known right after Order 66, especially for the Clones and the general population of the Star Wars universe,” Van Boxtel says. “We have now seen Order 66 from the perspective of Obi-Wan, Anakin, Ahsoka, and the 501st, but we don’t know as a greater whole how this affected the universe.”

What’s next for Star Wars?

After the Skywalker legacy came to a rocky end with Episode IX: The Rise of Skywalker, fans have been speculating as to what the future will hold.

Under Dave Filoni’s guidance, The Mandalorian gave us an exciting peek at what a live-action Star Wars show could look like, but while Pedro Pascal explores the outskirts of the galaxy, Clone Force 99 is giving fans a fresh look at a familiar story.

“I watched it twice,” Zillner says.

Van Boxtel calls The Bad Batch “my favorite premiere of any Star Wars animation.” He compares the character development and storytelling narrative to that of The Mandalorian. “It blew me away. The 70-minute premiere felt like I was watching a Star Wars movie rather than just a show.”

Beyond Bad Batch, fans also have plenty of suggestions for where Star Wars should go next.

“I would like to see the underworld more,” Zillner adds. “Bounty hunters, smugglers, crime lords, and that scum. There is such a colorful and underused portion of the Star Wars universe that isn't always seen, and never to its fullest potential.”

Barr thinks taking a Star Trek: Lower Decks approach to a bad guy's perspective could also be a fun choice.

“Here's Bob; he works as a spacecraft mechanic aboard a star destroyer,” she says with a laugh. “And this is Jim, who was responsible for installing guardrails.”

For Woesner, one character in particular deserves their Disney+ moment.

“An animated series covering what Maul is up to between the end of the Clone Wars and Star Wars Rebels would be interesting to see,” he says. “We do see a little bit of what he is up to in Solo: A Star Wars Story, but sadly, I don't know if we'll see any more of that storyline.”

THE DROP is a series from Inverse that highlights the best, freshest, and most forward-thinking releases in entertainment and gaming.