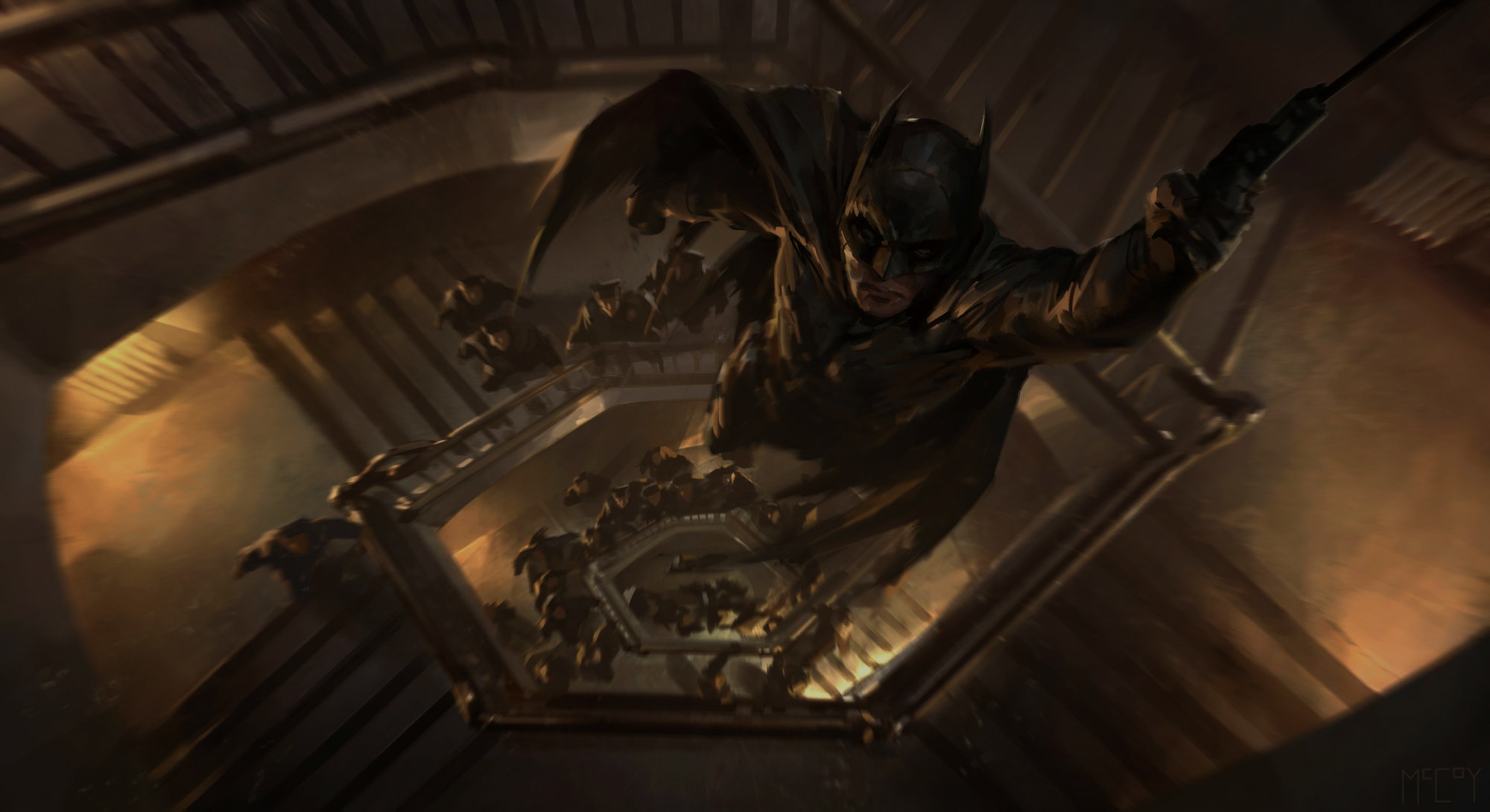 In a movie full of unforgettable visuals, one moment in The Batman stands out.

After Batman is knocked unconscious, he wakes up in the heart of the Gotham City Police Department surrounded by a swarm of corrupt cops. With a bit of help from Commissioner Gordon, the Dark Knight fights his way out of the station, hook-shotting his way up to the roof before inflating his suit like a flying squirrel and flying into the night.

For James Fields, who served as Production Liaison on the set of The Batman and put together the movie’s official art book, this scene epitomizes what he loves about the character, which is why he included the original concept art for it in The Art of the Batman.

“This is one of my favorite pieces of concept art from the production,” Fields tells Inverse. “It captures a classic, dynamic Batman pose that would feel at home amongst the Jim Lee comics, and establishes one of the film’s most memorable sequences.”

The Batman is still barreling through its theatrical run with perhaps the darkest, most brutal take on DC Comics’ legendary Caped Crusader yet. Channeling grim, R-rated grindhouse fare of the ‘70s, the Matt Reeves’ reboot has been somewhat divisive to audiences yet is nearing an impressive $712 million global take at the box office since it arrived on March 4.

Reeves (Cloverfield, War for the Planet of the Apes) has steered unapologetically into the disturbing underbelly of Gotham to produce a film that demands attention and provides a punishing showcase for the talents of the movie’s cowled, scowling star Robert Pattinson.

The Art of The Batman is a 224-page companion hardcover that tips the scales at over three pounds. It’s armed with a superb selection of behind-the-scenes stills, rare conceptual paintings, never-seen storyboards, on-set shots, costume designs, vehicle sketches, and an array of puzzling riddles. Also included are revealing interviews with key members of the cast and crew.

“As Production Liaison for The Batman, I was working closely with the filmmakers, artists, production heads of departments, and the digital asset manager to collate reference materials,” Field tells Inverse. “So by the time The Art of The Batman came about I had a good understanding of what artwork and photography was available. With so much great stuff to choose from, my task was to develop a narrative that would marry behind-the-scenes stories with the beautiful materials, to take readers on the journey of how this vision was brought to life.”

Warner Bros.
“Glyn Dillon’s take on the Batsuit combines iconic elements of the costume with what it would make sense for a grounded vigilante to wear.”Warner Bros.

For Field, both director Matt Reeves and producer Dylan Clark were brilliant collaborators, and he found them very generous in talking him through their experiences of making the film with honesty and passion.

“It was the little tidbits that I loved - like the inspiration of Stephen King’s Christine on the Batmobile, or the specific comics that informed this incarnation of Batman,” Field adds. “Having not seen Colin Farrell’s transformation into the Penguin in person, I found it particularly fascinating to learn more about the choices and physical process behind that.”

As a huge Batman fan for as long as he can remember, Field’s younger self would sit drawing his own Burton-era Batman film posters while imagining ideas for new Batman stories. He can trace his obsession from the comics to the Animated Series through the Christopher Nolan movies and the Arkham video games.

“When I look back at which Batman touchpoints have resonated with me, the stories and aesthetics continue to evolve and change, but the best incarnations of the character have maintained a stable core of what Batman believes in and does best, which makes him such a timeless, enduring character,” Field says. “Having spent the last couple of years working in Batman’s world, I feel so lucky to have written and compiled a book that not only hopefully reflects my life-long love of the character, but one that tells the story of the hard work and incredible talent that has gone into creating The Batman.”

The Batman is in theaters now. The Art of The Batman releases on April 19.