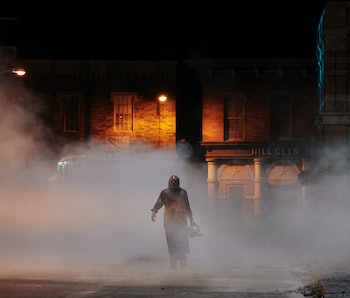 When Netflix revives an iconic franchise, it’s only fair to wonder what’s going to happen next. A sequel to the 1974 horror classic, Texas Chainsaw Massacre follows a group of young hopefuls on a mission to cultivate a thriving community far away from the damage of the big city. But their goal of gentrifying this small Texas town turns into a fight for survival as the legendary killer, Leatherface, resurfaces to stop their takeover.

After Mama is evicted from the orphanage she runs and then dies, Leatherface returns and wants revenge on the gentrifiers who illegally kicked her out. Unfortunately, Leatherface’s only way of coping with these perceived threats is by tearing them apart.

This Texas Chainsaw Massacre is a quick-paced cavalcade of violence that is sure to keep fans talking. It also brings back the franchise’s original final girl, Sally Hardesty (Olwen Fouéré), who, too, is bent on revenge. But will it sustain enough interest for another sequel to be put in the works? Director David Blue Garcia (Tejano) and producer Fede Alvarez (Evil Dead) spoke with Inverse about the film’s ending, where this installment falls in the franchise’s canon, and what it means for the future of Leatherface.

Lila (Elsie Fisher), who survived a school shooting that left many of her friends dead, has similar scars to Sally Hardesty — and none of them are completely healed.

The film’s final act sees Sally shoot Leatherface and stab him in the gut. His rebuttal comes with a chainsaw as he puts it through her torso. Lila’s sister Melody (Sarah Yarkin) tries to ram him with Sally’s truck but crashes instead. She frantically pleas with Lila to run. Preparing for her own chainsaw fate, Melody tearfully apologizes to Leatherface for “what we did to your Mama.”

So when the ending shows Lila holding a gun, it sends an array of messages to the audience. She’s a victim of a shooting and has been thoroughly traumatized by gun violence. Yet, here she appears with a semi-automatic weapon in her hands, ready to take down Leatherface, who has been murdering her friends. When she pulls the trigger, though, it doesn’t go off. Now, with Leatherface hot on her trail, she’s left to run away once again.

Thanks to Sally's final Hail Mary move, who gets him with two more shotgun bullets, the monster bails into a rundown movie theater. Lila takes the weapon, and Sally dies, officially passing the final girl torch to Lila.

A haphazard scuffle transpires, which almost drowns Lila. As Leatherface tosses the chainsaw at her ankle, Melody jumps on his back to distract him. Lila makes it to the shotgun and successfully fires off a round, which shoots the chainsaw out of his hands. A bullet hits him square in the chest, and Melody comes in with the finishing move. Armed with his revved-up chainsaw, she pummels Leatherface in the jaw, delivering a potential death blow as he fell backward into the pool and slowly sank.

Lest we forget, this is a slasher movie, and there are slasher movie rules to abide by. He may have been shot four times, stabbed in the gut with a hunting knife, knocked out by his chainsaw, and left to drown, but Leatherface is a hard man to kill.

After the girls share a brief reprieve, Leatherface pops out of nowhere to smash the window and take Melody. Unable to stop the car, Lila watches from the sunroof as her sister’s head is cut clean off. Crying hysterically, she’s motored away in an end sequence that mirrors the tearful escape Sally Hardesty experienced five decades prior.

“That was always the plan,” David Blue Garcia tells Inverse. “Those two end sequences were always in the script. We didn't reshoot that ending at all.”

It’s a jarring way to end the movie, to be sure. The audience gets the satisfying slasher face-off, punctuated with a surprising twist leaving Lila in an empowered yet extremely damaged position. Just as she begins to deal with her trauma and heal, a new source of grief takes its place.

Are the other Texas Chainsaw Massacre movies canon?

Texas Chainsaw Massacre being a direct sequel to the 1974 film raises questions. After five decades of waiting, Sally Hardesty returns and tracks down Leatherface. But pride ends up being Sally’s undoing as she is surprised that Leatherface doesn't remember her after all this time.

It’s worth pointing out that he’s in his 70s now, and a lot of murders could have potentially happened over the decades. If you consider the seven other Texas Chainsaw Massacre sequels to be canon, his foggy memory makes sense.

“There's a photo that shows him quite young in the orphanage,” Fede Álvarez says. “So you can believe he went there to hide after the crime scene from the first film. Maybe he was pulled out of there by the family, did some other bullshit, and then went back to the home. Maybe he was in and out throughout the years and then finally settled there. That's the way I want to see it because that's the way it makes me believe all the sequels connect to the first one in the franchise.”

By being a direct sequel, Texas Chainsaw Massacre doesn’t entirely erase what came before it. It simply adds a new thread to an expanding horror franchise.

Texas Chainsaw Massacre post-credits scene: Will there be a sequel?

A quick end-credits scene shows Leatherface ambling down a country road to his childhood home. The place where the atrocities of the first film took place. The story comes full circle, indeed.

Does this mean a sequel is in the works? This is the ninth installment in the franchise, and there’s always the potential for more. At the end of the day, though, it all depends on the fans.

“We'll be here waiting for the call,” Fede Álvarez says. “We have ideas for a way to take it. You got to go crazy with something like this; you have to be unconventional. You cannot just do a standard sequel because that's usually when they suffer. But we'll see. It's really up to the audience. If they show up, there'll be more.”