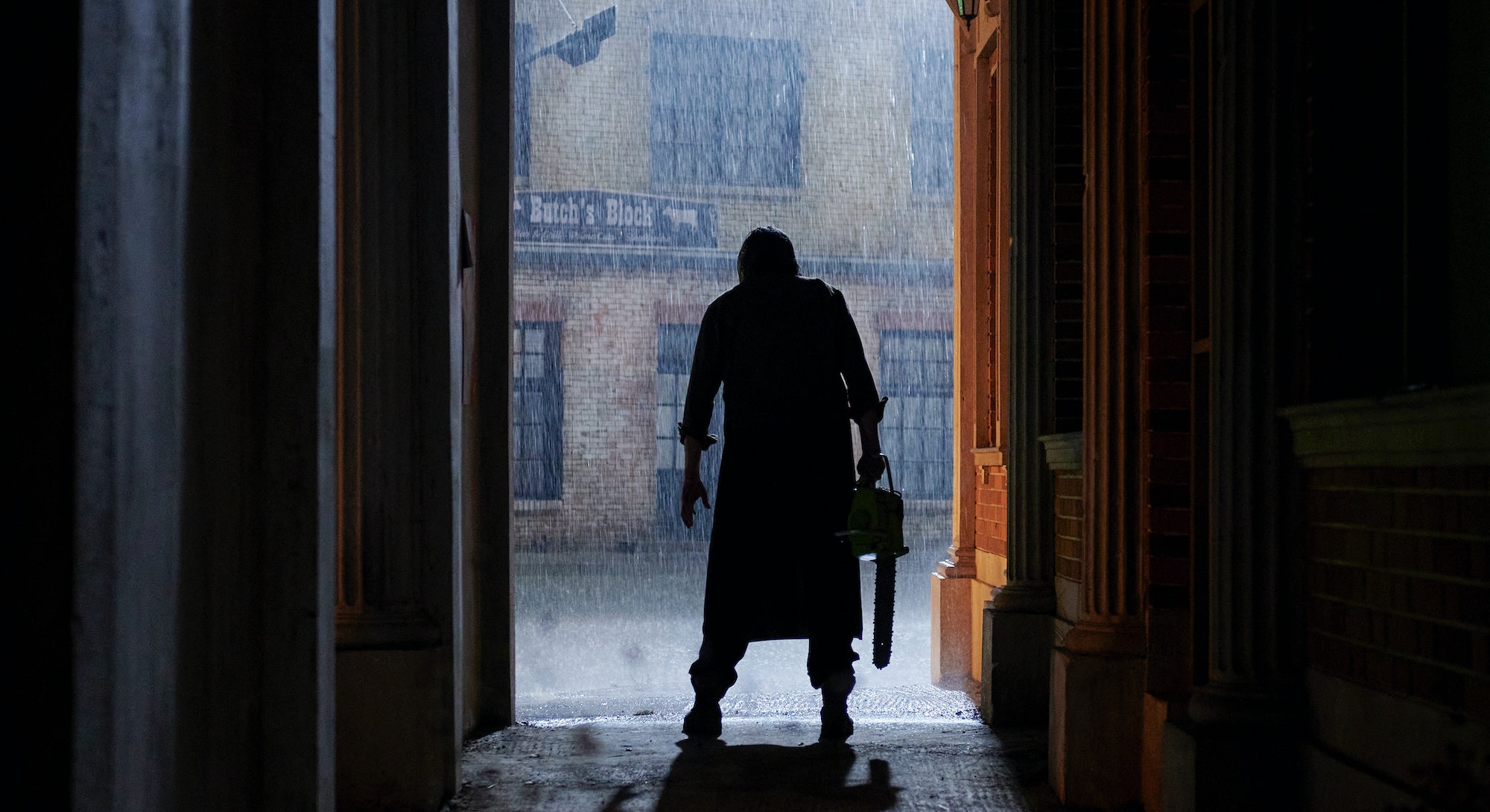 What is the man behind 2013’s Evil Dead and sleeper hit Don’t Breathe talking about? Netflix’s upcoming Texas Chainsaw Massacre sequel, of course.

Álvarez produced the project — with David Blue Garcia (Tejano) taking the director’s chair — and under his ultraviolent guidance, the creative team has finally done what seven previous sequels failed to do. They put the massacre back in Texas Chainsaw Massacre.

Álvarez describes his approach to the cult horror classic simply.

“When you’re going through flesh, you just want to destroy it,” he tells Inverse.

Using a narrative structure similar to the first movie, this Texas Chainsaw Massacre sees a group of idealistic young people take a road trip to Harlow, a deserted Texas town. Their plan is to gentrify the place into a thriving locale of peace and prosperity, but it turns out the best antidote to gentrification is Leatherface, who comes out of hiding (played impeccably by franchise newcomer Mark Burnham) to do what he does best: murder young people.

In the process, this Netflix sequel might just be the thing to bring Texas Chainsaw Massacre’s incoherent saga back into the mainstream and make Leatherface relevant once again.

Audiences have returned time and again to the Texas Chainsaw Massacre franchise, with each new sequel adding another layer to the Leatherface mythos. This latest installment is billed as the direct sequel to the 1974 original, the one that put director Tobe Hooper on the map and changed horror movies forever. Considering all the narrative ground that’s been covered, we have to wonder: Does this mean that none of the other sequels are canon?

“This one obviously takes the shape, a little bit, like Halloween,” Álvarez says. “It's really hard, though, as there's no one coherent franchise storyline for Texas Chainsaw Massacre. You can watch them all, and it's going to feel like it's returned to itself many times.”

“There’s no one coherent franchise storyline for Texas Chainsaw Massacre.”

Aside from the narrative similarities of bringing the original survivor back to face her memories, there are some deeper thematic connections at work here.

“Sally Hardesty is important to bring back because you're trying to pay homage to the original, and you're trying to pass the story along to a new generation,” director David Blue Garcia tells Inverse. “So it's really nice to have that transitional character that spans both films and connects them. We do it so that fans of the original will have something to look forward to and so that Sally herself can pass the torch to the next generation of characters.”

The first film, following Hardesty and her friends as they fled the brutality of big city life, was an allegory for the Vietnam War. It reminded us that violence is human and can be found all around us, even in America’s quieter and supposedly quaint rural getaways.

“We needed to update that story to what's going on today,” Garcia says. “One of the most prevalent forms of domestic violence that we have, unfortunately, is school shootings. And a lot of young people have been affected by this. And so that's why these characters are traumatized by it. That's the backstory.”

“We needed to update that story to what's going on today.”

Much like Hardesty’s journey to face her trauma, Elsie Fisher’s Lila struggles in reconciling her own. As the survivor of a school shooting, she’s challenged by an innate fear of guns and has to reckon with the defensive power they can represent when backed into a corner.

Gun violence is just one of the hot-button issues packed into the movie’s 83-minute runtime, with racial profiling and intolerance also on the docket. But instead of offering solutions, the movie takes a chainsaw to all of it, leaving viewers to make up their own minds.

“We're not trying to be preachy about it,” Álvarez says.

The producer and his writing partner Rodo Sayagues moved to America from their native Uruguay after their reboot of Evil Dead made waves in 2013. While the duo has lived in the States for nearly a decade, Álvarez maintains an outsider’s perspective.

“We're shocked every day about how things work in America,” he says. “So, at some point, it'd be how the original Texas Chainsaw Massacre was: It is a little bit of a charade. It's a parody, a satire.”

There are elements throughout the new film that are uncomfortably funny and frightening, sometimes simultaneously. Texas Chainsaw Massacre isn’t here to teach lessons but to offer up a bloody reflection of our own screaming societal ills.

“What we're really trying to show here is the endless cycle of violence in a world that is divided,” Álvarez says. “Leatherface, for me, represents that. He represents hate and intolerance, and he's going to go and kill everybody that gets on the side that is against him. He's a symbol of that hate, anger, and fear.”

How do you portray such unhinged vitriol in a Texas Chainsaw Massacre movie? Leave audiences with a massacre of epic proportions. One of the catalysts of Leatherface’s re-emergence is the arrival of some bussed-in out-of-towners, who flock to this Texan ghost town to view the landscape and potentially participate in its re-design. And once Leatherface is unleashed, it’s only a matter of time before the tour group comes face-to-mask with the iconic killer and one character warns him, “Try anything, and you’re canceled, bro.”

It’s a chaotic, brutal, and bloody centerpiece, which you can catch glimpses of in the trailer. Álvarez and Garcia explain that the scene almost didn’t happen.

“The funny thing is it was not in the script, originally,” Álvarez reveals. “I was in pre-production and was saying, ‘Guys, we need to earn the Massacre title on this movie.’ Unfortunately, what worked in the first movie doesn't count as a massacre anymore. That's where the bus scene came in. I think they were originally going to get away. And then we decided, ‘Man, no one's gonna get saved!’”

“We need to earn the Massacre title on this movie.”

The making of the original Texas Chainsaw Massacre is the stuff of legend, featuring tales of actors who hadn’t washed or changed in days working while cattle offal was strewn about the set to bake in the triple-digit heat and cultivate a putrid atmosphere.

Moviemaking has changed a lot since then, but the team behind Netflix’s newest terror title worked tirelessly to maintain an old-school practical aesthetic. Leatherface’s new mask was hand-molded with clay, and the cast and crew got way more than their hands dirty.

“Everything that is a nightmare for filmmakers tends to be a dream for audiences, which especially goes for horror fans,” Álvarez continues. “The more you suffer, the more they enjoy the experience of watching the suffering.”

The chainsaw is still the law

To really drive home the film’s visceral nature, the crew used amputees to depict victims of dismemberment. Meanwhile, the cast wore the same slopped-up wardrobe for days while four special effects specialists shot gallons of fake blood from tanks as they hid in the corners of the set.

“You’re going to give me PTSD,” Garcia says with a laugh, explaining the shooting process. “Leatherface would be going through with a chainsaw, people are scrambling around, and they're just spraying blood in the air. It was raining blood from the roof and everybody was covered. After one take of that, I'd have to clear the set and bring in a team to mop up all the blood because you couldn't stand, it was so slippery after each take.”

If that sounds like a lot, Garcia says, “Fede was always pushing for more.”

“The first day I was on set, I had to kill off one of the characters,” he says. “Fede saw the dailies, and he called me the next day, and goes, ‘Hey, good job on the kill, but you need to do it again. I want you to re-film it, and I need you to go bigger. I need you to go with more blood. And then when you think you've got enough blood, you need to put more.’”

Apparently, the number one rule in Fede Álvarez’s book is that too much blood is never enough.

“I mean, have you seen his movies?” Garcia says. “Once I got that message, it was just so much fun to come up with all these crazy kills.”

Fun is what it comes down to at the end of the day. Black Christmas may have laid the groundwork for pop culture’s fascination with the slasher movie, but it was Texas Chainsaw Massacre that kicked the floodgates open. Could this sequel be the spark fans have been hoping will re-ignite the franchise?

Alvarez and Garcia admit they’ve tossed around some “fun ideas” for another movie if Netflix comes calling. That’s all speculative, but something tells us this isn’t the last time we’ll hear that chainsaw buzz.