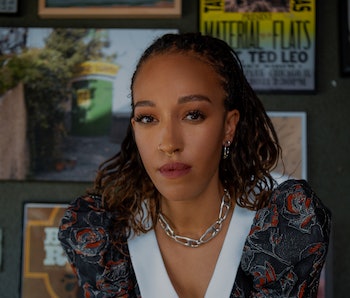 Although the crossover between two Star Trek shows — Strange New Worlds and Lower Decks — won’t drop until sometime in 2023, behind the scenes, those worlds have already collided. “I broke a lot of things,” actress Tawny Newsome tells Inverse. “I kept flipping switches because I believed everything was real. But sometimes it’s just cardboard or plywood... I was so giddy.”

Although it was a brand-new and very risky Star Trek show back in 2020, the lighter, self-reflective tone of Lower Decks is suddenly all over the Trek franchise. In fact, if some fans detect a bit of Lower Decks flavor in Strange New World right now, there’s a reason for that. Lower Decks showrunner McMahan tells Inverse that he “punched up” a few of the scripts for Strange New Worlds, including “Spock Amok.”

Still, Newsome is quick to point out that none of the current Trek renaissance would be happening if it weren’t for Star Trek: Discovery back in 2017. “That’s like our modern mother, you know?” Newsome says. “That created the blueprint. But, I do think Lower Decks could have primed people a bit for Prodigy. I do think there’s a baton-passing every time a new Star Trek series comes out. For that moment, we all get to be the best one.”

As a massive fan of all versions of Star Trek, Newsome admits that making the switch from animated to live-action Star Trek for the upcoming Strange New Worlds crossover was the fulfillment of a lifelong dream.

“I was so excited to go to work every day,” Newsome says. “I was like bursting out of my skin to get to work with Jonathan Frakes. Everyone knows I'm a big Star Trek fan, and my good friend Jack [Quaid], put his hand on my shoulder the first day of filming and said, ‘How is this for you? This is pretty great. Right?’ I was grinning from ear to ear.”

To be clear, the upcoming crossover will somehow feature Boimler (Quaid) and Mariner (Newsome) crossing over from their animated series to the live-action series of Strange New Worlds. Fans have been hoping for a long time that some sort of live-action Lower Decks could happen, and Newsome even teased earlier this year that she was “on the case.” Now, it’s coming!

Newsome confirms she and Jack Quaid were in uniform for the filming, something which Quaid echoed in an interview with Entertainment Weekly. Exactly how Boimler and Mariner will cross not only time periods but also animated forms is unclear so far, and Newsome isn't about to spoil any of it. All she will reveal is that the behind-the-scenes action might be as good as whatever was actually filmed.

“I was kind of never out of character,” Newsome says of the Strange New Worlds experience. “Chrissy Chong and I went out to a pizza restaurant at one point and were dancing on tables. I had an instant bond with Celia [Rose Gooding] and we had so much Gatorade at one point that we were just spinning around on chairs, just high on sugar. The world needs to see all the behind-the-scenes stuff from that shoot.”

Since 2020, Tawny Newsome has spearheaded a very unique kind of Star Trek series, one which focuses on character archetypes that have perhaps been mistreated or undervalued in other iterations of the franchise. By now, hardcore fans know the pitch for Star Trek: Lower Decks; it’s a series that follows the misadventures of Starfleet’s underdogs, the low-ranking Ensigns who often do the dirty work, serving on a starship, the USS Cerritos, that is very much not the flagship of Starfleet.

“It’s a celebration of the hyper-competent but under-celebrated,” Newsome explains. “Starfleet is the best of the best. But what if you’re not part of that upper echelon? What if you’re just the best?” This is to say that Lower Decks isn’t really about lovable losers but, instead, an honest and forgiving look at what life would be like for extremely relatable people who just happen to live in Star Trek’s aspirational future.

In the premiere of Season 3, the lower deckers engage in the daring planned rescue of Captain Freeman, only to learn that a much more component and complex plan was happening all along — knowledge of it was simply above their pay grade. Newsome hopes this kind of down-to-Earth take on space adventures might be a balm for audience members feeling burnt-out from trying too damn hard.

“I think the last two years have been really hard,” Newsome says. “Suddenly, a lot of people have gone into like a hyperdrive: I need to finish my script, or workout, or turn myself into a new person. I just think about that pressure for me, personally. That can be damaging when it’s not moderated. If our show can let some people relax a little bit, and just be the best that they are and not the best of the best, I think that would be a huge win.”