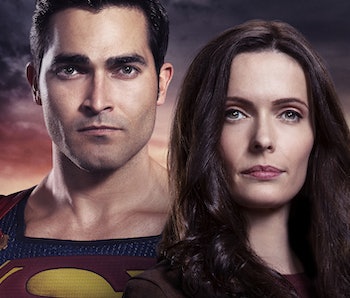 It's a new live-action Superman series, and it's coming to your TV screens faster than a speeding bullet.

After years of rumors that started in 2016, DC and The CW announced in late 2019 a new Superman TV series. The show, titled Superman & Lois, will star Tyler Hoechlin (who first played the Man of Steel in the CW series Supergirl) and Elizabeth Tulloch as reporter Lois Lane.

Both Hoechlin and Tulloch's characters originate from The CWVerse (formerly known as the Arrowverse), the shared universe of DC Comics media that includes shows like Arrow, The Flash, Supergirl, Black Lightning, and more.

Here's everything we know so far about the new series, Superman & Lois. Bookmark this page and come back often, as we'll update the page with trailers, plot details, casting announcements, and more when they're made available.

When is the release date of Superman & Lois on The CW?

The date was announced on October 29, 2020 on the show's official social media. The release date was bumped up by a month from an original release window of "January 2021."

What is Superman & Lois?

Superman & Lois is a new 13-episode TV series about the DC Comics icon, Superman, and his married life with renowned Daily Planet reporter Lois Lane. It is a spin-off of the TV series Supergirl, which stars Melissa Benoist as Kara Zor-El/Supergirl, the cousin of Superman.

While the coronavirus pandemic has forced many TV productions to pause, Supergirl is expected to air its sixth and final season in mid-2021.

Will Superman & Lois stream on Netflix?

A likely scenario will be that Superman & Lois will stream on HBO Max, where other DC shows like Batwoman, Doom Patrol, and Harley Quinn are currently streaming.

As of January 2021, there is no known streaming home for Superman & Lois other than The CW's main website, which will stream episodes with commercials after they air.

Is there a Superman & Lois trailer?

Yes! A trailer was released online on January 21, 2021. You can watch the trailer in the embed below.

What is the plot of Superman & Lois?

The primary plot of Superman & Lois involves Superman and Lois Lane raising their two teenage sons, Jonathan and Jordan Kent, in Superman's hometown of Smallville. As Jonathan and Jordan discover their Kryptonian superpowers, Clark Kent will have to raise his boys as both Clark and Superman, all while keeping Earth safe from alien threats.

How is Superman & Lois a different show from other Superman TV shows?

Unlike other Superman shows, like Superboy and Smallville, the series will not be an origin story nor a young adult drama about the teenage years of Clark Kent. Instead, evocative of the 1990s soap series Lois & Clark that starred Dean Cain and Teri Hatcher, Superman & Lois will have an older, experienced Superman in his adulthood.

Showrunner Todd Helbing said the show aims to tell a "grounded" story about adulthood. Helbing also revealed that sons Jonathan and Jordan will have their own superpowers.

"Speaking from experience, my boys are wildly different," Helbing said, "So we wanted to present two kids with different skill sets and how do you deal with that as parents."

Helbing also said that the re-mapping of the multiverse (after "Crisis on Infinite Earths") allowed the producers to have a "blank slate," which led to aging Jonathan Kent — introduced as an infant in the special — into a teenager. The show will also introduce Jordan Kent, Jon's twin brother and a new character invented for the series.

"I came from a small town in the Midwest and the town I grew up in had a business leave and sort of affected everyone in the town," Helbing said. "The town slowly started to dry up. It felt very current with recent years after [the financial crisis of] 2008. We wanted to tell the story where you have these two parents who, after this tragic event happens, move back to Smallville and find that it's easier to raise kids maybe in a place where life isn't so hectic as it is in Metropolis."

One of the biggest news revealed at DC FanDome in summer 2020 is that Tyler Hoechlin's Superman will wear a new costume, one that's different from the costume he's worn in shows like Supergirl.

“Originally [Tyler Hoechlin] came on for the crossovers and that suit wasn’t built to sustain a series. And I think in just everything that we were talking about, we have a fresh slate,” Helbing said. “There’s going to be a really badass Superman suit in this show that we’re pretty excited about.”

In late 2020, the costume was revealed, which confirmed design inspiration from the New 52 era of Superman's comic books.

Will Superman & Lois have a crossover with other DC shows?

Probably! The Covid-19 pandemic has made television productions more difficult than usual and the producers of the CWverse have mostly ruled out a crossover for the time being.

But Superman & Lois will share continuity with the DC shows Supergirl, The Flash, Black Lightning, Legends of Tomorrow, and Batwoman. That leaves room open for a crossover should the powers that be (and the end of a pandemic) make it so.

Who stars in the cast of Superman & Lois?

The cast for Superman & Lois includes:

What Superman comics should I read?

Because of the inclusion of Jonathan Kent, it is easy to read just a few select Superman comics that feature the character and the premise of a married Superman and Lois Lane.

This article was originally published on June 24, 2020