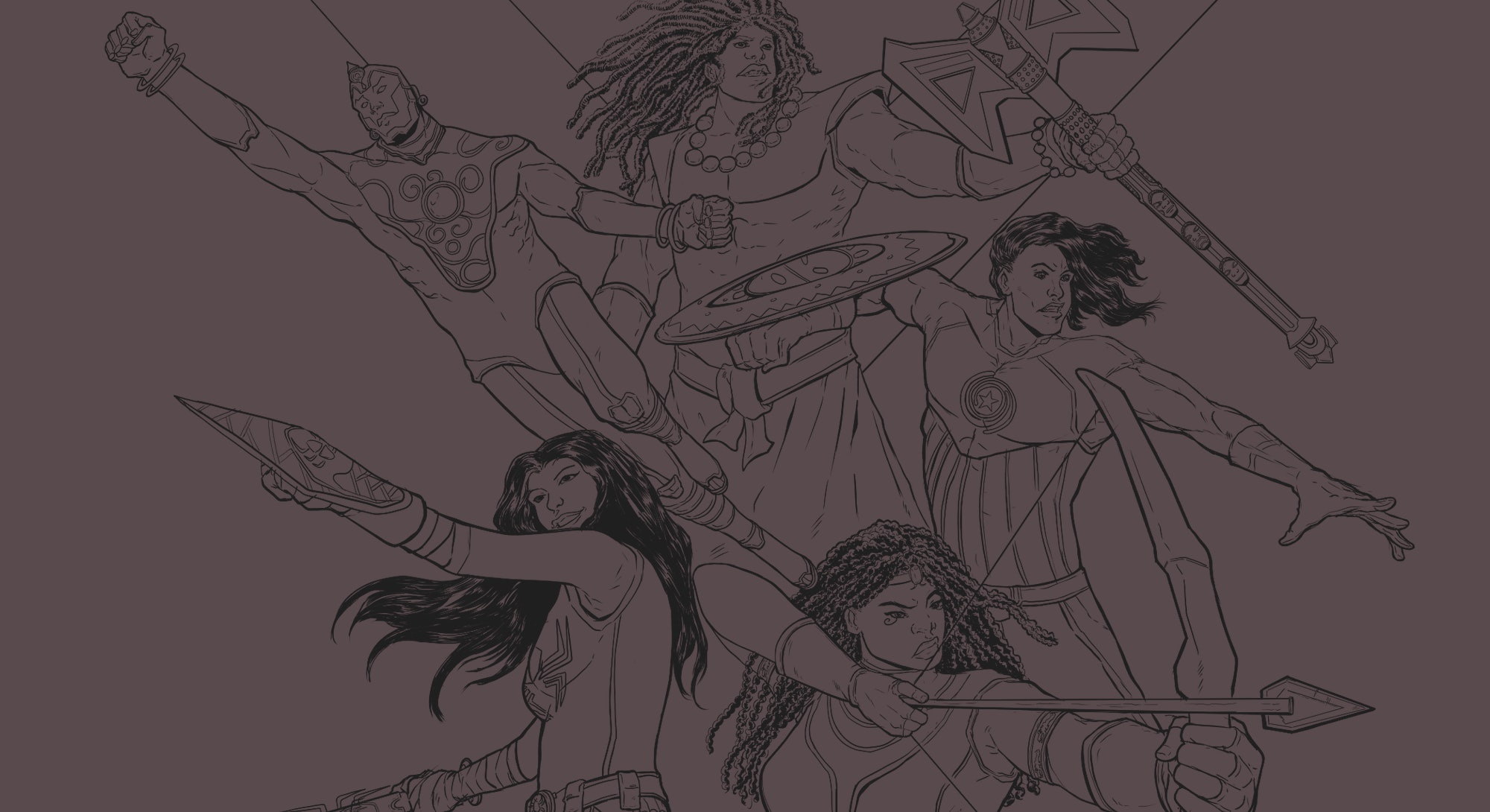 What if the Avengers weren’t just a bunch of white guys running around in tights?

That’s the question at the heart of Inverse’s 2021 Superhero Issue, which sets out to challenge the concept of superheroism itself by focusing on the types of people and characters too often forced to exist in the margins of comic book pages.

It’s also the question we posed directly to Takeia Marie, the artist behind many of the original illustrations featured in this issue.

“There are a lot of different cultures and mythologies that we don’t pull from because we’re not aware of them,” Marie tells Inverse.

In fairness, superheroes have come a long way since their extremely homogenous early days. But Marvel Studios still felt the need to launch its cinematic universe with white guys (and one woman) before expanding its roster to feature non-white characters like Sam Wilson, Black Panther, and Shang-Chi.

When Marie set out to create a more diverse superhero team, she looked to the original Avengers movie lineup for inspiration. Each member of her alternate Avengers lineup draws from the culture and mythology of an overlooked area of the world, from Captain America (now a Caribbean hero adorned in Puerto Rican symbols) to Shango (the Yoruba god of thunder, standing in for his Norse cousin Thor).

“One of the biggest things I wanted to avoid doing was race swapping,” says Marie. “I didn’t want to have ‘the same hero, but a different race.’ I wanted to incorporate things that made sense culturally.”

Marie adds: “I also wanted to avoid appropriating, so I incorporated things from the actual culture into the heroes I drew.”

With that in mind, here’s a quick rundown of the new Avengers, in the words of illustrator Takiea Marie.

“I wanted to mix Puerto Rican heritage with Taíno culture. I used the Sun symbol in his shield and other motifs I saw throughout different shrines and [objects] from their culture. I made his costume reminiscent of the Puerto Rican flag to tie Puerto Rico’s culture in with the Taíno culture, which was prevalent in many different Caribbean islands.”

“I wanted to make a point of showing that Captain America doesn’t necessarily have to be a white guy. We’re all American. Puerto Rico has a lot of heritage that is overlooked, and a lot of ties to America that are overlooked.”

“For Thor, I went with Shango, the Yoruba god of thunder. His colors are red and white, so I incorporated that into the illustration. And he wields an ax.”

“I found out there’s an Indian story where Buddha had guardians that were robots. There was a king, Ajatashatru; after the Buddha passed away, he was charged with guarding his remains. In some versions of the story, these guards were robotic guardians based on Vishwakarma, the Hindu god of engineering or architecture.”

“In some versions of the story, Vishwakarma was the one who created them. So I looked at his motifs. I saw these cool patterns on some images of him. I incorporated them into the robot’s chest.”

“Spiders are lucky in China. They’re called ‘ximu’ and are considered a symbol of wealth, luck, and prosperity. So I thought of Black Widow.”

“I looked up the Chinese colors for luck, and I found out that they were green, yellow, and red. So I incorporated green and yellow into the character’s design, then I looked up some ancient Chinese daggers and decided to give her those weapons. Originally, she had guns. But spiders were supposed to be lucky, so I had to change that.”

“Neith, from Egyptian culture, is a goddess of creation. Sometimes, she’s depicted as having a bow and arrows. So I thought, ‘Hawkeye, perfect.’”

“I looked into that a little bit more, and I found a crocodile sometimes represents Neith. There was something in her mythology where she has two sons who are crocodiles. So I put the crocodiles on her armband and incorporated that into her design.”

Describing her approach to the Superhero Issue as a whole, Marie added: “I just took different bits and pieces from different [cultural figures] and tried to make something new — that also represented the cultures that they came from.”