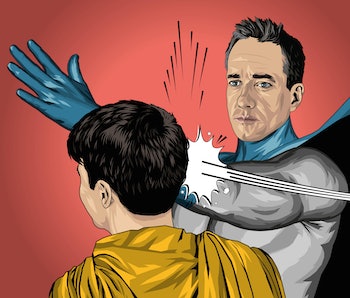 It’s hard to see yourself in Succession. Because all the characters are ultra-rich members of the 1%, they exist in a world beyond relatability. Sure, in the beginning, Greg served as an audience surrogate, but now he’s playing both sides of the Kendall/Logan divide and ranking his favorite bottles of $1000 champagne.

In Succession Season 3, the only character the public can relate to is... the public. Public relations is now the name of the game, especially in Episode 3, “The Disruption.” It may seem like a huge storytelling flaw to not have any “normal” characters anymore, but it’s actually something superhero stories have done since the start. Here’s how it works.

The Roy Family Super Squad — Calling the Roys superheroes may be a bridge too far, but their superpower is one that exists both in comics and in real life: a seemingly unlimited amount of money. Each character on Succession is their own Bruce Wayne or Tony Stark, fighting what they assume are the evils in their life. However, as much as money makes the Roys super, it also makes them distant from the views of the everyman.

In Episode 3, Public Relations goes from a minor inconvenience (something Greg clumsily monitored on the way to Rava’s house) to the weapon of choice for both Shiv and Kendall.

Kendall decides now he is a member of the public, not above laughing at himself when he’s skewered in political late-night shows. In fact, he’s so desperate to show he’s cool that he volunteers to appear on the show. He wants to be the Roy of the people. Meanwhile, Shiv releases an open letter about her “concern” for Kendall’s wellbeing, weaponizing the public against him.

In the Marvel Cinematic Universe, public relations is an underappreciated part of the superhero lifestyle. When Tony Stark reveals his true identity at a press conference in Iron Man (2008), the tenuous relationship between the Avengers and the public is always churning in the background.

There’s no better example of this than The Falcon and the Winter Soldier. John Walker is glorified for the cameras, while the Flag-Smashers are bashed as terrorists in the media (which, fair) even when their main goal is to protect the needy.

Real people like you and me will never have Super Soldier Serum-level powers, so it’s difficult to see ourselves in the Avengers. However, how those characters relate to the public is how they would relate to us. We may not get our own museum exhibits, but maybe we’d be invited to Sam Wilson’s cookout.

The same concept applies to Succession. We’d never be able to afford Greg’s timepiece, but we could imagine ourselves in the audience laughing at Ziwe calling Kendall “Oedipussy.”

However, there’s one moment we can all relate to characters, no matter how grand they are: at their lowest. Despite all Kendall’s grandstanding, it’s hard not to feel for him when he breaks down, hiding from his big TV appearance knowing he’ll have to deal with the effects of Shiv’s letter.

Breaking a Few Greggs — The biggest example of how public relations figures into Succession is the curious case of Tom and Greg. After a Thanksgiving shredding session, further document burning, and an embarrassing Congress hearing, Tom and Greg, despite neither technically being Roys, represent the alpha and the omega of how to deal with the public.

For Greg, he’s not a public figure, nor does he want to be. He’s very happy as a sidekick, the Robin to Tom’s Batman, as long as he’s able to get through corporate life unscathed.

All the scathing is ending up on Tom’s end, the guilty-looking face of the Cruises scandal. He knows he’s going down, and at this point he’s willing to drag anyone down with him. That’s why, in Episode 3, he puts Greg in a terrible office and even offers him a fake “cyanide pill.”

In the world of superpowered corporate elite, Tom is about to pull a Tony Stark and sacrifice himself at the altar of political ire (and maybe some prison time). But he’s not above using Greg’s naïveté against him to split the bad PR between the two of them.

However, Greg has learned a thing or two in his years at Waystar Royco. He’s not going down without a fight. He’s been a witness to the PR machine of the Roy family and knows how the public is reacting to Kendall. He’s played Good Tweet, Bad Tweet.

For the first time in Succession history, Greg might actually be ready for what’s about to hit him.