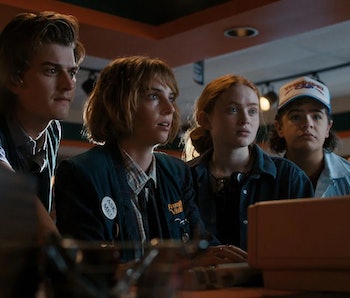 It’s been a while since Stranger Things Season 3 dropped on Netflix and gave us emotional whiplash after the Battle of Starcourt. With Season 4 just weeks away, the string of teaser trailers, hints, and images from Stranger Things hyped up fans and left them wanting more.

Based on all the details and teases Netflix has released so far, we did a little digging to see what might be in store for our favorite group of friends unlocking the mysteries of its universes. Here are five of the biggest questions we have about Season 4 and our theoretical answers as we speculate on what could go down in the Upside Down.

5. Will Strange Things Season 4 have a time jump?

Stranger Things creators, the Duffer Brothers, explained Season 4 would be split into two parts in a letter to fans, with Volume 1 releasing May 27 and Volume 2 on July 1. They said:

"With nine scripts, over eight hundred pages, almost two years of filming, thousands of visual effects shots, and a runtime nearly twice the length of any previous season, Stranger Things 4 was the most challenging season yet, but also the most rewarding one. Everyone involved is incredibly proud of the results, and we can’t wait to share it with you.”

While there’s no confirmation on how much time Season 4 will span, the fact that they are splitting the season into two parts could mean the show may jump an unknown amount of time during that break. And if not during the break, we can at least expect the new season to begin after a small (or big) time jump as the characters look a little older than when we last saw them in Season 3.

In addition, the Duffers also stated in their letter that Season 5 would be the last, so perhaps a jump in time will help hurtle the characters into the finale a little more smoothly.

Dr. Martin Brenner, the main scientist who experimented on Eleven when she was a child and who she refers to as “papa,” is alive. This isn’t a huge stretch since Matthew Modine is listed as a cast member for Season 4.

However, the last time we saw Dr. Brenner, he had presumably been murdered by the Demogorgon at the end of Season 1. But he met his demise off-screen, leaving room for him to return down the line.

And now Season 4’s episode titles seem to point to his return:

Specifically, the episode titled “Papa” will likely feature him heavily, and “The Massacre at Hawkins Lab” could take us back to when he was murdered and allow us to follow his movements throughout Seasons 2 and 3. And speaking of father figures...

3. When will Hopper and Eleven reunite?

We didn’t mourn Jim Hopper for long until he was back in our lives. After he seemed to have perished with the closing of the Upside Down rift, a throw-away line about an American prisoner gave us hope he was still alive. Then, Netflix released the teaser trailer below, which shows Hopper working the railroad in a Russian prison camp. How he got there is still a mystery, but if there’s one thing we know for sure about Season 4, it’s going to be a big one for Hopper.

Speaking with Entertainment Weekly, David Harbour revealed that the boxes Eleven came across in Season 2 (the ones labeled “dad,” “Vietnam,” and “New York”) will come back into play in Season 4. With all this new backstory coming for Hopper, his reunion with Eleven might take a while.

However, in the Welcome to California teaser, Eleven is dragged by two shady men, which most likely means the questionable people who experimented on her are still hunting her down. With Hopper in the hands of the enemy, this could be how Hopper and Eleven reunite, as they both could potentially be used as leverage against the other.

In Season 2 of Stranger Things, Eleven met Kali, another kid with superpowers who was also experimented on at the Hawkins Laboratory. Kali’s number was 8, and she could create illusions and distort reality. After Eleven went back to Hawkins to save her friends, Kali and the other kids were never referenced again through Season 3. However, Season 4 could see their return.

In an interview with EW, The Duffer Brothers explained that Season 4 would venture outside of Hawkins more, allowing for more plot threads to have room to breathe. A Russian prison will be a significant location with Hopper there. Still, it could also mean bringing back the superpowered kids, especially since the Russians have a Demogorgon and the rift to The Upside Down may still be open. Eleven can’t exactly take care of those things now that she’s lost her powers, so bringing in the superpowered kids to pick up the slack makes sense.

One of the first teaser trailers for Stranger Things Season 4 takes us back to the 1950s as an unknown family moves into Creel House. The house in question belongs to a man named Victor Creel. Played by Robert Englund, Victor, in the present day, is at a psychiatric facility after murdering his family, as briefly glimpsed in the teaser trailer. It suggests the Upside Down is breaking through into the world, interfering with the electricity (as we’ve seen before in Season 1).

The teaser also features Steve, Dustin, Lucas, and Max breaking into an abandoned Creel House in the 1980s. Since everyone was present at the end of Season 3 when the rift was seemingly closed, perhaps their investigation into Creel House is because Nancy and Jonathan found something worth writing about again. Victor Creel could be a new source of information for the budding journalists who hope to seal off the Upside Down for good.

Many exciting (and terrifying) twists and turns await us in Stranger Things Season 4. We’ll need to be a tiny bit more patient to see how everything unfolds in these upcoming two new volumes.

More like this
Entertainment
Jan. 30, 2023
Doctor Who Could Become the New Marvel — But There's a Catch
By Ryan Britt
Culture
Feb. 2, 2023
Buck Rogers in the 25th Century’s Most Baffling Change Also Gave Us Its Best Character
By Ryan Britt
Culture
Jan. 26, 2023
29 years ago, one pivotal sci-fi series got a second chance
By Ryan Britt
LEARN SOMETHING NEW EVERY DAY.
Related Tags
Share: