The Rules of Time Travel

“I love a bit of non-linear storytelling.” 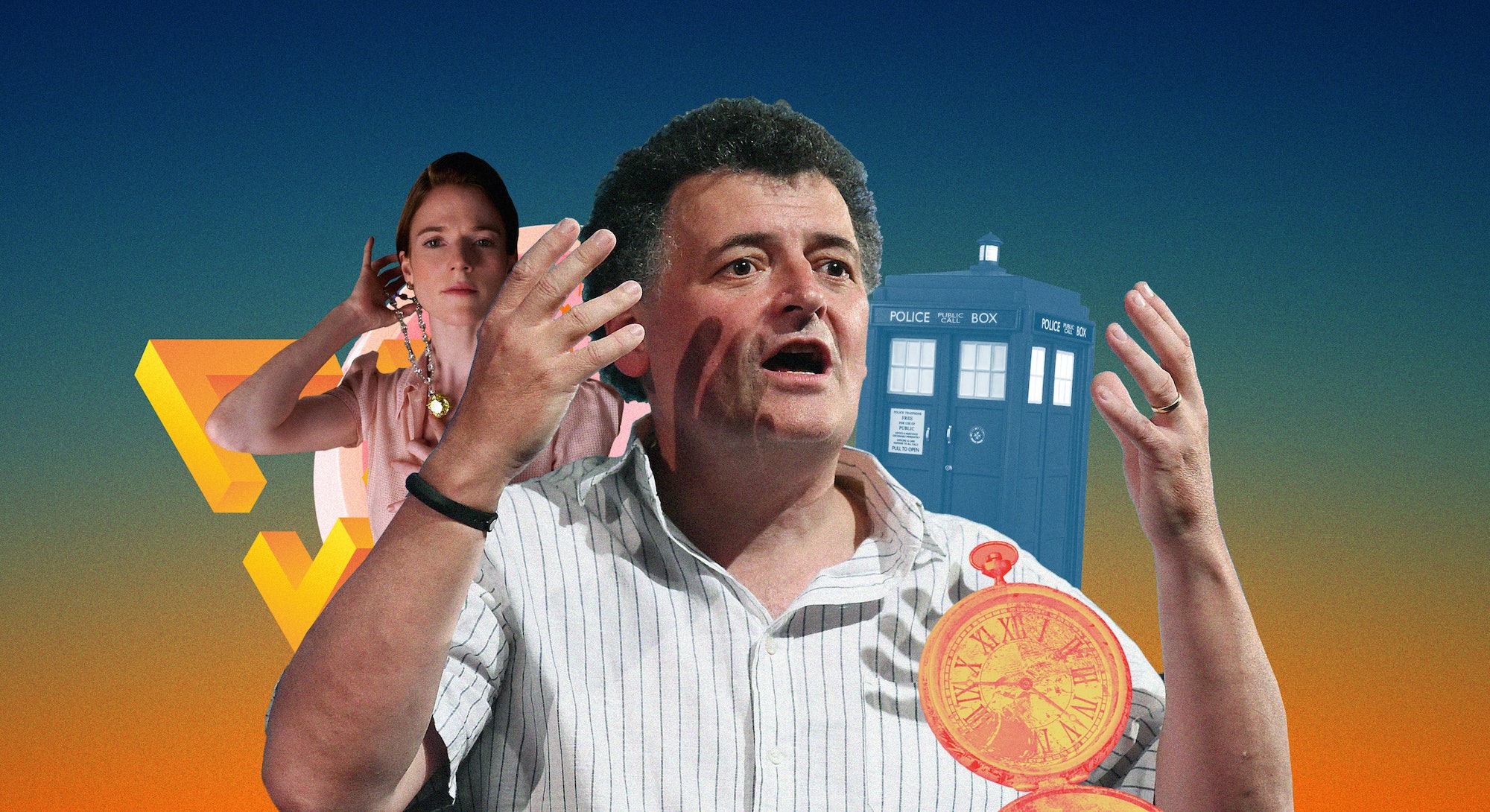 When Steven Moffat first began making a name for himself in television, he encountered a surprising type of criticism.

“People always used to ask me, ‘Why do you do out-of-sequence storytelling?’” Moffat tells Inverse. “And I'd always say to them, is your memory in the right order? When you think about yourself, do you go from being born to being 1 year old to 2 years old? No, it's a mad jumble. You wouldn't even know what the order was.”

“Even if I'm not writing about time travel,” he adds. “I love a bit of non-linear storytelling.”

“I can't help but make Steven Moffat projects, I'm doomed to that.”

In his latest project, The Time Traveler’s Wife for HBO Max, Moffat, 60, does indeed delve into time travel, but beyond his knack for creative storytelling, it can be hard to pin down a theme among Moffat’s work, which includes the sitcom Coupling, the modern mystery series Sherlock, and a long run as showrunner on Doctor Who (another time travel story).

So what makes a Steven Moffat project?

“The fact that I'm involved with it?” he says, laughing. “I mean, I dunno, I can't help but make Steven Moffat projects, I'm doomed to that — like an ancient curse whenever I do something.”

But as much as some fans might think of Moffat as the go-to guy for sci-fi and time travel, that’s actually not the themes he sees as connecting all of his work.

“I like comedy a lot,” he says. “I like comedy far more than someone who hasn't written one for a couple of decades should. I think that's fairly obvious from Doctor Who. I know I get in trouble every time I say it, but I'll just keep saying it: I think Sherlock isn't a detective show, I think it is a comedy about the detective.”

“I mean, when you see the show with a big audience, they're laughing all the time,” he adds. “It's the funny detective and his nutty best friend and strange brother and the world's worst supervillain.”

Another theme coursing through Moffat’s work? Love across space and time. This is on full display in The Time Traveler’s Wife, an adaptation of Audrey Niffenegger’s 2003 novel of the same name which Moffat borrowed from repeatedly in his work on Doctor Who.

“I suppose those are the things I quite often write about,” he says, pointing to two specific examples: the character River Song and the episode Girl in the Fireplace.

River Song, a quasi-love interest the Doctor keeps meeting out of order, mirrors the non-linear relationship between Clare and Henry in The Time Traveler’s Wife. Meanwhile, Girl in the Fireplace (an episode where time windows allow the Doctor to befriend a member of the French court throughout her life in the 1700s) was so heavily influenced by Niffenegger that she references it in her next book.

In other words, Moffat has, perhaps without realizing it, been practicing for this adaptation for over a decade. In a way, it’s Steven Moffat’s greatest hits album.

Love At The Office

The Time Traveler’s Wife is a story of Henry (Theo James) and Clare (Rose Leslie), who have a marriage unlike any other but still undergo the same hardships of trust, intimacy, and cooperation.

Moffat has firsthand experience with an atypical marriage: He’s worked with his wife, TV producer Sue Vertue, for most of his career. And although this project is also about a marriage, Vertue doesn’t see herself in The Time Traveler’s Wife.

“I don't think there’s much of our relationship in this apart from potentially me trying to get him interested in the wedding,” Vertue tells Inverse, chuckling at the memory. (She failed.) But though the thought of working so closely with the person you also “come home” to might seem like a lot of togetherness to some people, both Moffat and Vertue see it as a benefit to their relationship.

“We are working creatures,” says Moffat. “Roughly speaking, we think a good life is five days working and two days off.”

Vertue agrees, noting that her mother’s view was always: “Work hard but have fun doing it.” She adds that their writer-producer dynamic and work also makes life easier at home.

“If I say, ‘How’s your day been?’ he goes, ‘It’s been a bad day,’ I can understand what that means,” she says. “A lot of people have no clue what their husbands do.”

Keeping work and personal life intertwined might seem like a mistake, but the couple says it actually improves their work-life balance.

“I think it halves the amount of time you spend talking about your work because you already know,” says Moffat. “Work-life balance is that you enjoy your work, and therefore you don't mind if sometimes it intrudes into your life.”

Being married to Steven Moffat is one thing, but what about working for him. According to the cast of Time Traveler’s Wife, that’s not so bad either.

“There are so many people in Hollywood where you think, ‘Don't meet your heroes,’” says Kate Siegel, who portrays Henry’s mother Annette. “But Steven and his wife are inquisitive and creative and welcoming.”

Rose Leslie, who plays the show’s titular wife, Clare, says Moffat arrived on set just when he was needed most.

“When he was there, he brought an abundance of energy, joy, and enthusiasm,” Leslie tells Inverse. “It was a wonderful thing to have at the tail end of a filming schedule when we were all relatively knackered and needed a final kind of boost before we saw the finish line.”

But it tends to be Moffat’s words that bring actors to his projects.

“Whilst I was auditioning for it, I just adored his adaptation of the scenes,” Leslie says. “His writing is beautiful, and it's a joy for any actor to be able to speak his words.”

It was the same for series director David Nutter, best known for his work on Game of Thrones.

“From the first page I read, it just felt like I didn't need to prepare for it,” Nutter says. “I’d been preparing for it my whole career.”

Siegel thinks she knows why Moffat’s words resonate with actors and audiences.

“The stories they tell are ones that I'm excited to share with my children,” she says. “Stories about hope and stories about love and stories about overcoming difficulty and how the world can be a terrible place. But somehow we all find ourselves in it. So let's do the best we can.”

Everyone who’s involved with Moffat’s Time Traveler’s Wife found personal resonance in it, but Moffat is quick to deflect, praising the original story and its universal themes over his own contributions as writer and creator.

“So I kind of think time travel reflects the way we remember our own lives,” Moffatt says, “but it's also just exciting. I mean, the idea that you can reclaim yesterday, you can go back and see it again.”

Time Is A Flat Circle

For Moffat, this project is the culmination of all his favorite concepts rolled into one.

“I'm attracted to sort of high-concept stories,” he says. “If someone tells me, ‘This film, it's a bit of a puzzle box and it's all style over substance,’ I'm already watching the film before they finish the sentence.”

“I love twists and surprises. I love the feeling of being absolutely outplayed by the filmmaker or the writer,” he adds. “I think, ‘Wow, I did not see that coming,’ I love a tricky plot.”

The Time Traveler’s Wife juggles sci-fi, timelines, romance, drama, and comedy. It may just be the trickiest plot Moffat’s ever done — but he’s got just the team to handle it, including Nutter — the man who introduced complex characters in shows like Smallville, The Flash, and Supernatural — Siegel, Leslie, and Theo James.

But more than anything, this series feels like a love letter to marriage.

Adds Steven Moffat, “Leisure is only enjoyable if you've earned it.”