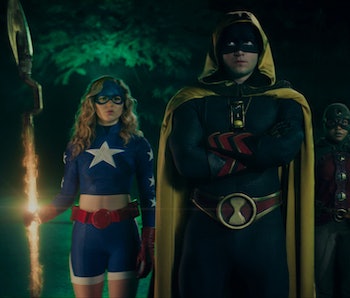 If Stargirl were a weaker show, it would be a heinous crime that it took six episodes — that's six long weeks — to finally form its central superhero team. But because Stargirl is a great show with a firm grasp on plot, story, and character progression, the arrival of the Justice Society comes at a logical and natural point in the story. But even though the timing is right, Stargirl doesn't quite hit the home run one might hope when it comes to superhero spectacle.

In its long-awaited moment of superheroes versus supervillains, Stargirl takes its inspiration from Marvel (not DC). In the process, the CW show does a few things right and one thing unfortunately wrong.

Warning! Minor spoilers for Stargirl Episode 06, "The Justice Society" ahead.

When a big hack takes place at a nearby communications facility, Courtney mobilizes her friends into action for the first time. What they don't expect are the supervillains Sportsmaster (Neil Hopkins) and Tigress (Joy Osmanski), who serve as the heroes' first major challenge. They also happen to be the parents of Blue Valley High's most valuable football player, Artemis.

"The Justice Society" serves up the big superhero ensemble moment Stargirl fans have been itching for, complete with a comic book splash page-inspired "hero shot" of the team standing together (with Pat Dugan armored up in S.T.R.I.P.E.). Fans of the Arrowverse will recognize this as the moment teased in the "Crisis on Infinite Earths" crossover, and anyone who's seen The Avengers will recognize its familiarity almost instantly.

But the feel-good moments are fleeting, and Stargirl flounders is in delivering a satisfying spectacle of the brawl.

What Stargirl gets right

In a lesson that most superhero films and TV shows still need to learn, Stargirl knows how it uses powers creatively.

For years the Marvel Cinematic Universe has cleverly portrayed superpowers on the big screen. The MCU understands the possibilities and limitations of an individual's powerset; just because the Falcon can throw a punch doesn't mean he's just going to punch bad guys every time. If you see the Falcon in action, chances are he's flying or maneuvering around his enemies.

The DCEU, unfortunately, doesn't understand this. Warner Bros. often treats its heroes like blunt objects. There is almost no difference between a Wonder Woman punch and an Aquaman punch. Shazam! is an exception, and clearly had fun with its protagonist's traditional array of superpowers (see Billy Batson learning to fly under pressure). But aside from Cyborg's ability to hack computers and Batman's wealth, there was virtually no difference in how any of the Justice League fought.

Stargirl has fun with its powers while still establishing rules. Though the show is clearly working on a TV budget, it's smart enough to...

This is all very important to the rules of superhero media, and Stargirl plays it by the book in a moment that is both fun to watch and necessary for its stakes and story going forward.

What Stargirl gets wrong

It should be said that this is a nit-picky issue that involves the question of the safety of cast and crew. We aren't condoning that stunt actors be put in more danger. If the choreography in "The Justice Society" was the only way to get the shots the show needed while maintaining the safety and well-being of the crew, then there's no problem.

The nitpick is that the fights still, even after the pilot, feel weightless and lack any visual impact. There's a specific exchange in the climactic fight — when Stargirl is caught between Tigress and Sportsmaster — that looks unconvincingly rehearsed. It's almost like everyone is fighting in zero gravity, or under tons of water pressure.

It's a small moment. It comes and goes and the show moves on. But when even Stargirl sister shows like Arrow and Batwoman pushed the envelope of what's possible in TV superhero action, it is disappointing that Stargirl fails to uphold that legacy.

Ultimately, bad fight scenes don't hold back Stargirl. The show still marches on with exactly the same energy and spirit it's had for weeks. (When the fight is over and the heroes retreat to Pat's garage, Pat and Courtney have a wonderfully funny dialogue about superhero leadership and responsibility.) And Stargirl never once declared it was ever going to outdo movies like The Raid and John Wick.

But as Stargirl hits the halfway mark of its 13-episode run, it will be interesting to see just how much more the further inclusion of superpowers will make or break the action that defines any comic book TV show.

Stargirl streams Sunday nights on DC Universe and Tuesdays on The CW.