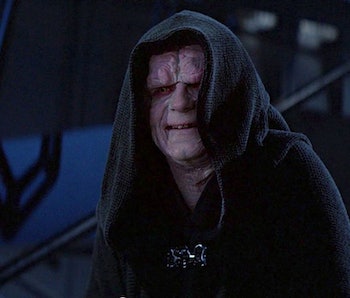 Palpatine's influence has loomed large over the entire Star Wars universe for decades, but now that he's for sure dead and there's plenty more Star Wars on the way, there's a vacancy in the Ommin throne. Who will be the newest arch-nemesis of the Jedi and the Rebel Alliance? The answer could lie in the glorious '90s era of the Extended Universe, now known as non-canon Legends.

Prince Xizor (pronounced shee-zor) of Falleen was about as powerful as anyone without Force powers could be in the world of Star Wars. He was born into wealth and expanded his influence through an empire in transportation. In a world obsessed with mystical forces, he was the scariest thing imaginable: a businessman.

Constantly ambitious and power-hungry, Xizor became a major player in the Black Sun organized crime syndicate and, eventually, a galactic mob boss. Meanwhile, he lost his entire family due to an accident at a biowarfare plant at the service of Darth Vader. So while he played the villain in multiple Star Wars properties, he was stoking a vendetta of his own.

Xizor played both sides throughout the entire Empire era. In the novel Shadows of the Empire, which was adapted into a comic series, he advised Palpatine to allow the Rebels to have the plans to the second Death Star as part of the Emperor's trap in Return of the Jedi. This was dually motivated: it would curry favor with Palpatine should they succeed, and the Rebels should they fail.

Even when he pledged his devotion to Palpatine, he was met with skepticism. The Emperor deemed him too devious to be obedient, and if someone's too devious for Palpatine, you know they're bad.

Xizor's death is murky. His demise supposedly came in a final clash with Darth Vader after Vader learned he was going to target Luke Skywalker. His body was recovered, though, so he could very well still be alive.

However, there's still the pesky obstacle of canon. Xisor is not accepted as part of Disney's canon, but he's gotten quite close: a minifigure of him was used to fill out the background in the Mos Espa scene of The Phantom Menace, but never seen clearly. More recently, a recipe for "Xizor Salad" appeared in the Galaxy's Edge Cookbook, though it was supposedly named after a "crime lord of legend." It may be the weirdest way a character be canonized, but it still counts as a mention.

Should he be brought into canon proper, Xizor could provide the perfect villain for a new era of Star Wars. As a Falleen, he has an extended life span, so he's able to survive at least until 120 years after the events of The Rise of Skywalker if the new films in the franchise have a flash-forward.

It also would be interesting to see an antagonist who isn't Force-sensitive. There's always been a duality of Jedi vs. Sith, but the Force dyad between Rey and Kylo Ren blurred those lines and showed the true nuance in the Force. A villain who eschews the Force altogether and opts for strategy and tactics instead would be a refreshing change.

After all, it was Palpatine's devotion to the Sith that more or less led to his downfall. Someone who was even too devious for Palpatine suggests a new phase in Star Wars, one of politics and intrigue, but still plenty of combat.