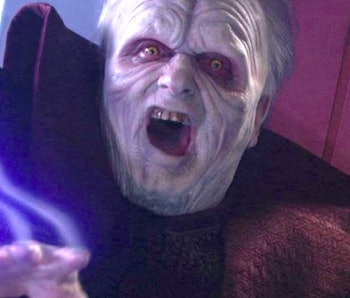 Darth Sidious's dark Sith robes are as iconic as Vader's mask or Leia's braided buns. However, his not-so-secret double life as Senator Sheev Palpatine means that in the prequels, he's only wearing them half the time.

Palp's robes provide a visual clue to which alter ego he's portraying at any given moment. And while we only see him donning the robes over his Senate finery once, but it reveals a lot about his true nature.

One of the most important scenes in Revenge of the Sith is the moment Anakin Skywalker receives the name Darth Vader from his new Sith master. Anakin kneels in front of Palpatine, who gives him his new title and reminds him the Jedi are now the enemy of the Republic right before sending Vader off to the Jedi Temple to dice up some younglings.

It's pretty standard Palpatine dialogue, but Reddit user Prior-Branch recently took a deep dive into a truly odd moment from this key Revenge of the Sith scene.

Halfway through the conversation, Palps puts on his Sith robe and flips up the hood. There's no reason to do it. They're in the Emperor's private quarters, and Anakin knows his true identity. It seems he just wanted to put it on to truly immerse himself in the Darth Sidious role.

We knew Palpatine had a flair for the dramatic, but this is over-the-top even by his standards. Elsewhere in the Star Wars films, Sheev never seemed quite so conscious of his performance. He was simply dramatic by virtue of being evil.

This moment hints at the thought and effort behind all these theatrics. It's almost like watching Sheev sit in his bedroom practicing his evil laugh.

We know Palpatine is deliberate and meticulous in his evildoing, and this is further proof of it. But there's more meat on the bone here. His obsession with image brings to mind a key moment from Rise of Skywalker, when he used Rey and Kylo's life force to revive himself.

Look closely, and his robes seem to transform with an interesting red motif. Did the robes revive with him? Or did he change to greet his cultists in his Sith best?

Here's a more detailed shot of one of his outfits from Revenge of the Sith: Palps has had a thing for crimson in his outfits for decades now.

This is what makes Palpatine the quintessential Star Wars villain: He's power-hungry, but also vain. He glories in making onlookers cringe at that melted, craggy face. Along with his thirst for glory comes a thirst to be remembered at his best, and even if it seems silly, that can come across as preening vanity. Apparently, under his Ommin harness he's stashed away a couple of wardrobe changes in case of emergency, and there's no better villain move than that.