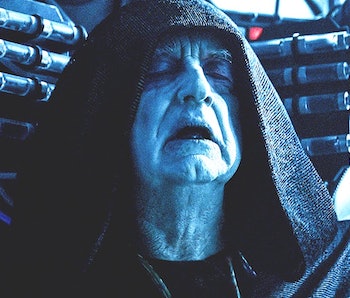 Palpatine's return was one of the biggest twists in The Rise of Skywalker, but it left fans with a lot of questions. How exactly did he survive? How exactly is he related to Rey, again? Several of these questions were answered in the Rise of Skywalker novelization by Rae Carson, but we were still left to wonder what wily old Sheev has been up to for the last 30 years. A new fan theory makes a compelling argument rooted in theoretical physics to explain this lingering Star Wars mystery.

In The Rise of Skywalker, Poe Dameron refers to Palpatine's army as "the largest fleet the galaxy has ever known." Considering the scope of the battles we've seen in the Star Wars universe, that's quite the lofty claim. How could Palpatine have amassed such a following, particularly when his survival was a closely-guarded secret, known to almost no one in the galaxy?

Reddit user Yoda_Seagulls posits that Palpatine's actually been at this project for far longer than the thirty-year span since the Battle of Endor in Return of the Jedi. They quote a passage from The Rise of Skywalker novelization showing Kylo's thought process as he travels to Exegol:

"Besides, while tracking down Vader’s wayfinder, he’d heard whispers that time and distance became near meaningless in exotic space. He had no idea exactly when he’d revert to realspace or what would be waiting for him when he did...”

How could time and space become "near meaningless"? Believe it or not, that's where the science comes in. Albert Einstein theorized that time is not constant, it's relative to velocity and gravity. In other words, the theorist suggests Exegol is experiencing time dilation. It's a concept that has been around for a while, and is probably best illustrated in the movie Interstellar, where an hour on a planet near the intense gravitational pull of a black hole is equal to seven years on Earth.

Time dilation has never been referenced in any of the Star Wars movies, and Kylo's stream of thought tells us this is only a rumor, just "whispers" he's heard now and again. However, black holes do exist within Star Wars canon, and it's also established the far-off reaches of space near Exegol contain all sorts of strange astrophysical anomalies.

However, the other appearances of black holes within Star Wars throw a bit of a wrench into matters. In Solo, young Han and his crew escape the pull of a black hole, but time doesn't seem to be affected when they return to civilization. Perhaps there's something special about this particular region of space that cultivates time dilation.

Just like the Force, theoretical physics is all around us and works in ways that are little understood and tough to grasp. If we can accept the Force, why not accept some real-life mysterious science as well?