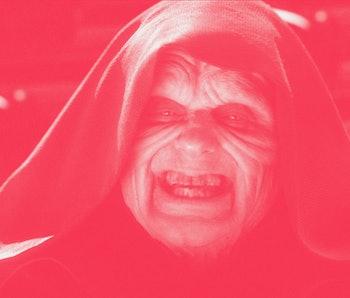 From the start of The Phantom Menace to the end of The Rise of Skywalker, Sheev Palpatine's life has been a series of meteoric successes and catastrophic failures. Starting with the genocide of Order 66, his empire grew into a fascist regime. Then he was forced back to obscurity after the Battle of Endor, only to rise again, however briefly. It may seem like his last appearance was again a failure, but a provocative new fan theory makes a convincing case otherwise.

Redditor bruh-moment6942069 suggests everything in the final confrontation between Rey and Palpatine went exactly as he planned. Having him kill her was part of his scheme, so he could transfer his soul into Rey and lie dormant there for the future. Perhaps in a future movie, we'll see Rey completely change course to Dark Rey as the Palpatine within her revives.

This read on the Rise of Skywalker ending gets even more thought-provoking when combined with another fan theory, which points out the parallels between the three trilogies. Redditor madamz argued that while numerous fans criticized the sequel trilogy as a rehash of the Original Trilogy, on closer inspection, Palpatine's choices seem ripped out of the prequels.

In both cases, Palpatine had a sanitized public persona to establish trust. In the prequels, that was the Chancellor Palpatine alter ego, when really he was Darth Sidious. In the sequel trilogy, he instead used Snoke as a Wizard-of-Oz-like intimidation figure. He also targeted a young Skywalker, who had become disillusioned with the Jedi, first Anakin, then Ben.

The Inverse Analysis — In both trilogies, Palpatine manipulated the political situation to his advantage, whether it be with the Clone Wars or the rise of the First Order. He used those distractions to enact his ultimate power plays. Considering how successful Order 66 was, the analogy would carry over to the sequel trilogy: that plan could have been a success too. That means if we see Rey again, it could also mean the return of Palpatine.