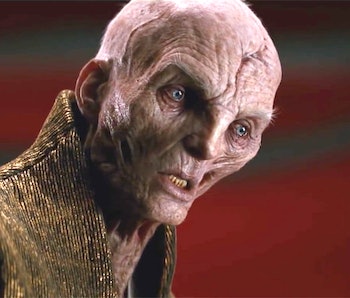 Palpatine's plan in The Rise of Skywalker may have been farfetched, involving soul transfers and massive fleets, but it was pretty effective in the end. Snoke positioned himself as the new arch-nemesis of Rey and the Jedi, only to be sliced in two in The Last Jedi. Now, a new Star Wars fan theory offers a compelling explanation for Snoke's true identity and purpose, which the sequels only glossed over.

Redditor skywalkinondeezhatrz argues Snoke was his own sentient being, and used one key line to prove his point: Palpatine telling Kylo he's "been every voice you've ever heard inside your head" while doing his best impression of Snoke and Darth Vader. This moment early on in The Rise of Skywalker seems like it proves Sheev was Snoke, but a closer reading of the line suggests far more nuance.

Sure, Palpatine spoke to Kylo in Snoke's voice, but it was every voice he heard "inside his head." The Snoke we see on screen who confronts Kylo and Rey is his own person, though brainwashed by Palpatine.

In the same conversation, Palpatine triumphantly claims he "made Snoke" and the camera pans over more pickled reject Snokes in tanks. This doesn't necessarily mean Snoke isn't his own being, just a clone, nonetheless capable of his own thoughts and emotions.

This is further proven in the comic The Rise of Kylo Ren #2, when Snoke reveals that he wasn't born Snoke, he became Snoke. This doesn't necessarily conflict with the Snoke clone reveal, it doesn't look like there was any birthing involved in those Snokes' creations. Instead, they were created by Palpatine.

However, Snoke also claims he "witnessed the rise and fall of the Galactic Empire," so it's unlikely he was born of those clones. The theory suggests he actually had a former life, like Palpatine, but had it extended through cloning. So he had another life, another name, but over time in alliance with Palpatine, became Snoke.

The Inverse Analysis — Snoke's origin has always felt murky and contradictory: the comics said he had a life before, but the movies clearly suggested he was created through cloning. This theory may be complex, but it incorporates every bit of Snoke lore that's been revealed.

Could this be the last nail in the Snoke theory coffin? Well, probably not. As Luke says, "no one's ever really gone." The same is also true of Snoke theorists.