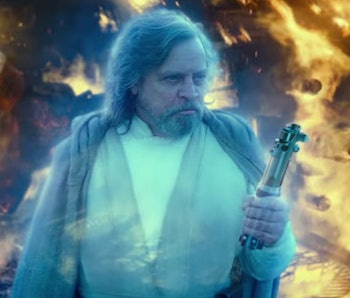 The Force is the most mysterious element of the Star Wars universe. It enables jaw-dropping reveals, revivals, and reunions, but how it truly works is difficult to decipher.

How was Anakin able to become a Force ghost at the end of Return of the Jedi despite not being taught? An intriguing new theory may provide an explanation that sheds a whole new light on the nine Skywalker Saga films and the animated shows.

Redditor u/reelfilmosopher argues that balance in the Force isn't based on the Light side vs. the Dark side. Instead, it's a matter of the Cosmic Force vs the Living Force. These aspects of the Force were detailed in "Voices," the Season 6 episode of The Clone Wars when Yoda first senses Qui-Gon Jinn's presence. Qui-Gon explains to Yoda that even after death, the Cosmic Force and the Living Force intermingle, allowing him to communicate via midi-chlorians.

These distinct sides of the Force are part of Star Wars canon. The Living Force is the free will aspect, the way each Force user forges their own path and finds their own way. All life has Living Force, but Force users can control it and use it to their own benefit as they see fit. Cosmic Force, on the other hand, speaks to the interconnectedness of all things and preordained prophecies like the "Chosen One."

This theory argues that the balance between Cosmic and Living Force is critical to one's ability to manifest as a Force ghost after death.

While this doesn't exactly equal Jedi vs Sith, each faction favors one aspect of the Force over the other. The Jedi prioritize Cosmic Force, believing heavily in prophecy and destiny and using midi-chlorian count as a barometer of Force ability. The Sith focus more on Living Force: ambition, free will, and accumulating power.

Unlike most other Jedi, Qui-Gon was a student of the Living Force. In The Phantom Menace, he reminds his padawan Obi-Wan Kenobi to be mindful of the Living Force in order to stay present in the here and now. Of all Force users, he's probably the most balanced between the two aspects, which explains his return in The Clone Wars.

When you think about it, all the Force Ghosts we've seen onscreen have been Jedi who didn't follow the teachings by the book:

Each of these characters were ostensibly Jedi in some sense but sought out their own path, not confined to just the Cosmic Force.

There's evidence in this Star Wars theory that the secret to Force ghosting lies in the balance between Cosmic Force and Living Force, and isn't necessarily something that can be taught. Even if it isn't the canon explanation for how Force ghosting works, it's a valuable aspect of the Force to know about to understand the Star Wars universe even deeper — and a clever loophole for anyone still annoyed that Anakin was allowed to skip his Force ghost training.

All nine Star Wars movies are streaming now on Disney+.