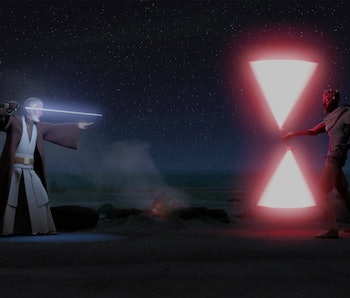 When Obi-Wan Kenobi faced off against Maul for the final time on Star Wars Rebels, he clearly had his old master Qui-Gon Jinn on his mind. A making-of video about Rebels Season 3 reveals just how much Obi-Wan changed while sitting around on Tatooine before Maul showed up to find his revenge.

In a behind-the-scenes video about how Lucasfilm brought this long-awaited battle to the small screen, Rebels executive producer Dave Filoni explained his inspiration for the scene.

“The fight that leapt to my mind was Kyuzo fighting the other man in the field in the film Seven Samurai,” Filoni says. “It’s the very still movements of the samurai who’s moving with intention and grace. It’s contrasted versus the anger in the one man. That guy’s moving his feet a lot and he doesn’t have a steady position.

“Obi-Wan has intention; he is calm, he is centered. Maul is on the edge, Maul is angry, Maul is getting angry.”

Series animation supervisor Keith Kellogg goes on to explain the intention behind Obi-Wan’s every move in the desert. He pays homage to Ewan McGregor’s time as Obi-Wan in the prequel trilogy, Alec Guinness’s slow, methodical movement in the original trilogy, and, finally, his old master Qui-Gon Jinn (Liam Neeson) from Star Wars: The Phantom Menace.

And it’s this methodical approach that helps Obi-Wan come out on top yet again.

Star Wars Rebels Season 3 will be available on Blu-ray August 29.