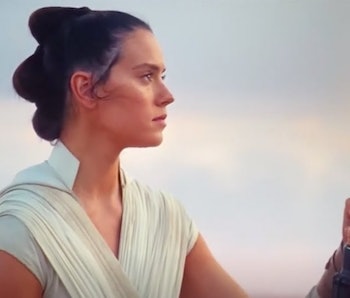 When Rey’s new lightsaber color was revealed at the end of Star Wars: The Rise of Skywalker, fans wondered what it might reveal about her future. While the sequel trilogy never fully explained the reason for the cool new blade, multi-colored lightsabers aren’t new to the canon, a new theory suggests Lucasfilm’s upcoming High Republic publishing initiative will finally explain the significance behind Rey’s lightsaber.

Warning! Speculative spoilers ahead for Star Wars: The High Republic.

At the very end of Rise of Skywalker, Rey buried Luke and Leia’s lightsabers on Tatooine before brandishing her very own new yellow blade. While it was confirmation that Rey wasn’t sticking with a hand-me-down saber, the color confused many fans.

Reddit user cbfw86 argues the yellow lightsaber’s meaning will connect directly with the High Republic story initiative. The teaser images and trailer for the project offered our first look at a bunch of new characters, all of whom lived two hundred years before the Galactic Civil War took place. Several of them are holding — you guessed it — yellow lightsabers. But, what does it all mean?

The theorist says the Jedi stopped using yellow sabers as the Force grew more imbalanced over time. In fact, the decline of Jedi power may have begun during the time period the stories of High Republic will take place. The trailer did tease a Great Disaster, after all. Rey’s yellow lightsaber might mean that she’s finally brought balance to the Force and reestablished the power of the Jedi once more.

Given that we're already seeing yellow blades in the promotional materials for High Republic, it's likely the series will expand on the meaning behind the color. After all, Rey did hear the voices of the various Jedi before taking down Emperor Palpatine, so it’s not a stretch to believe the yellow color signifies peace within the Force.

The Clone Wars established that yellow lightsabers were used by Jedi Temple Guards, aka knights committed to the Jedi Order. Meanwhile, the Legends canon game Knights of the Old Republic also introduced the idea that lightsaber colors have varying meanings, and reflected one's personality and rank within the Jedi Order. In that game, a yellow lightsaber indicated a Jedi was dedicated to scholarship and combat.

However, yellow lightsabers were extremely rare and all but disappeared following the decline of the Jedi Order. While it’s unclear what context The High Republic will bring regarding yellow lightsabers, it’s possible that the project will at least reestablish the rules behind each lightsaber color once and for all.