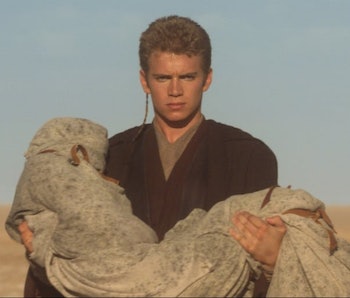 Anakin Skywalker’s journey to becoming Darth Vader didn’t happen overnight. Molded and shaped by external forces that amplified his latent dark inclinations, Anakin first killed in anger after the murder of his mother Shmi in Attack of the Clones. However, a thoughtful new theory suggests that Emperor Sheev Palpatine — and not the Tusken Raiders — who was the one behind Shmi’s death.

After learning of his mother’s kidnapping, Anakin set out to find her, but Shmi died in his arms when he arrived too late. Filled with rage, Anakin infamously slaughtered the men "but the women and the children too." The moment proved to be a pivotal turning point in his fall to the Dark side.

Reddit user Steinrikur theorizes was Palpatine “staged the attack and delivered Shmi to the [Tusken Raiders] to torture.” The implication is that Palpatine likely bribed (or likely threatened) the Tuskens to take Anakin’s mother so as to fuel his anger and fully commit himself to the Dark side.

Palpatine was enormously influential in shaping Anakin’s understanding of the Force and the Dark side, throughout the Star Wars prequel trilogy and beyond. It's possible Palps figured the only way to push him over the edge was to kill Shmi and blame others for his heinous crimes. How else would Anakin become Vader if not for these personal attacks?

The theorist also draws a grim connection between Shmi’s abduction and the deaths of Luke Skywalker’s Uncle Owen and Aunt Beru in A New Hope. They were both presumably killed by Stormtroopers masquerading as Tusken Raiders, though that’s never confirmed.

After saving Luke, Obi-Wan suggested the Tusken Raiders weren’t behind the attack, only that it was meant to look like they were. It’s possible the missing link was Palpatine, who was probably behind both attacks, needing to eradicate anyone from the Skywalker family in hopes to lure them to the Dark side.

What’s more, James Luceno, the author of the Revenge of the Sith Visual Dictionary once implied that “Sidious’s fingerprints are all over Shmi’s abduction.” It’s never been proven, but we all know Palpatine has the resources and is evil enough to set such a plan in motion.

We may never get confirmation regarding whether Palps was truly behind Shmi’s death. But, he certainly had the motive and opportunity to execute such an act to further enforce his influence over Anakin and isolate him from anything keeping him from straying to the Dark side.