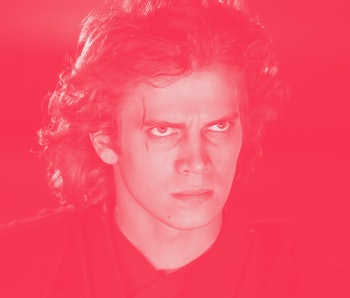 The first six Star Wars movies might be uneven, but they still tell a cohesive story about Anakin Skywalker's rise, fall, and ultimate redemption. The "chosen one" fell to the Dark side and became Darth Vader, but he eventually saw the Light and killed Emperor Palpatine, bringing balance to the Force.

Then came The Rise of Skywalker, revealing that Palps didn't actually die. So does that mean Anakin wasn't the chosen one after all? It's not quite that simple.

Last week, we discussed an intriguing Star Wars theory that Anakin's only chance to balance the Force was on the mysterious planet Mortis in a Clone Wars story; when he gave up that chance, the title of chosen one was passed to Rey. However, a new theory from Reddit user u/GabeMercury argues that Anakin was still ultimately responsible for balancing the Force in The Rise of Skywalker.

Titled, "Why the Sequels do not nullify Anakin’s character arc," this lengthy argument attempts to prove that the events of The Rise of Skywalker only confirm Anakin's importance. One key point made by u/GabeMercury is that Anakin is one of the many Jedi who helps boost Rey's powers, giving her the strength to defeat Palpatine.

In that scene, Anakin even states, “Restore the balance, Rey, as I did." This seems to imply that he really did balance the Force, even if it was only temporary.

More important, however, is Anakin's direction connect to Rey via his son, Luke Skywalker. After all, Luke trained Rey in The Last Jedi and gave her a much-needed pep talk in The Rise of Skywalker. Here's a key section from u/GabeMercury's post:

Anakin was not redeemed by killing Palpatine, he was redeemed by saving Luke. Lucas himself said that Vader could never make up for the things he’d done, but he could save the one person who had shown him love and compassion despite them, and this is how he redeemed himself.

This actually makes a lot of sense. We always assumed that Darth Vader killing his master was the singular action that balanced the Force, but what if saving Luke was far more important than killing Palpatine? When we consider that Palps survived the encounter anyway, this theory makes a lot of sense. It also doubles down on one of the best (and corniest) lines from the Star Wars sequels trilogy:

"That's how we're gonna win. Not fighting what we hate, saving what we love."

The Rise of Skywalker is available now for digital rental.