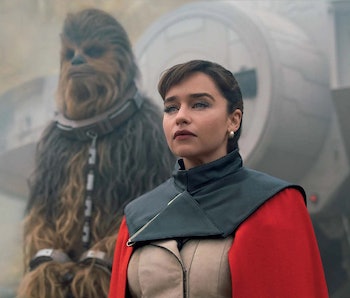 Star Wars has slowly been changing its image. What began as one of the largest and most successful film franchises in cinematic history has slowly shifted into a sandbox for experimenting with television. You want to watch a space western? Check out The Mandalorian. Spies in space? Andor. An anime anthology? Star Wars: Visions fits the bill.

But will we ever see Star Wars return to what made it work in the first place? Plans for new films always seem to fall through. According to the co-writer of one of the more recent Star Wars movies — and the one that arguably sparked this strategic shift — the path back is in a method recently adopted by the Marvel Cinematic Universe.

In conversation with The Hollywood Reporter, Jonathan Kasdan, co-writer of Solo: A Star Wars Story and current showrunner for Disney+’s Willow series, said that his ideal future for Star Wars wouldn’t prioritize movies or television, but instead a third option: Short-form cinematic storytelling.

“I would love to see Lucasfilm embrace a short-form novella version for telling some of their stories,” he said, highlighting the recent MCU Halloween special Werewolf By Night as an example.

This would be a new approach for Star Wars. Though shorter adventures are more common in animated shows like Visions or The Clone Wars, live-action episodes are expected to carry on a larger narrative. Streaming series may go on a few side quests, but ultimately they’re treated as eight-hour movies.

If Star Wars released the occasional one-shot special, it would wean viewers off the traditional TV approach, where weekly gratification is expected, and shift into a mode that admires stories as their own entities, much like the movies were once considered.

What could a Star Wars one-off look like? A holiday special wouldn’t be the best idea considering the franchise’s history, but the occasional hour-long adventure or live-action anthology series would be a fun change of pace. Kasdan pointed out a desire to return to Solo’s Qi’ra, and a special would be the best way to complete the story of a minor yet intriguing character without having to organize an entire theatrical feature.

Maybe Star Wars needs to adopt the release method its comic books use. Sometimes you have serialized stories, and sometimes there are huge blockbuster events, but every now and then you just want to consume a single standalone story. One-shot live-action specials would be the obvious and relatively easy remedy to this gap in Star Wars media.

Solo: A Star Wars Story is now streaming on Disney+.