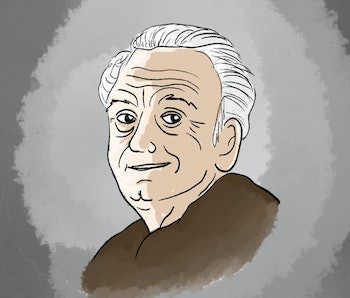 One of the biggest mysteries surrounding Star Wars is the "Chosen One" prophecy. In The Phantom Menace, we learn the Chosen One would bring balance to the Force. Pretty much every Jedi we encounter throughout the prequels assumes that Anakin is this Chosen One. However, it's never totally confirmed by the movies themselves, and this has inspired all sorts of fan theories claiming it could be Luke or Rey. But the Chosen One could very well be the nefarious old coot who connects all three protagonists, Emperor Sheev Palpatine.

The theory that Palpatine could be the Chosen One isn't new, but the evidence recently proposed by redditor CuckMeWithFacts adds even more weight and rationale to this idea. Yes, he did start the Great Jedi Purge through Order 66, but isn't that in a way balancing the Force? There were only a few Sith at that time, so seeking to slaughter as many Jedi as possible would, in a roundabout way, balance the two powers.

It's not the most pacifist way of bringing peace and harmony to the galaxy, but knowing Palpatine's Sith mind, it's not too difficult to see his reasoning. Palpatine's goal was Sith supremacy of the universe, but prophecies don't care what your plan is. Even if he didn't realize it, he was balancing the Force.

This also explains why he was brought back in Rise of Skywalker. Again, it wasn't his intention, but the work of the Chosen One wasn't done, so he was brought back. In the sequel trilogy, it's established Rey is the titular "Last Jedi" and Palpatine says "all of the Sith live in me" so there is balance to the Force. However, Rey is in of herself a Palpatine, and exists completely outside of the formal Sith and Jedi teachings.

This is the crux of this version of the theory: when Palpatine dies and Rey is left standing as the last of the formal Jedi/Sith dichotomy, she herself is balanced within the Force. Gone are the days of the Jedi Council taking toddlers from their families to be trained, and by the same token, the Sith no longer exist to stoke fear and hate in their own kind. The slate's wiped clean, there's balance in the Force.

The Inverse Analysis — Speculating about who the Chosen One is will always be a source of debate in the Star Wars fandom, even if George Lucas says it's Anakin. But in the end, does it really matter who the prophecy is about? The very fact arguments can be made for basically any Force-using character in the 9 films proves achieving balance in the Force has been a group effort from Skywalkers and Palpatines alike, resulting in Rey, who in a way is both.